The Federal Communications Commission (FCC) commenced its latest 5G mmWave spectrum auction today. This morning, Auction 103 bidding began on spectrum in the upper 37 GHz, 39 GHz, and 47 GHz bands.  Auction 103 is the largest auction of millimeter wave spectrum the FCC has conducted. The Commission is making 3,400 MHz of millimeter-wave spectrum available through this auction.   At the end of the day there were $715,333,400 in second round bids at Auction 103, which had two rounds of bidding on Tuesday.  It’s moving to three rounds on Wednesday. Real-time results from the auction are available here. 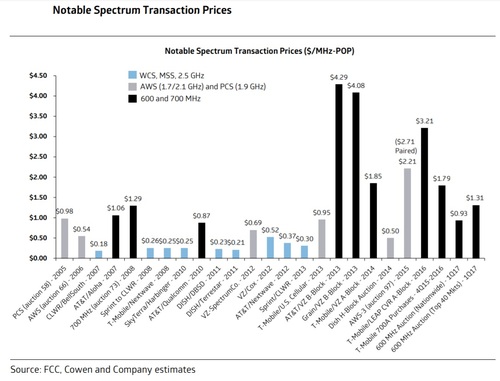 The full list the 35 qualified bidders for Auction 103 is here. The FCC won’t release the identities of the bidders until the auction is over. And analysts continue to believe that overall demand for mmWave spectrum is cooling as more and more mmWave spectrum becomes available, and the industry’s attention turns to other types of spectrum — specifically midband spectrum for 5G.

“There’s so much of it [millimeter wave spectrum] that’s already been brought to the marketplace that hasn’t even started to be used yet,” Brian Goemmer, president of spectrum analysis company AllNet Insights & Analytics, told FierceWireless in October.

Analysts at Wall Street brokerage firm Raymond James wrote in an October report that there’s “not much treasure expected in these waters.” They estimate that the FCC’s newest mmWave spectrum auction will raise around $3 billion in total bids — slightly above previous mmWave auctions but well below auctions for mid-band and low-band spectrum. 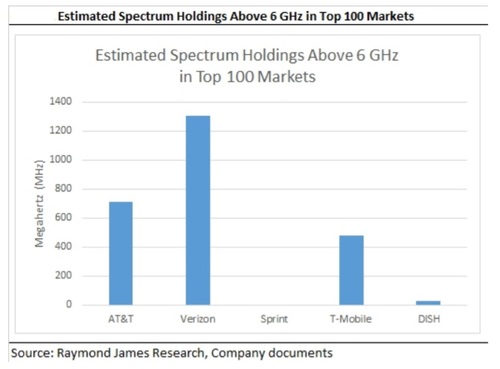 Today’s spectrum auction shows that America is continuing to lead the world in 5G, the next generation of wireless connectivity. These airwaves will be critical in deploying 5G services and applications. Auctioning the 39 GHz and upper 37 GHz bands together presents a critical opportunity for 5G deployment as it represents the largest amount of contiguous spectrum available in the millimeter-wave bands.

Notably, we’re setting up the Upper 37 GHz, 39 GHz, and 47 GHz auction to be our second ever incentive auction. This one will be different from the broadcast incentive auction that Congress authorized years ago, but it’ll have the same worthy goal: clearing or repacking existing licensees to make spectrum as useful as possible, boosting competition and benefiting consumers.

Pushing more spectrum into the commercial marketplace is a key component of our 5G FAST plan to advance American leadership in the next generation of wireless connectivity. Earlier this year, we concluded our first-ever high-band 5G auctions of the 28 GHz and 24 GHz bands. Next year, we look forward to initiating two mid-band spectrum auctions—the 3.5 GHz auction on June 25, 2020, and an auction in the 3.7-4.2 GHz band in the latter part of 2020. These and other steps will help us stay ahead of the spectrum curve and allow wireless innovation to thrive on our shores.”

Light Reading’s Mike Dano notes that most of the rest of the world is moving forward with 5G in midband spectrum, not mmWave spectrum. For example, China and South Korea are both mainly using the 3.5GHz band for their respective 5G buildouts.

Millimeter Wave Spectrum Auction Blasts Past $1.5B, Shows No Signs of Cooling

The FCC’s ongoing auction of millimeter-wave (mmWave) spectrum this week shot past the $1.5 billion-mark in terms of total bids placed, and the pace of action in the event hasn’t slowed down since it started on Monday. The spectrum will likely be put to use in 5G networks.

According to spectrum expert Stephen Wilkus of Spectrum Financial Partners, bidders in the FCC’s latest spectrum auction have been increasing their bids by 10% to 20% during each of the last nine rounds of bidding. He said that the event, which started Monday, has already exceeded his expectations and appears to be headed toward $3 billion in total bids.

However, analyst Tim Farrar with TMF Associates noted that the auction would have to generate between $7 billion and $8 billion in total bids to reach the same valuations as the FCC’s two prior mmWave spectrum auctions.

The FCC’s Auction 101 for 28GHz spectrum licenses raised $703 million in total bids, while its Auction 102 for 24GHz licenses raised $2 billion in bids. The FCC disclosed the results of those auctions this summer. The agency’s Auction 103, which started Monday, offers an astounding 3,400MHz of spectrum across the 37GHz, 39GHz and 47GHz bands — that’s far more overall spectrum than was available in the agency’s two prior mmWave auctions.

With more spectrum coming to market, the overall demand for the mmWave spectrum is declining. (The FCC just this week took steps to release even more spectrum for commercial uses.)

Wilkus of Spectrum Financial Partners said that the average price for spectrum licenses in the FCC’s ongoing Auction 103 clocked in at just $0.00187 per MHz/POP in round eight, which he said was five times lower than the final price of the 24GHz spectrum auction earlier this year.

At issue is the way the value of spectrum is calculated. “MHz/POP” refers to the amount of spectrum available in a license across how many people it covers. For lowband spectrum like 600MHz, those calculations often sit in the $1 range since 600MHz transmissions can travel across miles of geography, and operators generally buy licenses in the band in blocks of 10MHz. Calculations for mmWave spectrum are much different though, considering transmissions in such spectrum can’t travel more than a few thousand feet, and operators often buy such spectrum in 100MHz chunks. That’s why the FCC’s first two mmWave spectrum auctions ended at just $0.01 per MHz-POP.

“Results after the first round of bidding in the FCC’s Auction 103 appear to indicate that the federal coffers may end up lighter than expected,” wrote Spectrum Consortium COO Sasha Javid on LinkedIn after the first day of bidding in Auction 103. Javid manages some of the spectrum holdings of some TV broadcasters. “Round 1 ended with gross proceeds totaling $637,295,800. While this is more than the approximately $284 million raised after Round 1 of Auction 102 (the 24 GHz auction), it is approximately 40% less on a MHz-POP basis. After Round 1, spectrum is selling for just $0.000931 per MHz-POP, compared to $0.001606 per MHz-POP at the same point in Auction 102. With 3400 MHz of spectrum available and just 35 bidders competing, it will be a struggle for Auction 103 to reach anywhere near the disappointing $0.009112 per MHz-POP that Auction 102 reached after 91 rounds.”

The FCC paused its millimeter-wave (mmWave) spectrum auction for the holidays, allowing bidders to take a break from their billion-dollar gambles. Action in the auction — which is nearing $6 billion in total bids — is scheduled to resume Jan. 6.

Already the auction has surpassed some initial estimates that pegged total bids topping out at $3 billion.

However, it appears that the event is slowly cruising toward a finish. “Incremental gross bids by round had been climbing uphill, but then started going downhill fast in recent rounds,” noted the analysts at Wall Street research firm Raymond James in a note this weekend to investors.

A nudge from the Federal Communications Commission has prompted a surge in bidding activity in the ongoing millimeter wave spectrum auction, with bidders broadening their interest to include licenses in geographic areas which they had ignored until this point.

That hasn’t moved the bid total by much, though, with gross proceeds having crept up from around $7.4 billion last week to  $7.5 billion as of the end of round 76 on Wednesday. No bidding was held on Monday due to the federal holiday.

As of Tuesday, the FCC began requiring that bidders use 100% of their eligible bidding activity, instead of the 95% that had been previously required. It’s a use-it-or-lose it scenario in which bidders who don’t use all of their bidding units risk having their eligibility for bid units decreased until it’s in line with their activity, a move which the FCC noted in an auction announcement could “possibly [curtail]or [eliminate]the bidder’s ability to place additional bids in the auction.”

In response, the number of spectrum “products” with more bidding demand than license supply has jumped, from low double-digits late last week to nearly 300 as of the end of round 76. Auction 103 is using a clock format for its first phase, in which bidders compete for the license type and location they desire, with prices automatically increasing each round, until bidders’ demand for licenses at a certain price matches the supply. At that point, the clock phase with end and an assignment phase for specific spectrum blocks will follow.

While major urban market licenses were bid up quickly and then mid-sized markets followed, licenses with low demand have been those in lightly populated, rural and remote areas, and U.S. island territories. There are 832 total spectrum products (the MN and P licenses in each of the 416 geographic Partial Economic Areas) available in the auction, and as of the close of round 76, 284 of those had greater demand than supply, 545 had demand equal to supply and just three had demand less than supply.

Last week, around 40 licenses had no demand at all, according to analysis from Sasha Javid, COO at the Spectrum Consortium and former chief data officer and legal advisor on the FCC’s Incentive Auction Task Force; that figure has since dropped to zero licenses with no demand.

There are still 35 qualified bidders competing in Auction 103.

Stephen Wilkus, CTO at Spectrum Financial Partners, has been tweeting his auction observations and opined on Tuesday that the push from the FCC “will pressure the auction to end in the next few rounds.”

Another five, 30-minute rounds of bidding are scheduled for Thursday, but the FCC has held off on scheduling rounds for Friday as of yet.

There is more spectrum available at 39 GHz than in the other two bands, with 14 blocks of 100 megahertz available, or 5,824 individual licenses. The 47 GHz and upper 37 GHz bands each have 4,160 licenses available, or 10 blocks of 100 megahertz in each PEA. The FCC has divided the spectrum into two categories of licenses: 24 100-MHz licenses in the 37 and 39 GHz frequency blocks, the MN or M/N licenses, and ten 100-MHz licenses in the 47 GHz frequency block, the P licenses.

The FCC has authorized either fixed or mobile use in the bands, and the commission has emphasized the sheer amount of spectrum available: at 3,400 megahertz, Auction 103 puts up the largest amount of spectrum ever offered in an auction.

Information on FCC Auction 103 is available at: https://www.fcc.gov/auction/103/factsheet