GSA’s latest report provides a snapshot of the global status of national usage of spectrum above 6 GHz for 5G services. It is part of a series of reports which separately also cover spectrum bands below 1 GHz and between 1 GHz and 6 GHz. This report reflects a market that is in constant flux (which this author has repeatedly stated would be the case till the most important IMT 2020 recommendations have been approved by ITU-R and ITU-T).

5G deployments in bands above 6 GHz:

Figure 1: Use of 5G spectrum between 24.25 GHz and 29.5 GHz, countries plotted by status of most advanced operator activities 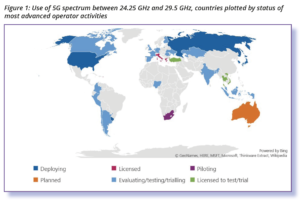 At WRC-2019 in November, delegates identiﬁ ed several new frequency ranges for IMT and IMT-2020 (5G). These encompassed many of the existing 3GPP specified bands plus some new spectrum ranges:
• 24.25–27.5 GHz

Other spectrum being considered by national regulators and international standards bodies, or that has been used in operator trials, is between the 71–86 GHz range.

5G device support for spectrum bands above 6 GHz is still at an early stage. GSA’s GAMBoD database includes 59 announced 3GPP compliant 5G devices that do or will support mmWave spectrum bands. Eleven of those are commercially available. The numbers of devices identiﬁed as supporting speciﬁc bands is much lower, as details of spectrum support is patchy for pre-commercial devices.

In the USA, any bands already used for mobile service can also be deployed for 5G; FCC doesn’t require any particular technology and the choice is driven by carriers. This means multiple historic auctions are relevant for 5G including but not limited to those for spectrum at 28 GHz (March 1998 and May 1999) and 39 GHz (May 2000).

The FCC is currently undertaking a range of activities with a view to opening up extra spectrum for mobile use. In 2016, the FCC adopted its Upper Microwave Flexible Use Rules to make spectrum at 28 GHz, upper 37 GHz and 39 GHz available (including for 5G). Then the new Spectrum Frontier order dated 16 November 2017 put in place plans to open up an additional 1.7 GHz of mmWave spectrum in the 24 GHz and 47 GHz bands for ﬂ exible terrestrial wireless use. FCC also enabled use of spectrum between 64 GHz and 71 GHz by unlicensed devices (subject to restrictions).

In October 2018, the Commission issued a notice of proposed rules that would open up the 5.925–6.425 GHz and 6.425–7.125 GHz bands for unlicensed use, subject to establishing a mechanism to prevent interference with incumbent services. It speciﬁ cally anticipates – depending upon the part of the spectrum concerned – the use of low or standard power WiFi or variants of LTE for indoor or outdoor use.

In June 2018, FCC announced that it is also considering making an additional 2.75 GHz of the 26 GHz and 42 GHz bands available for 5G. In December 2018, FCC announced an incentive auction (Auction 103) covering spectrum at 37 GHz (37.6–38.6 GHz), 39 GHz (38.6–40 GHz) and 47 GHz (47.2–48.2 GHz) in order to free up more spectrum for 5G. Under the incentive auction, existing rights holders in those bands can choose either to relinquish their rights in exchange for a share of the auction revenue or alternatively receive modiﬁ ed licences after the auction consistent with a new band plan and service rules.

Auctions for 37 GHz, 39 GHz and 47 GHz bands are planned by the end of 2019. Procedures for reconﬁguring the 39 GHz band, enabling existing licensees to relinquish or modify their licences were published in March 2019. Technical guides for bidding procedures were published in April 2019, along with the announcement of a process for sharing the spectrum at 37 GHz with the Department of Defense. Timelines for the reconﬁguration of existing rights were published in June 2019.

Planned 5G auctions and their dates:

Spectrum above 6 GHz, and in particular mmWave spectrum, has rapidly become important for mobile telecoms. It is clear, with the number of spectrum awards expected over the coming years, and the agreement of new mmWave spectrum bands at WRC-19, the investment in these spectrum bands by operators and commitments to launch compatible devices by vendors, that the importance of spectrum above 6 GHz is going to continue to grow. GSA will continue to track this trend. This report will be next updated in early 2020.