TeleGeography, a global telecommunications market research and consulting firm, has released its 2021 WAN Manager Survey, revealing that Direct Internet Access (DIA) is gaining ground on MPLS, with 42% of average sites running the product in 2021.

At the same time, survey responses show a clear downtrend in MPLS use, from a dominant high of 82% of sites running the product in 2018 down to 46% in 2021.  It marks the first time this figure has dropped below half of average sites. This shift to DIA reflects the plans of many WAN managers to reduce their reliance on MPLS in their networks.

• For the first time, MPLS usage dipped below half of average sites—46% of sites were running MPLS in 2021.

• MPLS usage at average WAN sites has declined by 5% compounded annually over four years, while DIA and broadband usage has climbed by 3% and 1.5% each year across the same time period.

• WAN managers want more bandwidth. Across MPLS, DIA, and broadband, the percentage of large port sizes being procured is growing, while port sizes 50 Mbps and under are declining 1-3% compounded annually.

• The most common strategy for backing up MPLS is using an alternative connectivity service like DIA or broadband.

TeleGeography’s WAN Manager Survey features analysis based on the experiences of WAN managers from 185 companies with a median revenue of $10 billion USD. The 2021 focuses on IT managers whose day-to-day role covers designing, sourcing, and managing U.S. national, regional, and global corporate wide area computer networks. It also includes 60 new responses across various industries.

TeleGeography’s report highlights how the extension of COVID-related remote work has accelerated many ongoing WAN trends like migration to the cloud, SD-WAN adoption, and incorporation of alternative access technologies into the underlay. To that effect, the team found that DIA and business broadband usage have been on the rise, with DIA experiencing a four-year CAGR increase of 3% and broadband logging an increase of 1.5%.

“Through our survey, we can see that enterprise companies are embracing hybrid networks more and more. MPLS usage in our respondents’ WAN has been declining steadily, and in 2021 we saw a near-equal ratio of MPLS and DIA in the average network. Given these rates, we’ll have an eye on DIA usage to perhaps overtake MPLS in future surveys,” said Elizabeth Thorne, Senior Analyst at TeleGeography. 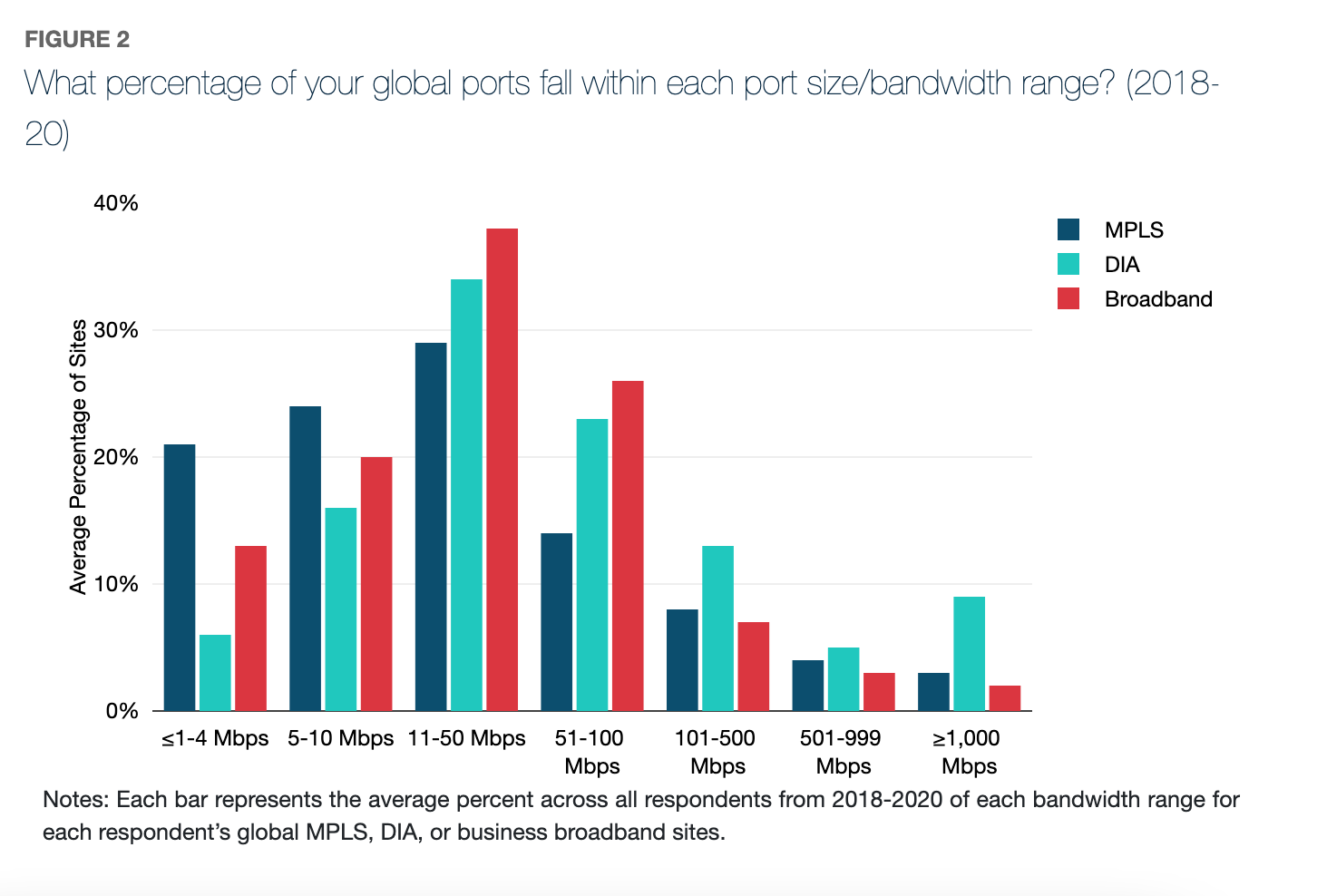 Telegeography asked WAN managers how far along they were in implementing ZTS (Zero Trust Security) or SASE (Secure Access Service Edge) security policies on their network.  Here are the results:

• Implementation of one or more elements of ZTS/SASE on at least some of the respondent’s network jumped from just 8% in 2019 to 35% in 2021, a significant increase in just two years.

• There’s been a narrowing of the knowledge gap. Just 8% of respondents were unfamiliar with ZTS in 2021, compared to one in five in 2019.

• Overall we saw a shift down the deployment pipeline, with reductions in the percentage of respondents who either had not started, or were just beginning their implementation journey.

• In 2021 we introduced the option “Waiting on SD-WAN,” as in past interviews many respondents indicated that their adoption of zero trust policies was incumbent on their SD-WAN deployment. That is reflected in the results, as it was the second most common–28%–stage respondents were in.

“Enterprise networking is evolving, in part due to an increase in remote working. Network managers are facing the challenge of accommodating a remote-friendly, work-from-anywhere environment and many will likely be moving toward internet-first networks and further away from MPLS in the coming years,” said Greg Bryan, Senior Manager at TeleGeography.