By Michael Farrell of Multichannel News

The announced merger of T-Mobile and Sprint, the third- and fourth-largest wireless carriers in the nation, answers many of the scale questions that have dogged the two companies over the past several years. But in creating a carrier with about 100 million customers and valued at a combined $146 billion, the deal bypasses what many had considered to be T-Mobile’s more perfect match: Dish Network.

With a large swath of wireless spectrum, 11 million satellite TV subscribers and 2.2 million customers for its over-the-top video service Sling TV, Dish was seen by many to be a logical target for T-Mobile. Combining the No. 3 wireless carrier, which has obvious video aspirations through its January purchase of Layer3 TV, with Dish would in many minds have created a strong competitor in the ongoing wireless-OTT-traditional video wars.

Investors apparently believed so too. Shares in Dish fell 3% ($1.19 each) to $33.55 per share on April 30, the first trading day after T-Mobile and Sprint announced their deal. The stock has continued to slip in subsequent trading, closing at $33.09 on May 3.

On a conference call to discuss first-quarter results shortly after the Sprint deal was announced, T-Mobile chief financial officer Braxton Carter said the transaction “ratchets up” the wireless provider’s video plans by allowing the combined company to provide customers with an IPTV service via wireline and wireless broadband.

“So T-Mobile’s in the position as a new T-Mobile to be able to offer a quad play, if that’s what the market wants,” Carter said on the call.

The combined company will be controlled by T-Mobile management: CEO John Legere will continue that role in the new entity, as will T-Mobile chief operating officer Mike Sievert. T-Mobile parent Deutsche Telekom will own 42% of the combined company, with Sprint parent Softbank owning 27% and the remaining 31% held by the public. The deal is expected to close in the first half of next year.

This is the two companies’ third time on the merger dance floor together. They scrapped talks in 2014 over regulatory concerns and in 2017 over control issues. While the two have managed to work out their control issues, some analysts are skeptical that the current deal will sail easily through the regulatory process.

BTIG telecom analyst Walt Piecyk gave the merger a less than 40% chance of passing regulatory muster, primarily because he didn’t believe the deal, which will reduce the number of wireless competitors to three from four, will pass the antitrust smell test.

“It doesn’t look like a competitive market right now, and that’s what the regulator may focus on,” Piecyk told CNBC.

Columbia Law professor Tim Wu wrote an op-ed piece for The New York Times urging regulators to block the deal, adding that having four separate competitors has been most beneficial to wireless customers, leading to free unlimited data plans and lower prices. Transforming the wireless business into a “triopoly” like the airline business will only serve to raise prices and lower service.

“Competition has actually worked the way economists say it is supposed to, forcing firms to improve quality or face elimination,” Wu wrote in the Times. “But it takes competitors to compete, which is where blocking mergers comes in.”

Pivotal Research Group CEO and senior media & communications analyst Jeff Wlodarczak has said in research notes over the past year that pairing Dish and T-Mobile would “immediately vault the most disruptive U.S. wireless player into the leading U.S. spectrum position,” and at worst would force rival wireless company Verizon Communications to pay more for the satellite asset.  For now, though, it looks like Dish will remain on its own.  Other scenarios see the satellite company being acquired either by another wireless service provider, like Verizon, or even by the new T-Mobile. The latter scenario wouldn’t take place for at least another year.  Dish has struggled over the past several quarters as the satellite business has dwindled. In the fourth quarter the company lost more than 100,000 satellite-TV subscribers and added 160,000 Sling TV customers.

Dish Misses Out on Buildout Relief

For Dish, a purchase by a wireless carrier would mean relief from its obligation to build its own wireless network. As a result of its success in bidding on spectrum in several of the government’s wireless auctions, Dish faces a March 2020 deadline to build out wireless service in 70% of the market territories it won.

Dish chair Charlie Ergen has said the company will spend about $1 billion on that initial phase, which will be more geared toward IoT services.

For T-Mobile, a Dish purchase would give it an instant video base through the satellite-TV offering, programming contracts with cable networks and the largest OTT service in the country, Sling TV.

But not all analysts believe that a T-Mobile-Dish deal is more palpable. In a research note in November, after T-Mobile and Sprint ended merger talks, MoffettNathanson principal and senior analyst Craig Moffett wrote that he never saw any synergies in combining those companies, other than as a source of additional spectrum.

The argument that the dissolution of the merger was bad news for Dish is equally compelling in that, if Dish does build its wireless network, it would become the fifth player in an already-crowded market, he added.

“However bad one might have imagined the ROI (Return on Investment) for network building, it has to be worse if the industry is more fragmented than expected,” Moffett wrote in November.

Dish’s Spectrum Yet to be Deployed:

Dish has quietly worked to cobble together a significant amount of spectrum via spectrum auctions and secondary-market transactions. The company’s first spectrum purchase was made through EchoStar’s relatively minor purchase of E Block licenses for $700 million in the FCC’s 700 MHz spectrum auction in 2008. But Dish in 2011 spent $2.77 billion to acquire 40 MHz of S-band satellite spectrum from bankrupt TerreStar and DBSD North America. Then, in 2014, Dish was the only bidder in the FCC’s H Block spectrum auction, essentially walking away uncontested with 10 MHz for around $1.6 billion. In 2015, Dish spent roughly $8 billion on AWS-3 spectrum licenses, and then just two years later it committed a whopping $6.2 billion to buy 486 licenses in the FCC’s 600 MHz incentive auction. 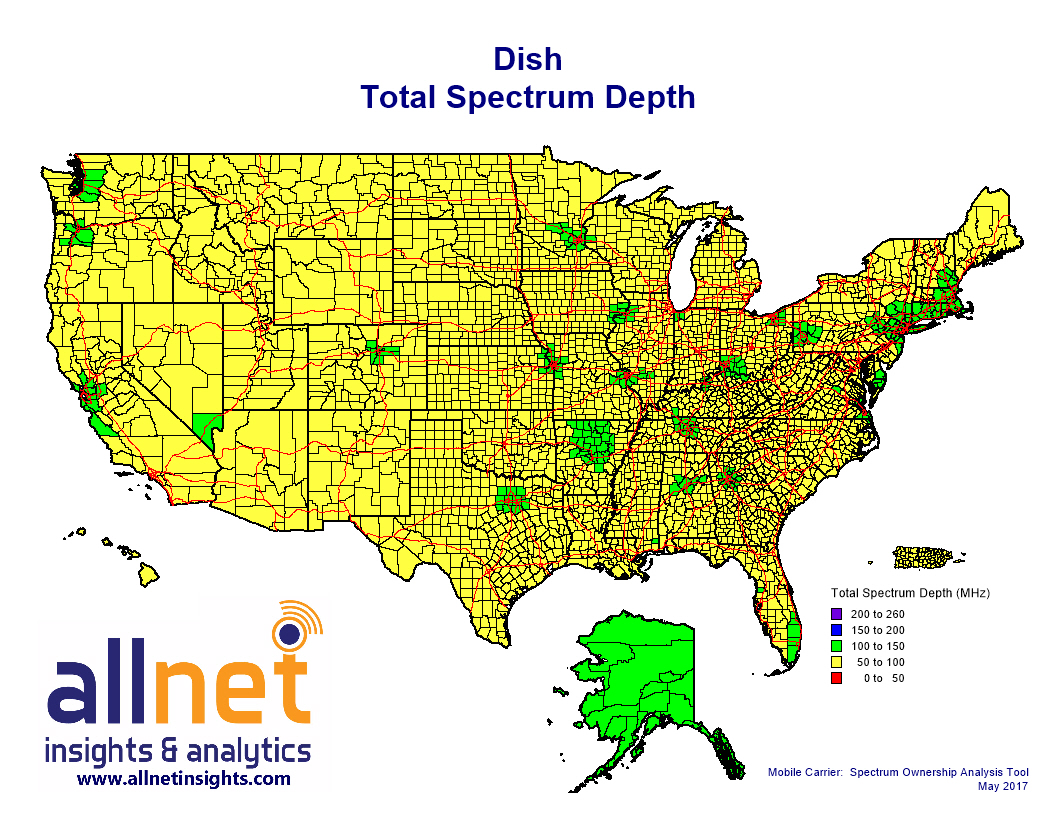 Dish recently outlined plans to build a NB-IoT network using its spectrum to provide connectivity to a wide range of devices other than traditional tablets and smartphones. Some analysts remain skeptical, though, believing that Dish plans to either sell or lease its spectrum, or partner with an existing service provider to join the wireless market.

Dish has to comply with Federal Communications Commission requirements that a network using the spectrum it owns be deployed by 2020, Josh Yatskowitz, an analyst at Bloomberg Intelligence, said last November.