Huawei on Friday unveiled the world’s first “5G solution-ready” commercial 7nm (nanometre) chipset–the Kirin 980, which is believed to be the most powerful smartphone SoC (system-on-a-chip) equipped with Artificial Intelligence (AI) capabilities.  The company has now proven itself as a leader in telecom/network equipment, smart phones and now ultra large scale integrated circuits/System on a Chip (SoC).

“It looks smaller than my nail, but it is the most powerful and intelligent SoC chipset for smartphones introduced so far,” Huawei Consumer Business Group CEO Richard Yu said while unveiling the chipset to a packed audience at the IFA 2018 in Berlin.  Yu confirmed that the first smartphone to be powered by the Kirin 980 chipset will be Huwaei’s Mate 20 series which is expected to be launched next month. 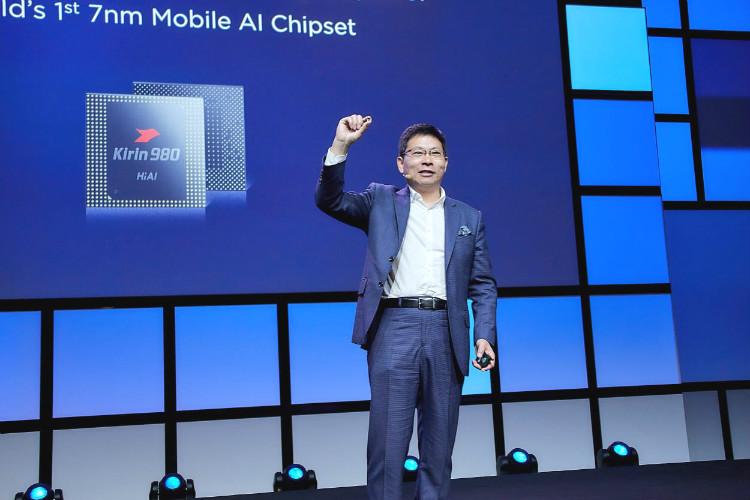 Based on Taiwan Semiconductor Manufacturer Company’s (TSMC) 7nm semiconductor process, Kirin 980 delivers 20 per cent improved SoC performance and 40 per cent more efficiency, said Huawei which surpassed Apple to become the second-largest global smartphone seller behind Samsung in the second quarter of this year.

“Last year, we showed the world the potential of on-device AI with the Kirin 970 and this year, we’ve designed an all-round powerhouse that not only features outstanding AI capabilities, but also brings cutting-edge raw performance to consumers,” Yu told the gathering, adding that the new SoC is equipped with dual NPU (Neural Processing Unit).

“The Kirin 980 is the ultimate engine to power the next-generation productivity and entertainment applications,” Yu added.

The TSMC 7nm process technology enables Kirin 980 to pack 6.9 billion transistors within a “1 square cm die size”, up by 1.6 times from the previous generation.

The Kirin 980 is also the first SoC to embed Cortex-A76 cores, which are 75 per cent more powerful and 58 per cent more efficient compared to their previous generation.

As graphics in mobile games have become more and more sophisticated in recent years, Huawei has integrated the Mali-G76 GPU (graphics processing unit) into the Kirin 980 to deliver improved gaming experiences.

Kirin 980 supports common AI frameworks such as Caffee, Tensorflow and Tensorflow Lite, and provides a suite of tools that simplifies the difficulty of engineering on-device AI, allowing developers to easily tap into the leading processing power of the dual NPU.

Huawei also launched at IFA 2018 AI Cube, its home speaker with 4G router and built-in Alexa that can perform several tasks such turning on the TV or playing music.  The company also introduced new colors and “genuine Italian leather variants of its Huawei P20 Pro phones.

In addition, Yu also introduced the Huawei Locator powered by Internet of Things (IoT) technology that can help people easily locate their belongings, be it their luggage or pets.