Various wireless LANs and WANs are necessary to linking all the Internet of Things (IoT) devices that will give rise to smart cities.  Some of those wireless networks include: Bluetooth Low Energy, ZigBee, Wi‑Fi and cellular technologies are all established, but low power wide area (LPWA) networking technologies, such as Sigfox, LoRa, LTE-M and NB-IoT are emerging as IoT disruptors.

According to analyst ON World, there could be as many as 2.6 billion connected, wireless IoT devices for smart cities, with LPWA networks suitable for 60% of those connections. 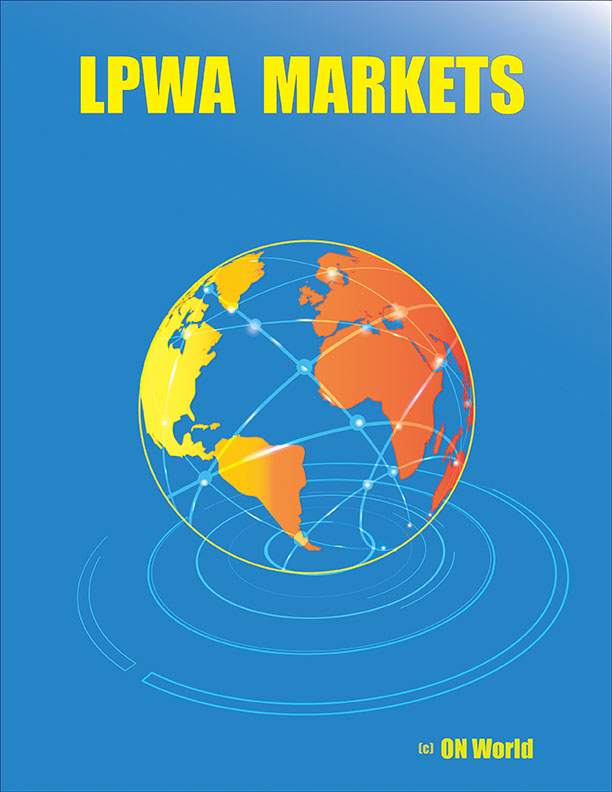 LPWA networks are increasingly used outdoors in parking, utilities, pollution monitoring and other applications that require wireless communication via always-on nodes in a network.

“Different wireless protocols have different benefits, but where the use case is moving sensor data or small amounts of data, LoRa is designed specifically for that,” says Dave Armour, strategic marketing manager for wireless products at Semtech. The company licenses the proprietary LoRa technology and is a founder member of the LoRa Alliance.

LoRa is based on a transceiver design and uses an unlicensed spectrum, allowing users the option to deploy their own gateways or have their own devices communicate with third party networks, explains Samir Hennaoui, product manager, LPWA at Murata Europe. “Some cities have deployed networks based on LoRa that are free to access and service providers have appeared that rent access to their gateways,” he says.

A spread-spectrum modulation scheme supports data rates from 300bit/s to 50kbit/s to overcome the problem of interference in the shared RF band.

Sigfox, a low-cost, wide area M2M technology developed in 2010 by a French company of the same name, probably has the largest market share for LPWA networks today.  Data rates for this technology are 10bit/s to 1kbit/s.

The main differences between the two are range – Sigfox uses narrowband transmission to achieve up to 50km and LoRa has a range of up to 30km – and that LoRa is bi-directional, whereas Sigfox is not.

“Range depends on a number of things,” concedes Armour. With gateways on top of buildings, the range is more than with a gateway inside the building. “In big open areas we are getting tens of kilometres range typically,” he says, “for sending messages from the sensor back to the gateway in the cloud and also getting updates from the cloud back down to the sensor.

“Most technology allows you to send messages back to the network, but LoRa also enables you to receive messages from the network,” says Armour. This, he adds, is a key characteristic, as LoRa will be deployed in devices that are expected to be in long term use, for example parking sensors or occupancy sensors that can be updated over the air (OTA) rather than needing to be physically removed for updates.

The same OTA functionality can be used for security, which Armour describes as a moving target. A multi‑level AES encryption is the default in the protocol. “Encrypted data is sent from the sensor and goes on to the network encrypted. It is only when its gets to the end-user, who has registered the device, that they can unlock the data and decrypt it,” he explains.

“LoRa is designed specifically for moving sensor data, or small amounts of data,” says Armour. “It can do that over a very long range and at exceptionally low power. The consumption depends on the use case, but some of the sensors can run on coin cell batteries for over 10 years,” he says. “The great thing with sensors is that we can install a large number on a gateway in a building and all the data goes easily back into the cloud where you can start to make use of it,” says Armour.

Sensors can be used to adjust heating and lighting according to the number of tenants in a building, or to adjust the billing in multi-occupancy buildings. LoRa is also used for location services, to track goods, using the two-way communications capability.

“LoRa allows you to locate devices reasonably accurately at low power. If your data starts coming from a location that makes no sense to you, that may be because someone is spoofing, or the device has been stolen or moved,” Armour added.

Armour sees LoRa and Wi‑Fi as complementary technologies: “Wi‑Fi is great when you want to move a lot of data (emails, video, music) but that is not power‑efficient or low enough to run on a battery for sensors and devices. The use cases are different but the technologies are complementary,” he argues. “If people have Wi‑Fi, they will use that for smartphones and devices to talk to the internet. All the sensors and low power devices will talk over LoRa back to the internet to exchange data.”

LoRa Silicon and IP from Semtech (licensed to other companies, e.g. Microchip):

Semtech, the only supplier of LoRa silicon intellectual property, has announced its next generation of LoRa chipsets, with reduced receiver current and high power option to extend the sensors’ battery life.  The SX1262 (the +22dBm option), the SX1261 (+15dBm) and the SX1268 (+22dBm, China frequency bands) are claimed to extend the battery life of LoRa-based sensors by up to 30%.

The chipsets have a footprint of 4x4mm, which is 45% less than the earlier device and they can be configured to meet application requirements using the LoRaWAN open standard.  Frequency coverage is 150MHz to 960MHz and a spreading factor of SF5 supports dense networks. The chipsets also support FSK modulation, making them compatible with legacy protocols.

2 thoughts on “IoT for Smart Cities: LoRa with Semtech Silicon as a leading LPWAN”