As global 5G capabilities expand, alignment of what 5G is, what end users should expect and how it should be measured will be critical to adoption

As the first commercial deployments of (pre-standard) 5G start to appear, the stage is set for consumers finally to find out what the powerful next-generation mobile standard promises can bring: an ambitious and far-reaching technological advance that transforms virtually all aspects of human activity—how we experience life, conduct business, create goods, and build societies. In its latest complimentary white paper, “The Promise and Potential of 5G,” business information provider IHS Markit explores the opportunities and challenges surrounding the upcoming global rollout of new 5G wireless networks.

Without question, 5G is helping set the stage for incredible change, but it remains a confusing landscape, with varied and sometimes conflicting interpretations of what 5G is and what to expect from it. This confusion is impacting not just consumers but also complicating the industry’s ability to measure itself against a standard set of 5G expectations and requirements.

To optimize short-term and long-term 5G adoption, it is imperative that clarity regarding what 5G is and when each capability will be available is established for both consumers and the ecosystem. To that end, IHS Markit follows the official 3GPP definition of 5G [1]but also believes that this description needs to be understood within the context of everyday experience and concepts.

[1.] ITU considers 5G to be based on its forthcoming IMT 2020 recommendations.  Those are the only official standards for 5G.

According to the previously referenced IHS Markit 5G white paper, 5G will improve existing services and enable new use cases, such as driverless cars, immersive entertainment, zero-delay virtual reality, uninterrupted video and no-latency gaming. On the industrial front, 5G will be key to expanding and realizing the full promise of the internet of things (IoT), with the technology’s impact to be felt in smart homes, smart cities and smart industries.

“The marketplace implicitly understands 5G represents an unprecedented growth opportunity, with the initial smartphone rollout set to generate record shipment volumes,” said Francis Sideco, vice president, technology  at IHS Markit. “However, fewer people understand the iterative nature of major technology rollouts such as the one we are going through now with 5G—a process involving multiple major updates that will add new capabilities in the coming years. With each of these updates having the potential to significantly disrupt the market’s competitive dynamics, it’s critical for companies to clearly understand the implications of each rollout or risk falling behind the competition.” 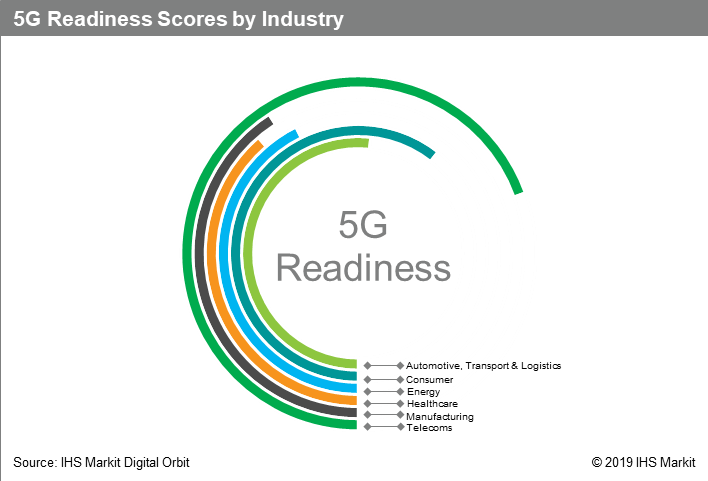 Following initial sales of 37 million first-generation 5G smartphones this year, with initial shipments only now commencing, worldwide shipments will surge to 120 million devices in 2020, IHS Markit forecasts. This rollout will be the fastest ever for a new wireless generation, generating six times more unit shipments than previous record-holder LTE, over a similar timeframe. Benefitting from strong industry momentum and alignment, global 5G smartphone shipments will continue to rise in the coming years, reaching over 525 million devices in 2023. “Despite strong growth, the level of success among individual competitors in the smartphone and infrastructure market will hinge on their ability to shift their business strategies in parallel with the evolution of 5G,” Sideco said. 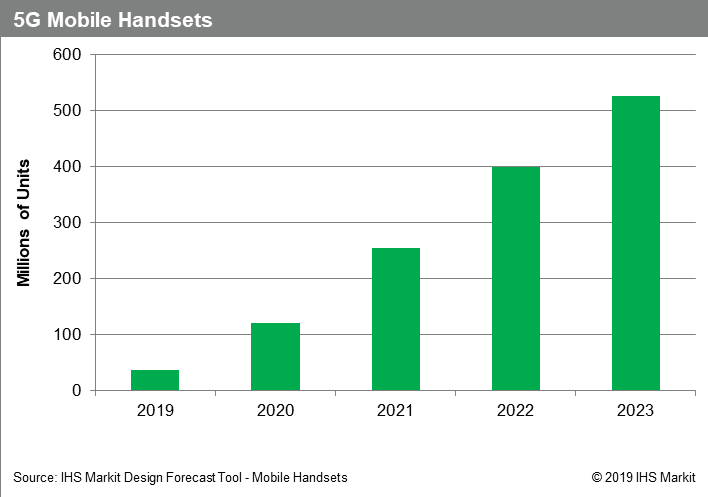 New 5G technical standards (i.e. IMT 2020 from ITU) will eventually enable the creation of applications that could open new opportunities, inform new business models and transform everyday life for multiple industries and billions of users throughout the world. However, many of these capabilities won’t be available in initial 5G rollouts, but instead will arrive in subsequent releases of the standard to be implemented over the next few years.  Each of the releases will deliver new challenges and opportunities not only for the wireless industry but also every industry for which the new use cases are envisioned. To fully realize the potential of these opportunities, competitors will need to understand and capitalize on new capabilities even before they are fully introduced.

The 5G standard’s next release is already on the horizon, with the expected introduction of Release 16 in late 2019. The upcoming release will deliver highly desirable enhancements, including far greater reliability and peak data rates of 20 gigabits-per-second (Gbps) downlink and 10 Gbps uplink. “This next phase of implementation and rollout will trigger a race among mobile network operators to meet and take advantage of these performance enhancements,” Sideco said. “The winners of this race are likely to gain a competitive advantage as they gear up for the next wave of growth.”

Future revisions will spur similar competitive battles, as 5G adds major new capabilities and expands into other markets beyond mobile communications, such as mission-critical applications and massive internet of things (IoT) deployments. “For companies throughout the technology supply chain—from network operators, to smartphone brands, to industrial and automotive device manufacturers and electronics suppliers—it will become increasingly important to understand the changes brought by each phase of the 5G deployment and to be ready to capitalize on the latest capabilities to gain a competitive advantage,” Sideco said.

To learn more about managing the complexities of the 5G era, download the free white paper, “The Promise and Potential of 5G.”

In other 5G related news today….

The Ministry of Internal Affairs and Communications has approved the allocation of spectrum after determining that the companies’ applications met the conditions of the allocation, the Nikkei Asian Review reported.  Japan’s telecom ministry has allocated 5G mobile spectrum to incumbent operators NTT Docomo, KDDI, and Softbank, as well as local e-commerce giant Rakuten.

The four companies plan to invest heavily in 5G, spending a combined 1.6 trillion yen ($14.4 billion) over the next five years. Docomo is planning the largest spend, with goals to invest at least 795 billion yen in 5G over this time. Japan’s mobile operators have set aside $14 billion to invest in 5G networks over five years. (Photo by Ken Kobayashi)

The conditions for the allocation of spectrum included commitments to commence services in every prefecture of the nation within two years, and set up 5G base stations in at least half the country within five years.

According to the report, Docomo and KDDI are each targeting more than 90% 5G population coverage by the end of the five years, while SoftBank is targeting 64% coverage while Rakuten is aiming for 56%.

The Japanese government wants industry to build out 5G infrastructure widely, from big metropolitan areas to rural regions. It expects the technology, which offers speeds up to 100 times as fast as 4G, to enable self-driving buses and telemedicine, and to help Japan combat its worker shortage.

The conditions required for receiving 5G spectrum included starting services in every prefecture within two years. The communications ministry also divided Japan into 4,500 blocks, requiring operators to set up base stations in at least half of them within five years. Docomo and KDDI each plan to achieve coverage of more than 90% in that time. SoftBank and Rakuten set less ambitious goals, at 64% and 56%, respectively.  The requirement will force mobile operators to balance making heavy investments with attaining profits.