A decision by Russian telco MTS to select Huawei Technologies to develop its 5G network comes just as the U.S. ban of the Chinese telecom gear provider could leave the U.S. lagging behind other global powers, analysts say in a CNN article.

“We both add momentum to strategic cooperation between the two companies in high tech, thus building a foundation for commercial 5G rollouts in Russia in the nearest future,” Kornya said in an emailed statement. Guo highlighted that Huawei’s more than 16,000 5G-related patents make it “number one worldwide.” “We hope that our joined efforts will help Russia enter the 5G era sooner,” he added. 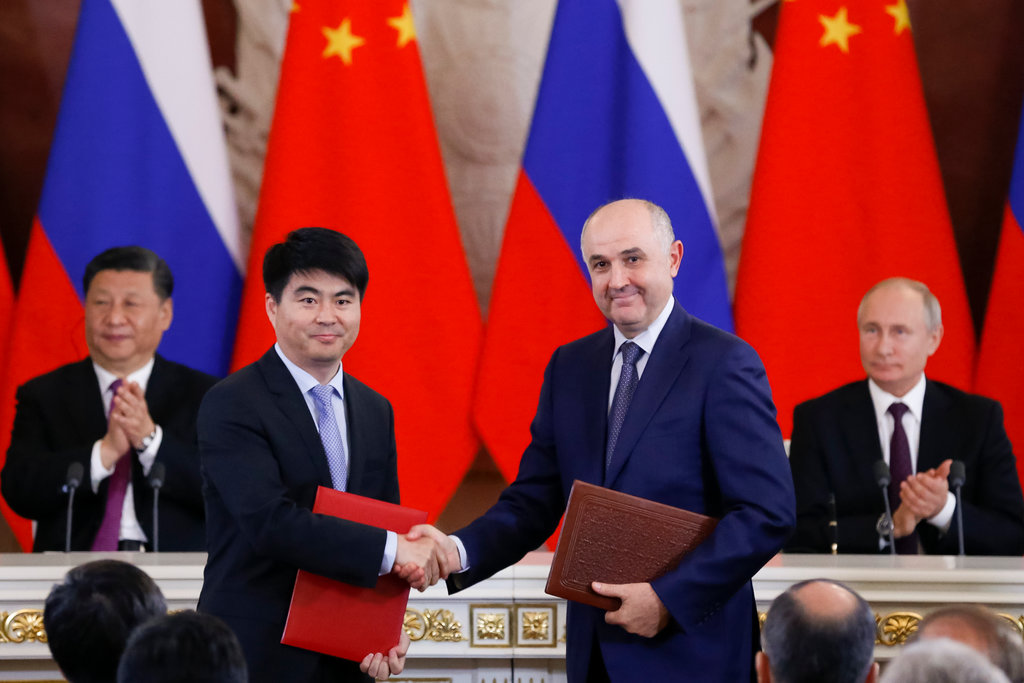 Guo Ping -chairman of Huawei- shaking hands with Alexei Kornya- head of MTS- at the Kremlin in Moscow, Russia.

The Kremlin noted that several business deals had been signed in a ceremony attended by Russia President Vladimir V. Putin and China Premier Mr. Xi.

It’s not clear Russia will have a national 5G network, using Chinese or Western equipment, as the military has so far declined to free up the necessary radio frequencies.

“The situation there is a bit complicated,” a deputy prime minister, Maksim Akimov, said at a meeting with Mr. Putin in April. “We’d like to ask you for relevant orders,” to the military, so Russia can keep up with the new (5G) cellphone technology.

MTS’ pending 5G Huawei deal comes as Chinese authorities moved this week to license its first array of 5G wireless service providers.   China approved its first batch of 5G licensing for commercial use, unveiling, in the words of state media, “a new era for the telecom industry.” Huawei will be deeply involved in that effort, adding to the more than 45 commercial 5G contracts the firm has signed in 30 countries around the world.

The US has also been urging allies to restrict or ban the use of Huawei equipment in their 5G networks, warning that Beijing could use the sensitive data infrastructure for spying. Huawei has repeatedly denied that any of its products pose a national security risk.
While some US cities have begun rolling out 5G technologies, analysts have warned the Huawei ban risks slowing down countrywide adoption, and could see it lag behind China. Now even Russia, not usually thought of as a tech leader, may be poised to pull ahead.
Outside of the US, whether to buy from Huawei or not is increasingly becoming a political litmus test, one that threatens to exacerbate the bifurcation of the global internet into separate spheres, and hasten the demise of the open, truly worldwide web as we know it.
Those that choose to avoid Huawei also risk falling behind as the world moves towards the next stage of internet and communications technology.

“Having mutually exclusive technological spheres doesn’t simply mean supply chains will mirror each other on different continents,” technology analyst Tim Culpan wrote recently. “Rather, for countries around the world, it means that every business and investment decision becomes a political one.”
…………………………………………………………………………………………………………………………………………………………………………………………………………….
“If the lights go out in the West, the East will still shine,” Huawei founder Ren Zhengfei said in February. “And if the North goes dark, there is still the South. America doesn’t represent the world. America only represents a portion of the world.”  Ren  previously suggested there were plenty of business opportunities outside the U.S.
Of course that is true and is how Huawei became the top telecom equipment maker without selling anything in the U.S. other than to rural telcos (as noted in this IEEE Techblog post).

On June 6th, China’s Commerce Ministry said it planned to draw up its own list of “unreliable” foreign companies to retaliate against the U.S. government ban of Huawei.
The MTS-Huawei deal came as Russia is courting Chinese investment at a business conference this week, the St. Petersburg International Economic Forum. Russian media reported about 1,000 Chinese businessmen attended, while the United States ambassador, Jon M. Huntsman Jr., boycotted the conference over the arrest this year of an American investor, Michael Calvey.
………………………………………………………………………………………………….
Ron Amadeo wrote on ars Technica:

According to a report from The Financial Times, Google’s recent discussions with the US government actually argue that the Huawei ban is bad for national security. Google is reportedly asking for an exemption from the export ban.
The argument, reportedly, is that Huawei is currently dependent on Google for its Android smartphone software, and that dependence is a good thing for the US. The Financial Times quotes “one person with knowledge of the conversations” as saying, “Google has been arguing that by stopping it from dealing with Huawei, the US risks creating two kinds of Android operating system: the genuine version and a hybrid one. The hybrid one is likely to have more bugs in it than the Google one, and so could put Huawei phones more at risk of being hacked, not least by China.”
Banning Huawei from dealing with U.S. companies is definitely a double-edged sword. Huawei would have a tough time building smartphones or an app ecosystem without the help of U.S.-originated technology and app developers, but US hardware and software companies would lose access to the second largest smartphone maker in the world.

Facebook will no longer allow its apps to be pre-installed on Huawei phones as the Chinese tech giant faces the ongoing fallout of a blacklisting of its services in the U.S.  That means that people who already own Huawei phones with apps such as Facebook, WhatsApp and Instagram will not be impacted, Facebook confirmed Friday that new phones from the tech company will not come with the applications.  However, Huawei devices (smartphones and tablets) that are already in the hands of consumers will still be able to run the apps and receive regular software updates, Facebook told Reuters.

Huawei, the second biggest smartphone brand in the world, has denied it cooperates with the Communist Party in Beijing. In retaliation to the administration’s blacklisting, China announced last month it would establish an “unreliable entity list” of foreign companies and individuals that “seriously damage” Chinese enterprises.
……………………………………………………………………………………………………………………………………………………………………………………………………………
Conclusions:
Chinese President Xi Jinping and his Russian counterpart Vladimir Putin have vowed to bolster Sino-Russian ties and oppose unilateralism, as the two nations seek to counterbalance the United States’ power on the international stage.  According to China’s state broadcaster CCTV, Xi told Putin that the frequent high-level exchanges between the two countries reflected the “uniqueness and distinction” of their relationship.
“Both nations have to oppose unilateralism and trade protectionism, and build a new type of international relations and shared human destiny,” Xi said.  Putin acknowledged Xi’s commitment to boosting ties between Moscow and Beijing, which he said were based on trust in areas ranging from politics to defense.

“We have a relationship of trust in the sphere of politics, security and defense,” he said. “We know that you [Xi] personally pay great attention to the development of Russian-Chinese relations.”

The new era of closer Sino-Russian relations is born out of concerns that the US-China trade war – sparked by US President Donald Trump’s “America first” foreign policy and which has cost Beijing billions of dollars in export tariffs – could escalate into a cold war between the two countries.  As China and Russia get ever closer and agree to boost ties in the face of U.S. pressure, we are seeing the beginnings of a new 5G iron curtain and tech cold war.

8 thoughts on “Is a new 5G Iron Curtain emerging:  Russia and China Tech Cold War vs the U.S.?”