Plans to upgrade the wireless service near Mr Nelson’s farm halted abruptly this month when US President Donald Trump issued an executive order that banned the purchase of equipment from companies “posing a national security threat.”  That order was meant to bar network equipment from Huawei, the Chinese telecommunications giant, which is a major supplier of equipment to rural wireless companies.

The CEO of the wireless provider in Mr Nelson’s area said that without access to inexpensive Huawei products, his company could not afford to build a planned tower that would serve Mr Nelson’s farm.  Nowhere will the changes be felt more acutely than in rural America, where wireless service is spotty despite years-long government efforts to improve coverage. They also add to the economic uncertainty created by the White House’s trade war with China. Farmers are fearful of an extended hit to their exports.

Huawei is essential for many wireless carriers that serve sprawling, sparsely populated regions because its gear for transmitting cell signals often costs far less than other options.

Mr Trump’s ban is forcing carriers such as Nemont, which serves Opheim, to scrap expansion plans. In addition, some of the companies already using Huawei equipment fear that they will no longer receive government subsidies meant to help get service to remote areas.

U.S. intelligence officials have accused Huawei of being an extension of the Chinese government, and said that its equipment could be vulnerable to espionage and hacking.  President Trump also appears to be using Huawei as a bargaining chip in his escalating trade battle with China. “Huawei is something that is very dangerous,” he said last Thursday. “It’s possible that Huawei would be included in some kind of trade deal.”

Huawei has denied that it is a security risk, saying that it is an independent business that does not act on behalf of the Chinese government. It said that 500 carriers in more than 170 nations use its technology.  “Restricting Huawei from doing business in the US will not make the US more secure or stronger,” Huawei said in a statement. “Instead, this will only serve to limit the US to inferior yet more expensive alternatives.”

Much of Mr Trump’s focus has been on the next generation of wireless technology, known as 5G. But Huawei already provides equipment to about a quarter of the country’s smallest wireless carriers. The Rural Wireless Association, a trade group that represents 55 small carriers, estimated that it would cost its members US$800 million to US$1 billion to replace equipment from Huawei and ZTE, China’s other maker of networking gear.

Nemont, based near Opheim, is one of those companies. Its footprint is 36,260 sq km, bigger than Maryland, and requires huge amounts of wires, towers and other costly infrastructure. But the company has only 11,000 paying customers.  Nemont first reached out to Huawei nine years ago, when its members decided to upgrade their cellular network. With subsidies from the federal government, Nemont was prepared to spend about US$4 million on networking equipment such as routers and other gear to put on dozens of cell towers across the region.

Even at the time, officials in the Obama administration voiced concerns about Chinese equipment makers and their ability to break into US networks to steal intellectual property or hack into corporate or government networks. Defense Department officials and lawmakers said that they were concerned that the Chinese government and military could use the equipment to intercept American communications.

The officials were vague about their concerns over Huawei, then a little-known firm. But Mike Kilgore, the chief executive of Nemont, said that he had outlined Nemont’s plans to buy Huawei equipment in a letter to Senator Jon Tester, and asked whether Mr Tester had security concerns.  Mr Kilgore said that he was ready to go another route if Huawei’s equipment would put customers at risk. “I was begging for them to say, ‘No, don’t buy it,'” he said.

Mr Tester’s office called him and said that it did not see any major concerns with picking Huawei, Mr Kilgore said. A spokesman for Mr Tester said that an aide had told Mr Kilgore to contact the Federal Bureau of Investigation (FBI) and other intelligence officials for advice.  After the call, Mr Kilgore chose Huawei, which offered to customise its equipment and charge 20-30 per cent less than competitors. 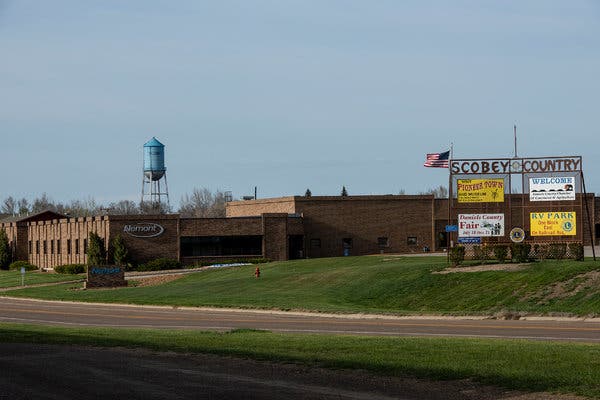 Nemont, a wireless provider that serves an area larger than Maryland, scrapped some expansion plans after a recent executive order by President Trump.  Photo Credit: Lynn Donaldson for The New York Times

Nemont has since expanded its high-speed wireless network using almost all Huawei equipment. Mr Kilgore even visited Huawei’s headquarters in Shenzhen, China. He is the president of the Rural Wireless Association, the trade group. Huawei has a representative on the group’s board without voting rights, one of two board members who do not represent a wireless carrier.

“The other vendors hardly gave us the time of day, and now they have been acquired or are out of business,” Mr Kilgore said. “We took a gamble, but we clearly made the right bet.”

The technological upgrade changed lives. Kevin Rasmussen was recently in the cab of his tractor using an iPad connected to high-speed Internet beaming from a nearby cell tower. The connection worked with software on the iPad to help direct where the tractor poked holes in the soil and dropped seeds and fertilizer.

“I can sit up here in my tractor and do my banking, monitor six weather apps and read up on things like trade and Huawei, all on my phone,” Mr Rasmussen said. “Rural America needs this so badly.”

Many companies that extend wireless broadband to rural areas, like Nemont, depend on subsidies from the Federal Communications Commission (FCC). Ajit Pai, the FCC’s chairman, has proposed cutting off that money to carriers using equipment from Huawei or ZTE.

“We believe that it is important that networks are secure not just in urban areas, but in rural areas as well,” the agency said in a statement. “There are currently many rural broadband providers that use equipment that does not pose a national security risk.”

Mr Kilgore estimated that it would cost US$50 million to replace his Huawei equipment. If that is the only option, he said, he might have to shut down the company, leaving his customers without wireless service.  Mr Rasmussen said that would be a big blow to his farming operation. “We’re getting squeezed on all sides,” he said. “The tariffs and trade affect our prices, and now this could affect our ability to farm.