India’s telecom minister has met with the major mobile network operators and invited them to start testing their 5G services. The government also confirmed that Chinese network infrastructure equipment vendors Huawei and ZTE would be allowed to participate in the trials.

The meeting was chaired by telecom secretary Anshu Prakash and was attended by senior representatives of Bharti Airtel, Vodafone Idea, Reliance Jio and all equipment vendors, including Huawei, reports Live Mint.  Indian television channel CNBC-TV18 reported the news first, citing a senior official. The trials will be held in January, according to the official, the channel reported.

India’s department of telecom expects to allocate spectrum soon (we’ve heard that before?) for trials, which should begin in Q1-2020, ahead of plans for a spectrum auction no later than April 2020.

India Telecom Minister Ravi Shankar Prasad said earlier that 5G spectrum for trials would be available to all wireless network equipment (base station) vendors.  In particular, he told reporters in India earlier this week:

“5G trials will be done with all vendors and operators.  We have taken an in-principle decision to give 5G spectrum for trials.” On being asked specifically about Huawei, Prasad said that at this stage, all vendors are invited. 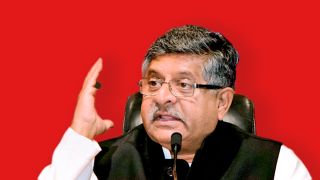 The Indian government believes the trials, which were originally supposed to be held in 2019, will help in the development of the country’s 5G ecosystem. The Indian telcos will be conducting 5G tests with different vendors: Bharti Airtel plans to conduct trials with Nokia, Huawei and Ericsson, while Vodafone Idea wants to partner with Ericsson and Huawei. Reliance Jio, which currently works primarily with Samsung, has applied to conduct 5G tests with the South Korean vendor. 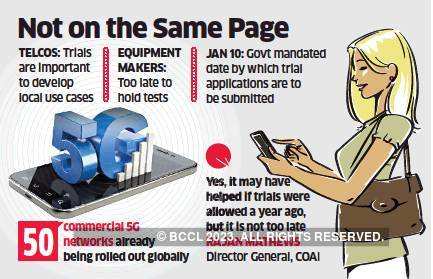 A senior executive at one vendor said the trials should have begun a year ago and now that global testing is over, it does not make sense to start from scratch in India, especially with the auction of 5G airwaves slated for March-April.

India’s telcos have been asking for clarity from the government regarding the participation of both Chinese vendors in 5G activities. Initially only a handful of vendors, including Cisco, Ericsson, NEC, Nokia and Samsung, received invitations to participate in the 5G trials.

The decision was welcomed by Huawei India in a statement, as well as comments from the Chinese ambassador in India on Twitter. Huawei is already active in the country, where it has deployed 4G networks for Bharti Airtel and Vodafone Idea.

The inclusion in India’s 5G trials is of particular significance for Huawei, which faces trading restrictions in several countries, including Australia, New Zealand and the US, because of security concerns. The US has been lobbying the Indian government to exclude Huawei from the 5G market but, equally, China has been lobbying for Huawei and ZTE to be given equal opportunities in India’s 5G market.

The efforts of the US authorities to restrict Huawei’s business had an impact on the vendor’s sales in 2019, though with expected full-year revenues of almost $122 billion it is still by far the largest supplier of telecoms infrastructure globally and the number two player in the smartphone market.

During the past few years, Chinese vendors have provided crucial support to India’s service providers as they attempted to manage their costs and keep tariffs under control. Chinese network equipment is cheaper than the equivalent offerings from Western rivals, enabling traditional telcos to offer services in a market with one of the lowest average revenue per user (ARPU) figures in the world.

The exclusion of Huawei and ZTE from forthcoming 5G deals would almost certainly result in an increase in capital expenditure by India’s telcos: Sunil Bharti Mittal, the chairman of Bharti Enterprises, the parent company of Airtel, spoke out in support of Huawei during a recent event organized by World Economic Forum, stating that Huawei’s equipment was superior to that of its main European rivals, Ericsson and Nokia.

“Glad to know all players got equal chance to participate in 5G trial in India. A welcome move conducive to initiatives like Digital India,” said Chinese Ambassador Sun Weidong in a social media message.