Europe has reached 200 million (M) homes that are now able to access FTTH/B services.  That number is forecast to grow over 50 percent in the next five years, to more than 300 million homes passed, according to the latest research commissioned by the FTTH Council Europe. The new figures were released at its annual conference in Vienna, along with fiber subscriber numbers and research intro rural coverage.

The latest research by Idate for the council shows nearly 198.4 million homes were passed by FTTH or FTTB as of September 2021, up from 176.3 million a year earlier. The annual expansion was led by France (+4.3 M), the UK (+3.4 M), Germany (+2.4 M) and Italy (+1.5 M), all countries with a strong copper network footprint that previously held back fiber optic deployments.

The figures cover 39 countries across Europe and equal 57 percent of total households in the area, up by 4.5 percent points from a year earlier. In the 27 EU countries plus the UK, the coverage reached 48.5 percent of homes, up by 4.6 percent over the 12 months.

The number of subscribers on the fiber networks reached 96 million. The fastest growing markets in terms of new subscribers were France (+3.8 M), Spain (+1.2 M), Romania (+1 M), Italy (+820 K) and the UK (+765K). In total, 48.5 percent of households able to receive fibre services actually subscribed to the services, an increase of 3.6 percent in the network penetration rate. In the EU plus UK, take-up was at 52.4 percent, up 5.6 percent year-on-year. Alternative operators still account for the majority of the FTTH/N coverage (57%), with incumbent operators taking 39 percent and 4 percent built by municipalities and utilities. Overall, there is a strong acceleration in fiber deployment, with a firm commitment to cover both urban and rural areas, the researchers said.

Idate also updated its five-year forecast for the FTTH/B market. It expects 199 million homes passed in 2027 in the EU+UK region and 309 million in the wider EU 39 region. Over the same period, the number of subscribers is expected to reach respectively 124 million and 190 million, equal to network penetration of over 62 percent in the EU and UK and more than 61 percent in the EU 39. 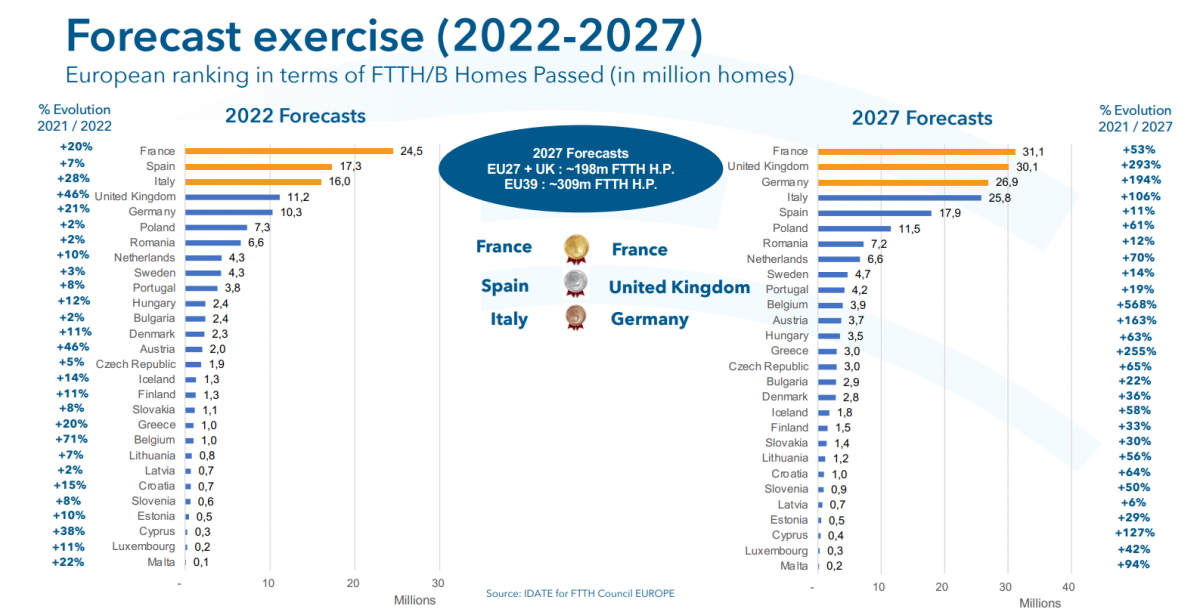 Further research shows that only 30 percent of rural inhabitants could enjoy fibre network access as of September 2021. Rural FTTH/B coverage is highest in Denmark (76%), Latvia (74%), Spain (66%), Romania (62%) and Luxembourg (55%). The report emphasized that immediate action should be oriented towards the rural regions, with increased public support through subsidies and partnerships to cover every European premise with high-speed broadband.

At the conference, the FTTH Council also announced several awards for contributions to the industry’s progress. UK wholesale operator CityFibre received the operator award; Jacek Wisniewski, CEO of Polish operator Nexera received the individual award; and Eurofiber CEO Alex Goldblum was winner of the Charles Kao award, named after the eponymous scientist who won a Nobel prize for physics for his research into fiber-optic communications.