The metaverse could be tech’s next trillion-dollar opportunity, according to Mark Zuckerberg of Facebook/Meta Platforms.  The business world is obsessed with “the metaverse”: the concept of shared worlds driven by virtual products and digital experiences that are highly immersive and interactive.

We already have virtual worlds featuring live concerts and online games where players spend hundreds of hours — but metaverse enthusiasts see a future where entire societies thrive in an online realm inhabited by avatars of real people.

While the space is still in early days, the longer-term implications may not be trivial. Some users — especially younger ones — may eventually earn, spend, and invest most of their money in digital worlds. The metaverse could represent a $1T market by the end of the decade, according to CB Insights’ Industry Analyst Consensus.

The metaverse is a vision, not a specific technology. For enterprises, this ambiguity can make it challenging to figure out how to tap into the emerging trends the metaverse represents. Below are the companies making it a reality: 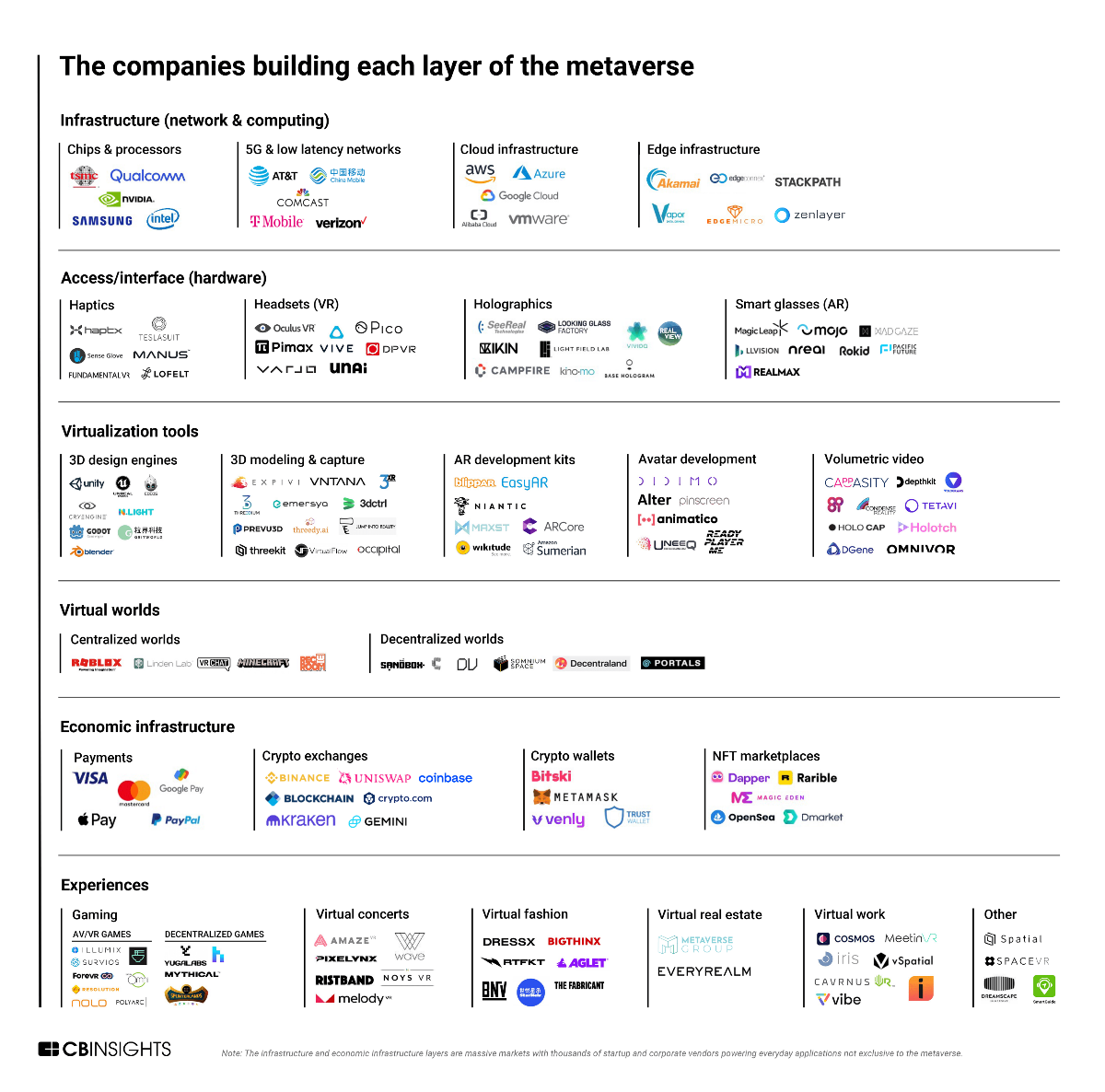 The metaverse requires compute and processing infrastructure that can support both big data flows and low latency. Tech emerging within categories such as chips & processors, 5G, cloud infrastructure, and edge infrastructure, will prove vital to creating a seamless, lag-free experience in the metaverse.

Chips & processors: Advancements in this space will support the intense computing and processing requirements of metaverse applications.

New metaverse-focused hardware — e.g., virtual reality (VR) headsets and augmented reality (AR) glasses — is being designed to support intense workloads related to high-fidelity graphics and artificial intelligence (AI) on smaller, lightweight devices. Qualcomm chips stand out in this arena — the tech giant claims its Snapdragon chips have been used in over 50 AR/VR devices, including popular VR headsets like Meta’s Oculus and HTC Vive. Qualcomm also recently announced the launch of its $100M Snapdragon Metaverse Fund, which will invest in the extended reality (XR) space.

Additionally, Intel claims that the metaverse will necessitate a 1000x increase in computational efficiency, including advancements in 5G and hybrid edge-cloud infrastructures. That said, new chips will also be required to power these critical low latency computing networks. In February 2022, the semiconductor company released details on new chips that will support high-power data centers and 5G networks.

As of 2022, each of the leading telecom companies in the US offers a 5G network. Some are experimenting with 5G in gaming and AR/VR. For example, in April 2021, Verizon partnered with VR startup Dreamscape Immersive to build immersive learning and training applications on Verizon’s 5G network. Three months later, AT&T partnered with Meta’s Reality Labs to show how 5G could be utilized to generate more seamless augmented reality experiences.

In 2018, Epic Games‘ Fortnite generated 5 petabytes of data per month (that’s equivalent to 2.5T pages of standard text). In order to store and make sense of this data, Fortnite runs almost entirely on Amazon Web Services (AWS), where it uses cloud computing to aggregate and analyze information from its otherwise unwieldy data stream.

Advancements in this space will also help people access the metaverse on devices that lack sufficient processing power for applications like high-res graphics and AI — cloud computing allows experiences to be processed on a remote server and then streamed to a device, such as a PC, VR headset, or phone. While this back-and-forth communication with an external server can lag, related developments in edge computing and 5G will help to reduce latency.

Edge infrastructure: Edge computing will be used for metaverse applications that depend on real-time responses, such as AR/VR and gaming.

Edge computing enables data from low-power devices to be processed closer to where it is created — i.e., at “the edge.” This can be particularly helpful when it comes to situations that require information to be processed in real time — such as utilizing hand-tracking sensors on a VR headset or processing commands during competitive gaming. In fact, edge infrastructure companies like Stackpath and Zenlayer list gaming and virtual reality among their main focus areas.

Edge processing is heavily interrelated with cloud computing. While cloud infrastructure handles workloads that do not require minimal latency, such as loading out-of-sight objects in a game, edge infrastructure handles inputs that need a very quick response, like player movements. Some companies develop blended offerings. For example, Akamai offers edge-cloud hybrid services to a number of high-profile gaming companies, including Roblox and unicorn Riot Games.

This layer includes hardware devices that allow people to experience the metaverse. While this category encompasses connected devices like mobile phones, PCs, and gaming consoles, it is predominantly centered around emerging technologies designed to enhance immersion in a virtual setting.

Haptics: Haptic startups are developing technology to bring the sense of touch into virtual worlds.

Some startups, such as HaptX and Sense Glove, are developing gloves that grant virtual objects tangibility. Bridging micro-vibrations, pneumatic systems for force resistance, and motion tracking, this technology can give the impression that digital objects have texture, stiffness, and weight.

In the future, haptic technology may extend well beyond a person’s hands. Scotland-based Teslasuit is developing complete bodysuits to provide whole-body haptic feedback and climate control in virtual environments.

Headsets (VR): These companies are developing VR goggles — currently considered the main entry point to metaverse applications. These devices provide visual and audio content to users to immerse them in a digital setting.

One of the most popular VR headsets is Meta’s Oculus, which saw a surge in consumer interest during the 2021 holiday season.

Startups have followed suit. Varjo, for example, uses lidar and computer vision to bring depth perception, eye-tracking, and hand-tracking to its VR headsets.

Holographics: These companies use light diffraction technology to project 3D objects into physical spaces. These holograms, like augmented reality, bring digital experiences into the physical world.

While holographic technology is still in its early stages, it has the potential to be applied to a wide range of use cases, from hologram-led set design and performances to product design and medicine. Base Hologram is using the tech to bring popular artists like Whitney Houston and Buddy Holly back to the stage, while Israel-based RealView Imaging renders holograms of a patient’s internal organs to help with surgical planning.

The technology has a long way to go before it sees widespread success, but companies currently working in the space have given us an idea of what to expect down the road.

While not all applications of AR glasses are directly related to the metaverse — for example, AR tools designed exclusively to help engineers fix refrigerators do not revolve around shared experiences — the companies featured in this category are setting the foundation for a bridge between physical and virtual worlds.

As AR gains popularity, particularly for social purposes, the tech will evolve into a tool that more effectively blends virtual and real-world elements — such as interacting with someone’s metaverse avatar at an event — further blurring the line between consumers’ online and offline identities.

Currently, China-based Nreal is developing AR glasses equipped with web browsing and video streaming capabilities for the everyday consumer. Others, like Magic Leap, are developing AR headsets for enterprise use cases.