Verizon, Sprint and T-Mobile plan to launch their own versions of “5G” networks within the next year or two, which could open up further advancements and support for smart cities. The technology could transform cities by reducing power usage, improving broadband services in public areas and could improve traffic safety through deployments in smart traffic lights and autonomous vehicles. 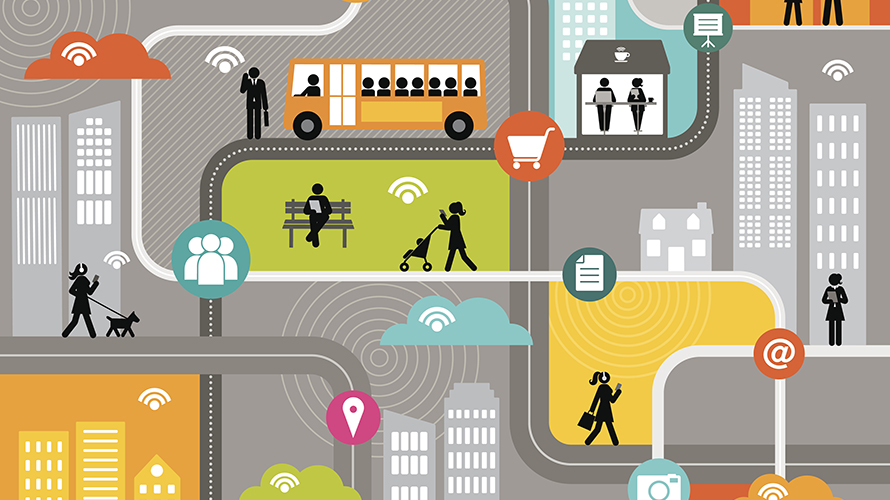 The infrastructure for 5G is still only beginning—with wider availability not expected until at least 2020—but cities like New York, Las Vegas, Sacramento, Calif., and Atlanta will soon get a chance to preview the promise of 5G this year when Verizon, T-Mobile and Sprint begin rolling out their faster networks in select areas. Using 5G, a city can sense “all sorts of variables across its many areas of interest, be it parking meters, traffic flow, where people are, security issues,” said Ron Marquardt, vp of technology at Sprint.

Mark Hung, an analyst at Gartner, pointed out that while 3G brought web browsing and data communication to the smartphone, 4G greatly enhanced it. And even though towers today can support hundreds or thousands of devices, 5G could help scale the Internet of Things from “hundreds and thousands to hundreds of thousands.”

Here are some of the ways 5G might transform cities over the next few years:

Telecoms will increasingly weave their way into the infrastructure through 5G. By gathering data from buildings, 5G can help cities understand patterns in electricity usage, leading to lower power consumption across the grid. Those savings could vary greatly. According to a 2017 report by Accenture, smart technology and 5G in a small city with a population of around 30,000 could have a $10 million impact on the power grid and transportation systems. A slightly larger city of 118,000 could see $70 million. Meanwhile, a major metro area—say, Chicago—could see an economic impact of $5 billion.

Private-public partnerships are still in the early stages of being developed. For example, Nokia last month announced a partnership with the Port of Hamburg in Germany and Deutsche Telekom to monitor real-time data to measure water gates, environmental metrics or construction sites.

“I think last year the buzzword was fourth industrial revolution, but for me it still rings true,” Jane Rygaard, head of 5G marketing at Nokia, said about the endless possibilities of a 5G network.

As infrastructure becomes digitized through 5G, some agencies are already investing in understanding a 5G-infused infrastructure to help clients adapt to smarter cities. R/GA’s new venture studio with Macquarie Capital will include tackling how 5G will be tied to emerging technologies like AI and blockchain. R/GA chief technology officer Nick Coronges said the connectivity of 5G goes hand in hand with emerging technologies such as AI and blockchain.

Verizon, which will test 5G in nearly a dozen cities in 2018, is making its first broadband debut in Sacramento with a 5G wireless network later this year. As part of the rollout, Verizon is placing 5G in stadiums. Lani Ingram, Verizon’s vp for smart communities, sports and IoT platforms, said 5G could also be put to good use in airports, convention centers and other venues.

“The amount of usage of data during sporting events and concerts is only growing,” she said. “We see that every year during the Super Bowl, for example.”

Many tout the need for 5G to power self-driving cars. For an autonomous vehicle to smoothly travel through a city, it will need to have low latency that allows it to continuously “see” its surroundings. 5G will allow for smart traffic lights, which connect with cars on the road to improve traffic flow. Carnegie Mellon University and Pittsburgh tested the use of smart traffic lights. The result? A 40 percent reduction in vehicle wait time, a 26 percent faster commute and a 21 percent decrease in vehicle emissions.

A 5G network will also make the roads safer. For example, as a car enters an intersection, a smart traffic light will notify it that a pedestrian has just hit the “walk” button, which will provide drivers more warning. Ambulances will be able to change traffic lights faster to accommodate their route and clear intersections.

“We see more and more of our customers linking smart city and safe city,” Rygaard said, adding that 5G isn’t just for consumers. It will improve their daily lives—whether that’s through safety, energy or countless other ways.

A Look at the Future of 5G-Powered Smart Cities