Wireless telcos are counting on 5G’s capabilities to broaden their customer base beyond phones to new machines like driverless cars and factory robots. AT&T executives are so enticed by the promise of mixed-reality goggles, which superimpose images in users’ field of vision, that they invested in visor maker Magic Leap to help develop a market for the devices (see below for details).

AT&T is in a race to launch 5G services faster than its rivals, though each is taking a different path to get there. Verizon Communications tried to get the jump on its competition with its own pre-5G (fixed wireless broadband) standard.  AT&T directed its research toward internationally recognized specifications (i.e. 3GPP which is not a standards organization)—hoping that doing so will make its service more adaptable as the technology matures.

The chief executive of AT&T’s communications division, John Donovan, spoke with The Wall Street Journal about AT&T’s plans for 5G, among other things. Here are edited excerpts of the conversation.

WSJ: There’s been a lot of talk about 5G technology. When it comes, what will it look like?

MR. DONOVAN: You’ll start to see handsets rolling out as early as the first quarter of 2019, but much more probably and in more volume when you start to look at the back half of ’19. Things will be compatible with not only 5G but also all of the prior generations. With nonstandards technology, [that kind of backward compatibility] is not typically the case. That’s why we didn’t waste too much time on the nonstandard version like some of our competitors.

WSJ: It sounds like there’s a bit of a chicken-and-egg problem. If you don’t know what consumers are going to want 5G service for, how do you know where to build the network first?

MR. DONOVAN: We think that the 5G network is going to be most impactful for most consumers and businesses based on specific use cases. One would be retail. With this 5G network, you’re going to be able to get centimeter-level accuracy on location. These potential use cases include recognizing consumers entering the store, alerting the concierge or manager to provide a personalized experience [and showing] product features on adjacent digital signage or scanning and displaying product features within the store app on the consumer’s mobile device. Those are the kinds of things we think are going to drive this, as opposed to saying, “Hey, I’ve got a phone and it’s faster, look at mine, it’s got this 5G tag up in the corner.” 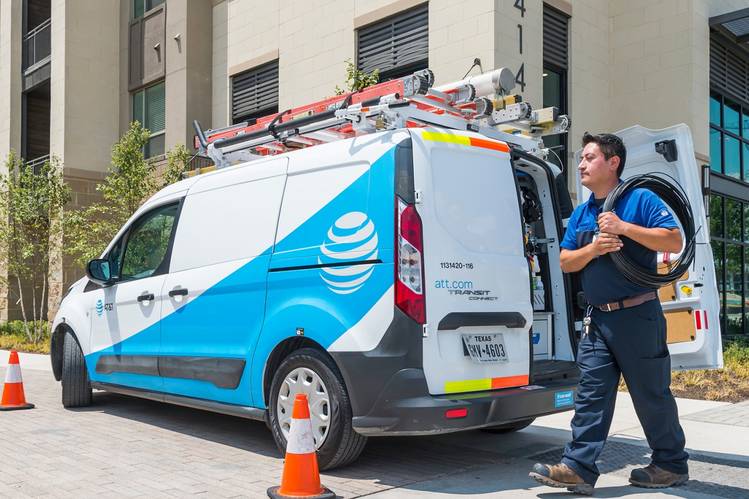 Milestones in the evolution and rollout of 5G technology

We’ve made two announcements so far. One is in robotic manufacturing in Austin, Texas, with Samsung. And we have an exclusive for the Magic Leap mixed-reality goggles.

The speed of 5G means the next generation of goggles will be smaller, lighter and cheaper. When we did the announcement with Magic Leap, one of the things we announced is that DirecTV Now will be one of the apps available on the goggles. So, you put the goggles on and you can project four televisions onto the wall.

It’s mind-blowing to think about creating an 80-inch television from a set of goggles.

WSJ: When 5G comes to my cellphone, am I going to pay more for a plan?

MR. DONOVAN: That’s to be determined. I think that’s something that collectively the industry’s going to try to innovate around. When we went from megabits and text-message plans to unlimited in the 4G network, there wasn’t a lot of incremental revenue. But 4G dropped our costs dramatically, so it improved our margins.

With 5G, you can never call these things until you get into the marketplace. Most would say now that it’s going to carry a premium because it’s so superior in some of the things it can do. But that premium may be that you have three new devices in your home that have small connection fees, and not necessarily that you have an iPhone in your hand and the plan it’s on costs more.

WSJ: Looking back on past generations of wireless, as networks mature, it gets harder to tell the networks apart, at least in the consumer’s mind. How do you try to distinguish yourself from the other guys?

MR. DONOVAN: Generally, we’ve hit a point with networks that there’s “good enough.” The analogy I use is oxygen. You’ll notice if it’s not there. But if it is there, in its highest state it’s invisible. How do you make it visible? Your people. I love the idea when it’s about the people in the stores, the call centers, your sales rep. We’re more likely to win in a world differentiated around people than marginally differentiated by machines.

WSJ: Should the number of stores be growing? Do you think we need more places to buy phones?

MR. DONOVAN: Yes, but I don’t want to build a store that you have to go to. I want to go to where you already are. So, if you look at our retail growth this year, it’ll be in kiosks, pop-up stores and trucks. If you’re in a brand new [apartment] and you want to deal with fiber and a family plan and television, wouldn’t it be great if you had a pop-up store that’s in the lobby right near the leasing office, you can get all of that stuff done, and a year later the store is gone because the building’s leased up?

If you take the wireless business, even up to three to five years ago, you could run a promotion on television and generate volume by people going to your store. Today, the customer’s perception is that’s an industry offer. They would never say, “That’s a T-Mobile offer, I’m going to go to the store and get it done.” They go from there to Google and they start searching. Or the other thing is they go entirely in social. So their friends say, “You know what, you need to switch to AT&T and here’s why.”

Those two things didn’t even exist five years ago from a standpoint of how we marketed.

4 thoughts on “WSJ Interview with John Donovan: Inside AT&T’s Plan for 5G Technology”