In a new complimentary white paper, “Substance behind the Hype: 5G Smartphones Primed and Ready for Fast Rollout,”  IHS Markit explores how the global 5G transition is poised to take place at a faster pace than for any previous wireless generation transition.   “It is easy to paint the current momentum behind 5G as the usual pre-launch hype drummed up by vested stakeholders,” said Wayne Lam, principle analyst for IHS Markit and lead author of the white paper. “However, the mobile industry is fundamentally better prepared and more aligned with a common standard than at any previous technology transition.”

Industry uncertainly adds friction to development and discourages firms from making big bets when the outcome is less than certain. While past wireless technology upgrades had competing standards vying for industry attention, there is no doubt about the air interface standard that will be used for 5G. “The 5G electronic ecosystem is significantly more mature, at this point, compared to the same time during the LTE transition,” Lam said. “Key 5G chipsets have been tested, proven and designed into devices, and the industry is now poised to deliver their first 5G smartphone in early 2019.”

“As telecom companies embark on the start of another wireless generation transition, they are doing so with a robust and coordinated ecosystem of carriers, handset makers and component suppliers,” Lam said. “By and large, the industry is finding itself with an unprecedented opportunity to execute a wireless transition in the best position possible.” 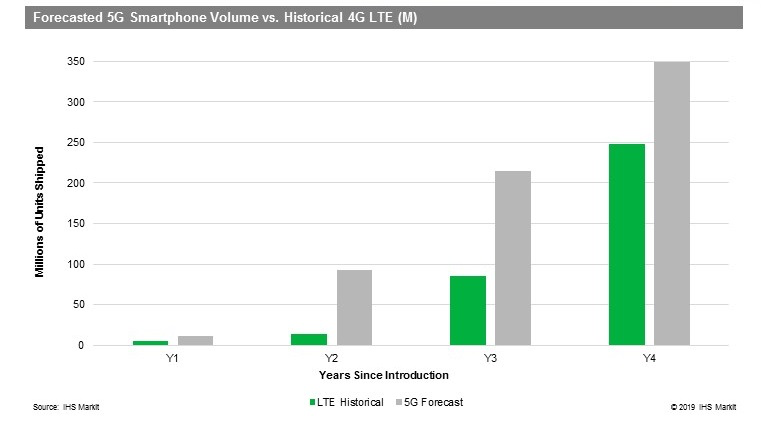 To download the complimentary “Substance behind the Hype: 5G Smartphones Primed and Ready for Fast Rollout” white paper from IHS Markit, visit https://cdn.ihs.com/www/pdf/0119/IHSMarkit-Whitepaper_5G-Smartphone_Jan2019.pdf.

Following is an overview of the smartphone market leaders in 2018, based on unit shipments:

Samsung Electronics maintained its shipment-volume lead, shipping 70.2 million units in Q4 2018. Samsung’s negative growth rate in 2018 continued, as shipments declined 5.5 percent compared to the same quarter of 2017. As a result, its market share fell to 19.2 percent in Q4 2018, which is flat compared to the previous year. Severe competition from Chinese rivals in many regions continued to impact Samsung’s business – and has led to Samsung changing its strategy for how new technologies are deployed in the company’s product range. For example, the first triple-camera Samsung device was a Galaxy A phone and, instead of a Galaxy S device, Samsung released the world’s first quad-camera smartphone – the Galaxy A9 — last year.

Huawei shipped 60.5 million units in Q4 2018, rising 47.7 percent, year over year. The company continued its double-digit y/y growth for the fourth consecutive quarter, growing in most of regions, except North America where Huawei has little exposure. Fast growing markets for Huawei include Europe, Middle East and Africa. In 2018, Huawei was able to exceed Apple in unit-based shipments for three consecutive quarters, propelling the Chinese brand to second-ranked position in the market, unseating Apple from its perch. However, the network infrastructure side of Huawei has faced increased scrutiny from the United States and other governments around the world, due to potential security concerns in to roll out of 5G networks.

Apple shipped 64.3 million units in Q4 2018, down 16.9 percent from 77.3 million units in Q4 2017. The company’s performance faced significant challenges in China and in the overall global smartphone market in Q4 2018. Furthermore, Apple’s super-premium handset pricing seems to have stunted its unit growth potential in the quarter. Importantly, there is no quick fix for Apple to change fortunes in China or India. In China, local competition is fierce; while in India, Apple’s products are ill-equipped to fit into the country’s price-cautious market.

Xiaomi, Oppo and Vivo were adversely affected by the continued negative growth of the smartphone market in China. On the other hand, Huawei strengthened its market leadership in China. Tension between the US and China stimulated a feeling of patriotism in China, leading smartphone users to choose Huawei over other brands. Moreover, Huawei boasts significant international business – which other brands are still working to establish – enabling the company to achieve tremendous success in the fourth quarter.

The combined market concentration on the top six companies continued to intensify in Q4 2018, accounting for 75 percent of global smartphone shipments. Most of the rest brands saw their shipments and market shares fall in the quarter.

Meanwhile, Nokia increased its shipments to 15 million units in 2018, up from 5 million units in the previous year. Finland-based HMD Global is operating its Nokia-branded smartphone business, by focusing on mid-range and low-end smartphones in Europe, Asia and Africa. The company will soon expand into North America.

IHS Markit (Nasdaq: INFO) is a world leader in critical information, analytics and solutions for the major industries and markets that drive economies worldwide. The company delivers next-generation information, analytics and solutions to customers in business, finance and government, improving their operational efficiency and providing deep insights that lead to well-informed, confident decisions. IHS Markit has more than 50,000 business and government customers, including 80 percent of the Fortune Global 500 and the world’s leading financial institutions. Headquartered in London, IHS Markit is committed to sustainable, profitable growth.

Avi Greengart, a mobile device analyst with GlobalData, said a big challenge with every new phone model release for Samsung and other vendors is that as phones have matured, users are holding onto their phones longer.

“As much as Samsung needs to compete with Apple, it needs to compete with the phone consumers already have – the S10 needs to be a phone that entices existing Android phone owners to upgrade,” Greengart told eWEEK. “We know what phones are and what they do – no single new feature is likely to be groundbreaking. However, design is definitely an area of focus; Samsung was actually the first vendor with an edge-to-edge display, but now that’s not enough.”

The new phones will almost certainly include 5G capabilities for each of the major mobile carriers’ networks as they come online, but more will be needed to make a sales impact, he said.

“There is a tricky balance that Samsung must hit – it needs radical designs and bleeding edge technologies like folding displays and 5G that push the envelope for early adopters, but it also must make more traditional 4G phones exciting enough to entice mainstream consumers to upgrade as well,” Greengart said. “It’s not enough to just cram massive amounts of technology into the phone for the wealthiest consumers. In the U.S., the competition really is focused around Apple and Samsung, but in Europe and Asia, Chinese brands like Honor and Xiaomi are attacking Samsung with premium phones at lower price points.”

Charles King, principal analyst with Pund-IT, agreed.  “At this point, Samsung is one of the two to three phone makers that can and do fight Apple to a draw,” King told eWEEK. “With phones like Samsung’s [current] Galaxy S9, it really comes down to the buyer’s operating system and applications preferences. That’s a significant contributor to Apple’s overall slowdown in iPhone sales growth over the last few months.”

For buyers, solid and noticeable improvements in cameras and displays in newer phones can help Samsung inspire more sales of its latest handsets, while a larger issue for many customers are the high prices of the devices, King said.  “I believe the emergence of $1,000 handsets last year clarified the ceiling of what the vast majority or consumers will pay for a smartphone.  So it’s important for Samsung to either deliver significant, compelling new features or performance capabilities, or to show greater flexibility in pricing.”

Tuong Nguyen, an analyst with Gartner, said a big issue that Samsung and other handset makers have to deal with when releasing new models nowadays is that for buyers, it’s tough to differentiate because all the major vendors have large screens, plenty of storage and all the rest.

For Samsung and other smartphone makers, there are no current “must-have” features that can be included in a handset to assure huge resulting sales of the phones, he said. “I think there are numerous features that are compelling, but they need to improve and come together in a way that increases the value proposition of smartphones in a significant way.”

What could boost sales for a phone would be the ability to use a smartphone as a hub or centralized device so users could control different aspects of their tech lives without having to open multiple apps or make other adjustments, Nguyen said. “I would categorize all this under learn, predict, surprise and anticipate. This is the type of step change we need to drastically attract users,” Nguyen said.

Another analyst, Rob Enderle, principal of Enderle Group, told eWEEK he expects the new Samsung flagship devices to include 5G, a bump in performance and features such as battery life and camera quality, as well as enhancements in wireless charging–including a rumored feature that enables the phone to charge another device wirelessly at the same time.  What Samsung will have to try to overcome, though, is that because wide deployments of 5G is still more than a year away many users may be satisfied to hang on to their existing handsets for now, Enderle said.

“Smartphones have been really good for years now, and the natural need to replace them has dropped sharply over time,” said Enderle. “In the current period, this behavior is likely more directly related to a reduction in effective demand-generation.”