Silicon photonics continues to progress but is yet to be adopted for high-performance computing and server architectures, according to market research firm Light Counting.

During the panel discussion on high-performance computing and silicon photonics, Intel’s Fabrizio Petrini addressed head-on why optics had such a low profile at the show. “The reality is there is a lot of skepticism about this technology. The adoption is not going to happen anytime soon,” he said.

Systems designers don’t see the implications until they embrace this technology. But factors are aligning for change, and a transition point is being approached in how systems are built, he says; the implications for systems and disaggregation are enormous.

Optical switching is another technology that has been on the fringes of the market for decades. It was all the rage from 1998-2001, but then fizzled out as there weren’t any large scale commercial deployments of photonic switches.

LightCounting reported in August that Google had been using photonic circuit switching in its cloud resident data centers for several years.  The 136×136 port optical circuit switch is Google’s own design.

At SC22, a start-up, Drut Technologies, demonstrated its interface card working with a photonic switch at the top of a SuperMicro server rack. The system allows the server’s CPUs to dynamically configure the resources they need (memory, GPUs) tailored for workloads. 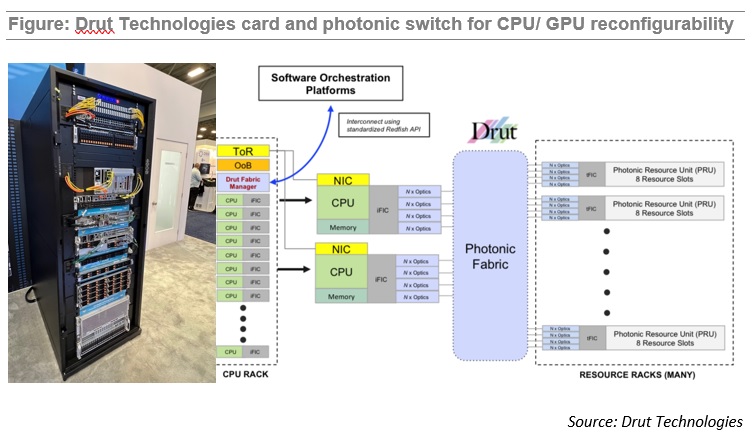 “What we are building is a networking bypass, a secondary fabric,” says William Koss, CEO of Drut Technologies.
Drut uses a third party’s low-loss MEMS-based non-blocking optical switch that can be as large as 384×384 ports. The start-up has developed an input-output card with an FPGA that supports Drut’s fabric control software, signaling, and 4 QSFP optical modules for up to 4x100Gbit/s interfaces. Drut’s card supports PCIe over an optical interface.
References:
https://lightcounting.com/research-note/december-2022-high-performance-computings-in-between-period-263
https://drut.io/drut-blog/f/drut-demonstration-at-super-compute-22
https://www.lightcounting.com/research-note/august-2022-google-uses-optical-circuit-switching-for-its-data-centers-250