SoftBank could be interested in relinquishing control of Sprint and retaining a minority stake if that’s what it takes to merge the US carrier with T-Mobile US, Reuters reports, adding that the parties might enter talks after the spectrum auction ends. Deutsche Telekom has said it wants to keep its stake in T-Mobile.

SoftBank has not yet approached Deutsche Telekom to discuss any deal because the U.S. Federal Communications Commission (FCC) has imposed strict anti-collusion rules that ban discussions between rivals during an ongoing auction of airwaves.

After the auction ends in April, the two parties are expected to begin negotiations, the sources told Reuters this week.

Two and a half years ago, SoftBank abandoned talks to acquire T-Mobile for Sprint amid opposition from U.S. antitrust regulators. That deal would have put SoftBank in control of the merged company, with Deutsche Telekom becoming a minority shareholder.

T-Mobile was worth around $30 billion at the time, but its market value has since risen to more than $50 billion as it overtook Sprint as the No. 3 wireless carrier by subscribers. Sprint’s market value is around $36 billion, roughly the same as in 2014.

Deutsche Telekom Chief Executive Tim Hoettges has said in recent months that the German company is no longer willing to part with T-Mobile, prompting SoftBank to explore a new strategy towards a potential combination, the people said. Deutsche Telekom owns about 65 percent of T-Mobile.

SoftBank, which owns about 83% of Sprint, has been frustrated with its inability to grow significantly on its own in the U.S market, which is dominated by Verizon Communications Inc  and AT&T, the two largest U.S. carriers.

While SoftBank is still open to discussing other options, it is now willing to surrender control of Sprint and retain a minority stake in a merger with T-Mobile, the sources said. They asked not to be identified because the deliberations are confidential.

Investors have said a merger between T-Mobile and Sprint, ranked third and fourth respectively, would still face antitrust challenges, but made strategic sense as the industry moves to fifth-generation wireless technology.

Carriers will need to spend billions of dollars to upgrade to 5G networks that promise to be 10 times to 100 times faster than current speeds. 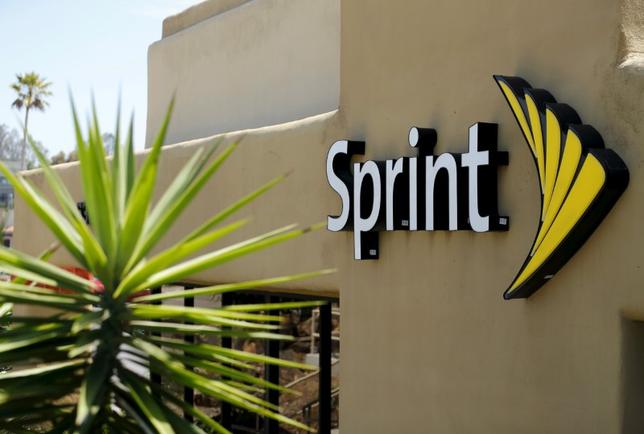 With the advent of 5G, Deutsche Telekom may receive offers for T-Mobile from other U.S. companies, such as DISH Network Corp and Comcast Corp. Sprint could also be an acquisition target for other companies, the sources said.

Under CEO John Legere, T-Mobile has rolled out unlimited data plans and international roaming packages. Combined with aggressive marketing, this has boosted T-Mobile customer base at the expense of its rivals.

T-Mobile is now almost as big as Deutsche Telekom’s German business. “We are not in the mood of selling the business,” Hoettges told investors last November.

While Sprint’s customer base has also grown under CEO Marcelo Claure and financials have improved, the growth was primarily driven by heavy price discounts. Despite new investment, the company’s network is still viewed by many consumers as weaker than its rivals.

Reuters could not determine how much of a premium SoftBank may want Deutsche Telekom to pay for control of Sprint.

Barclays analysts wrote in a note in December that a merger of T-Mobile and Sprint could result in $25 billion to $30 billion in synergies but said, “it is not imminently clear to us that the various regulatory agencies would reverse course having already blessed the outcome of a four-player market.”

The FCC and the U.S. Department of Justice sent strong messages in 2014 that they did not want Verizon, AT&T, Sprint and T-Mobile to merge among themselves.

Since then, AT&T acquired satellite television provider DirecTV and signed an agreement to buy media giant Time Warner Inc, though that deal is still under regulatory review and has attracted criticism from U.S. President Donald Trump. Verizon has also been exploring other acquisitions.

Antitrust experts said it was difficult to predict how the Trump administration would view a T-Mobile-Sprint merger since key antitrust appointments at the Justice Department have not been made. It is also not clear how such a combination would be viewed by the FCC, whose new chairman Ajit Pai is viewed as more business-friendly than his predecessor.

“I am of the camp that that will not happen even in a Trump administration,” Christopher Marangi, co-chief investment officer at GAMCO Investors Inc, said on the prospects of a T-Mobile-Sprint combination. “That kind of merger means lots of job cuts in the U.S.”

Craig Moffett, an analyst at MoffettNathanson, said price wars between Sprint and T-Mobile have driven down overall wireless prices for consumers.

“Antitrust regulators could well argue that this is precisely the dynamic they would want to preserve,” Moffett added.

Son has said he expects his company to benefit from Trump’s promised deregulation of the U.S. economy. After meeting Trump in early December, Son pledged to invest $50 billion and create 50,000 jobs in the United States.

Regarding the above Reuters article citing Softbank’s plans to make an offer to Deutsche Telekom for a merger between S and TMUS, in which Softbank will give up control of S for a minority stake in the combined company.

Current FCC anti-collusion rules bar carrier discussions during the broadcast incentive auction. The auction will enter the last stage (the assignment phase) on March 6 and is anticipated to conclude in April, when Softbank could approach Deutsche Telekom. Despite a solid set of data on the record at the FCC and DOJ endorsing a four-player market, and in contrast to 2014, we believe a merger in 2017 would pass regulatory muster due to:

(1) a political and regulatory Administration change,

(2) less spectrum capacity at T-Mobile, and

(3) commitments to increase coverage and competition in rural areas.

■ Déjà vu. In 2014, Softbank failed to convince the Democratic-led FCC commission that a merger would strengthen sustainable competition. Sprint argued that the wireless carrier market would move from a two-player dominant market to a more viable three-player market. Since then, while cutting capital spending, S has made solid strides in improving its network performance, stabilizing its subscriber base, innovating around its spectrum assets, growing EBITDA, and improving liquidity. While the industry remains in a negative Net Present Value (NPV) situation for incremental capital spending, we think that Sprint, with High Performance User Equipment (HPUE), can maintain low capex spending and is on a path toward positive free cash flow, despite a more fierce-than-ever competitive backdrop.

We believe a deal also makes sense to T-Mobile, due to its ability to tap Sprint’s treasure trove of more valuable HPUE-based spectrum, which should help maintain subscriber momentum.

■ Strategic timing makes sense. An M&A announcement is slightly ahead of our expectations—but makes sense. We never believed a DISH/TMUS combination made sense, due to a lack of synergies/ wireless experience and declining spectrum value; many DISH bulls believe its approaching spectrum buildout milestones would force the company to sell or make a carrier acquisition. Softbank is wise to move now, with both CMCSA and CHTR looking to launch their MVNOs later this year and next, respectively. Moving later risks Sprint being left in the cold with major downside risk if a cable company, having learned more about the wireless disruptive opportunity through its own assets and an MVNO model, subsequently moved to acquire T-Mobile.

■ Market is undervaluing synergies. We see substantial upside to the $3B in synergies being priced in by the market today. (Applying a 7x EV/EBITDA multiple on the EV of the combined entity and deducting the combined EBITDA of both companies would yield the $3B in opex synergies.) However, we believe there is major capex synergy upside, which we do not think the market anticipates, as it does not appear to be pricing in major capex saving benefits from high-power spectrum for the combined S/TMUS entity.

■ Positive implications for Shenandoah Telecommunications Company (SHEN), negative for United States Cellular Corp (USM). We believe a combined S/TMUS would provide a stronger partner network for SHEN. However, given TMUS’s growing focus on rural coverage, a merger would lessen the likelihood of TMUS acquiring USM, and its buildout poses significant risk to USM’s high-margin roaming revenues from Sprint. USM acquired 700 MHz spectrum in the Midwest region in recent years, likely as a hedge against declining roaming revenues and to better position itself as a takeout candidate, in our view. This spectrum is compatible with TMUS, which is rapidly rolling out coverage in Chicago on 700 MHz A-Block. However, if an S/TMUS does materialize, the potential for a USM acquisition will greatly diminish.