According to research firm Cignal AI, first quarter 2018 growth in optical hardware sales in the Asia Pacific region was fueled by additional increases in spending outside of China. Sales in the EMEA region also grew YoY, and larger equipment vendors express optimism about incumbent operators future spending. Cignal AI’s report also illustrates an ongoing a spending decline in the North American market, which has proved weaker than expected. 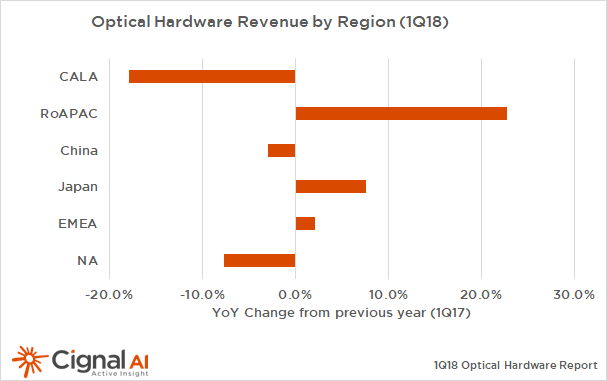 “The massive spending in China during 2017 has slackened during 1Q18, resulting in flat year-over-year growth. A precise determination of results for the region is complicated by the ongoing ZTE export ban and ZTE’s communication blackout,” said Andrew Schmitt, lead analyst for Cignal AI. “Meanwhile, North America continues to be weaker than expected in an aggressive pricing environment.”

Cignal AI’s Optical Hardware Report is issued each quarter and examines optical equipment revenue across all regions and equipment types. Shipment information and guidance from individual equipment companies are included, and forecasts are based on spending trends in each region and the equipment types within those regions.

About the Optical Hardware Report

Full report details, as well as articles and presentations, are available to users who register for a free account on the Cignal AI website.