India has the second largest number of Internet users in the world- second only to China.  But only in the last two years has India moved to true broadband wireless service.   Mukesh Ambani, head of Reliance Industries, one of India’s largest conglomerates, has shelled out $35 billion of the company’s money to blanket the South Asian nation with its first all-4G network. By offering free calls and data for pennies, the telecom latecomer has upended the industry, setting off a cheap internet tsunami that is opening the market of 1.3 billion people to global tech and retailing titans.

The unknown factor: Can Reliance reap profits itself after unleashing a cutthroat price war? Analysts say the company’s ultimate plan, after connecting the masses, is to use the platform to sell content, financial services and advertising. It could also recoup its massive investment in the years to come by charging for high-speed broadband to consumers’ homes and connections for various businesses, according to a person familiar with the matter.

Business Standard says that according to revenue figures of the industry for the April-June quarter, Jio has become the second biggest wireless network operator by revenues, overtaking Vodafone.

In fact, both Vodafone and Idea reported a revenue decline of 7 per cent and 5.2 per cent respectively in the reported quarter. Airtel though managed to increase its adjusted gross revenue (AGR) by 1 per cent, thanks to income from national long distance (NLD) services.

According to a report by JP Morgan, Reliance Jio keeps flourishing in a continually stressed industry, which is why the industry may continue to be in stress.

Meanwhile, zeebiz.com reports “Reliance Jio impact: 15,000 people lost jobs, just 3 companies left in 2 years.”  Apart from declining financial health of incumbents, there have been massive job losses owing to mergers and sector consolidation. Experts estimate the number of job losses to be around 12,000-15,000 in the last two years, with a major shedding from Vodafone and Idea Cellular duo.

Reliance Jio has been gaining subscribers and revenue market share at a rapid pace. But for the incumbents, including Bharti Airtel, Vodafone India, Idea Cellular, there has been declining average revenue per user (Arpu) and margins with high debt levels. Together, the telecom industry has a cumulative debt of Rs 3.6 lakh crore.

Analysts from Jefferies say that the competitive intensity will remain high as Jio and Bharti focus on subscriber additions. “We expect increased competitive intensity in the postpaid and feature phone segments. The market share is expected to stabilise in the next 12 months. Post that, there will be a gradual Arpu recovery due to customer willingness to pay higher.”

“The next battleground is the 500 million non-LTE subscriber base, which would include 400 million 2G subscribers. Half of the 2G subscribers are low-value subscribers with monthly spend of Rs 50-80. Content and advertising will emerge as key pillars to increase average revenue per user and profitability for the sector in the medium term,” according to Deutsche Bank Research. 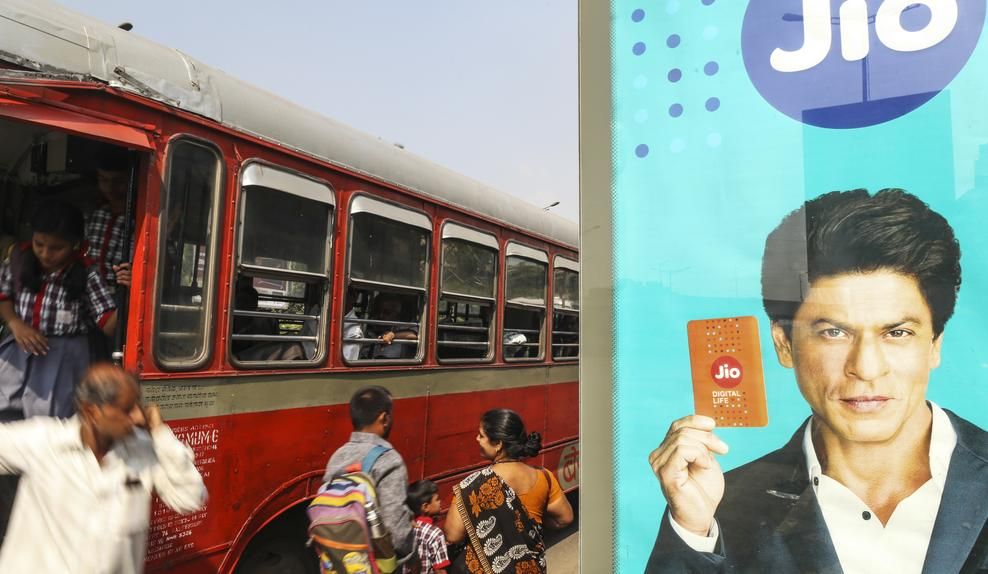 Mr. Ambani’s project has the potential to give India the largest—and most diverse—connected population in the world, with low-cost access to data helping to level the playing field between rich and poor.

It also could revolutionize retail. Mr. Ambani’s success or failure could affect Alphabet Inc.’s Google and Facebook Inc.’s WhatsApp, which have poured resources into developing products for the Indian market, and Walmart Inc. and Amazon.com Inc., which have invested billions here on logistics for online shoppers. To profit, they all need people connected to the internet.

India has more internet users than the U.S., but a low percentage of the country is online. Slow download speeds are a drag on building subscribers.

Mr. Ambani wasn’t available to comment, according to a Reliance spokesman. The company “has unleashed huge data potential in the country,” the spokesman said. “Digital life will no longer be the privilege of the affluent few.”

There are 390 million internet users in India, according to Bain & Co., but the penetration rate is still only 28%, compared with 88% in the U.S. The country’s e-commerce market is expected to be worth $33 billion this year, three times what it was in 2015, but less than 3% of India’s overall retail market, according to research firm eMarketer.

Companies are after customers like 59-year-old potato farmer Govind Singh Panwar. His home in the Himalayan foothills is built of mud and stone, and his village has no paved roads or indoor plumbing. Still, broadband internet has arrived.

“I bought our first fridge” online, Mr. Panwar said. “It’s a rare thing in a village.”  He got online last year with Reliance Jio Infocomm Ltd., Mr. Ambani’s telecom company, which built a tower nearby that beams his phone nearly unlimited 4G data for about $2.10 a month. 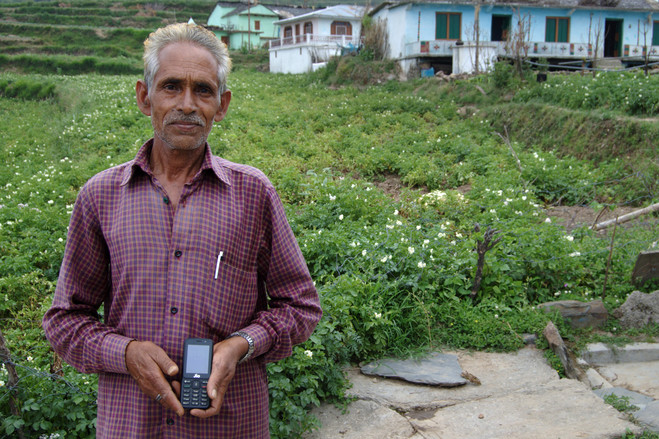 Jio, which means “to live” in Hindi, has signed up 215 million subscribers since it went live in 2016, making it India’s No. 4 mobile provider, after Bharti Airtel Ltd., with 345 million, Vodafone Group PLC and Idea Cellular Ltd.

Mr. Ambani’s foray started in 2010, when he bought a company that had just acquired a pan-India 4G license. That was a risky move at a time when fewer than one in 10 Indians were online. Airtel and Vodafone were still focused on rolling out 3G services, and few Indians owned 4G-capable smartphones.

Promising MarketOnline sales in India have grown rapidly butare still just a sliver of all Indian retail.Source: eMarketerNote: 2018 and later are projections.

Fourth generation, or 4G-LTE networks provide significantly faster speeds than 3G, enabling more content like streaming video and music. They also provide the steadier connections important for online shopping, which can be difficult on patchy networks. 4G networks are common in the U.S., Europe and East Asia.

Mr. Ambani, now 61 and worth more than $48 billion, had just finished building what some have dubbed the world’s most expensive home, a 27-story mansion on a hill with views of the Arabian Sea. It was packed with bling—helipad, home theater, gym, garden, pool—but the internet connection was bad.

When his daughter came home from Yale University during a break, she struggled to submit her course work online. “Dad, the internet in our house sucks,” she complained, according to a story Mr. Ambani later recounted at an event.

At the time, India’s telecom industry executives and analysts agreed there was need for more speed, but they doubted enough people would be willing to pay for it. Indians then were spending only about $2 a month on their cellphones, the vast majority of that on voice calls.

Some rivals began rolling out 4G services in some cities, but Mr. Ambani wanted to build a network that would also cover more than 18,000 cities and towns and 200,000 villages, touching some places that didn’t have electricity yet. That required more than 200,000 cell towers and 150,000 miles of high-tech fiber-optic cable, enough to encircle the Earth six times, according to the company and people familiar with the matter. The construction is essentially complete. Wading through India’s infamous red tape required as much time as the physical infrastructure.

India’s average price for cellular data has swooned amid new competition, and usage has skyrocketed.

To protect its sprawling web of cables, Reliance hired a national network of ex-army staff to look after its lines. It left a few feet of spare cable coiled on top of manhole covers to show thieves looking for copper that the mostly plastic materials weren’t worth pulling out, and local people were paid to keep an eye out for any problems.

“They had audacity, execution, and were financially capable to pull it off,” said Ankit Agarwal, chief executive of telecom products at India’s Sterlite Technologies Ltd. , which supplied and helped install the fiber.

At the launch of service in September 2016, Jio made phone calls and text messages free for subscribers, and made unlimited data free for the first three months, eventually extending it to six months. After that, Jio’s data price would be a quarter the industry average.

Subscribers in India typically use prepaid plans without contracts, making it easy to switch carriers by swapping in a new SIM card from a competitor.  One adversary that has thrown in the towel: Reliance Communications Ltd., formerly part of the Reliance empire but taken separate by Mr. Ambani’s brother, Anil Ambani, after a family dispute. The company, under pricing pressure from Jio, closed its mobile business in late 2017.

The price war has cut industry wide revenue per user—now averaging $1.53 a month, compared with about $2.50 in 2016. Jio beats the average, at $1.89 a month, but the number has been falling since its launch.

The result has been a data binge. Jio transmitted more data in the first year of its operation than any carrier ever world-wide, according to research firm Strategy Analytics. India last year surpassed the U.S. in the number of apps downloaded from the Google Play store, according to mobile-app analytics firm App Annie. Monthly data traffic in India per user has jumped 570% in the two years since Jio launched, according to Morgan Stanley .

When Jio realized it was reaching the consumers who could afford the data but not the 4G-enabled smartphones, it built a new type of “smart” feature phone that worked on 4G and had some smartphone features. Consumers could own a JioPhone for a $23 security deposit—refundable if they return the phone. It launched in September 2017 and has overtaken Samsung Electronics Co. to capture 47% of the feature phone market, according to research firm Counterpoint.

Companies such as Amazon.com are depending on the new pool of users. Amazon has tweaked its model in India by introducing services like cash on delivery, in which customers can pay with cash when items arrive at their door, since few people have credit cards. The retailer has also deployed swarms of delivery men on motorbikes, so they can negotiate chaotic city traffic.

Google, which has been effectively shut out of China since 2010, has been rolling out new features to cater to users in India, testing products that might also work in other emerging markets, such as Indonesia. It launched a version of its YouTube app, called YouTube Go, designed to work on inexpensive smartphones. It created a mobile payment app for India, called Tez, that works without a credit or debit card. It is also working to make many of its services work with local languages.

At a July investors’ meeting, Mr. Ambani made his ambitions clear. “Even after serving the needs of our 215 plus million customers, the capacity utilization of the Jio network is less than 20%,” he said. “We are determined to connect everyone and everything, everywhere.”

4 thoughts on “Reliance Jio Blankets India with Inexpensive 4G Service; Where are the Profits?”