The managed SD-WAN services market is expected to generate more than $282 million in revenue in the U.S. by the close of 2018, according to researcher Vertical Systems Group. The figure is based on billable U.S. customer sites and WAN access connections installed and under management.  Rick Malone, principal of Vertical Systems Group, said he expects a major boost in revenue next year with network operators fully ramped up to sell, deliver and support managed SD-WAN services.

A managed SD-WAN service is defined as a carrier-grade network offering for enterprise and business customers, which is managed by a network operator, and delivered over a software-defined network (SDN) service architecture that has separate control (overlay) and data (underlay) planes, according to MEF.

One main reason the market’s revenue is small is because money is new to it. However, SD-WAN has proved to be more complex than customers previously believed. “Prior to this, most providers supported customers with pilot SD-WAN services that were not substantively monetized,” Malone said. “A key driver for managed services is the growing appreciation that migration to SD-WAN is considerably more complex than the promise of ‘easily deployed’ plug-and-play DIY solutions.”

“In 2019, we’ll continue to see SD-WAN as a key enabler for enterprise customers’ digital transformations. The integration between MPLS and internet, combined with the move to cloud, requires a different network and security design – particularly on a global scale. With SD-WAN, enterprises can address these requirements and introduce automation to make networks even more efficient. Future-proof solutions with simple interfaces, like Flexible SD-WAN from Orange, enable enterprises to use their networks dynamically to anticipate and respond to changes in their business environments while migrating applications to the cloud.” Rob Willcock, senior vice president, Americas, Orange Business Services. 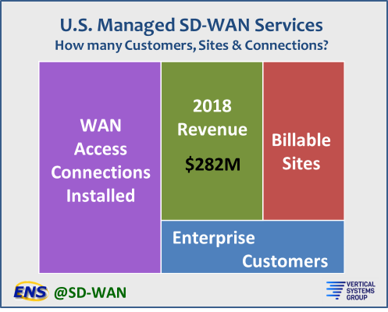 In 2018, Cisco integrated its Viptela SD-WAN, which is bought in 2017 for  $610 billion, more deeply across its enterprise routing platform. Also this year, VMware integrated VeloCloud’s SD-WAN technologies—which it bought last year for an undisclosed sum, into its product lines. Both acquisitions have turned out to be solid moves. Oracle is looking to duplicate Cisco and VMware’s successes next year after buying buying Talari Networks , also for an undisclosed sum, this year.

While some of the current SD-WAN vendors will fall by the wayside next year, others will be bought by companies that serve the enterprise and business sectors.  Oracle, Cisco and VMWare?Dell bought such SD WAN start ups in 2018.

Another trend that will likely continue into 2019 is more firewall vendors entering the SD-WAN market. In 2018, Fortinet and WatchGuard Technologies moved from supplying security to SD-WAN vendors to offering their own flavors of it.

There will likely be more partnerships between SD WAN vendors and cloud providers, similar to the deal that Versa Networks did with Amazon Web Services (AWS) to offer SD-WAN to AWS partners. Citrix and Riverbed also announced availability of their SD-WAN offerings on Microsoft Azure cloud and AWS in 2018.

At this point, SD-WAN research is a “moving target,” said Erin Dunne, Vertical’s research services director, in a video. “First of all the issue is definition. There’s no true definition out there. We pride ourselves on being able to lay out definitions that are from a market perspective — what service providers are selling and what enterprise, or business customers, are buying or what they want to buy.”

According to Vertical, managed SD-WAN services are a carrier-grade network offering for enterprise and business customers, managed by a network operator, and delivered over a software defined network service architecture that has separate control and data planes. Not included in this analysis are do-it-yourself SD-WAN solutions purchased directly from an SD-WAN technology supplier or a systems integrator.