Vertical Systems Group (VSG) announced that six companies achieved a position on its 2018 U.S. Carrier Ethernet (CE) LEADERBOARD (in rank order based on year-end 2018 retail port share): CenturyLink, AT&T, Verizon, Spectrum Enterprise, Comcast and Windstream.   CenturyLink powered its way to the top spot in the year-end 2017 leaderboard after its acquisition of Level 3 Communications.   AT&T led the U.S. Carrier Ethernet ranking from 2005-2016. Cox dropped out of the leaderboard and into VSG’s challenge tier on slower-than-market port growth.

To qualify for a rank on this 2018 LEADERBOARD, network providers must have 4% or more of the U.S. Ethernet services market. Shares are measured based on the number of billable retail customer ports in service as tracked by Vertical Systems Group. “Despite its relative maturity, the Ethernet market continues to expand at a healthy pace. U.S. port installations grew more than twelve percent in 2018, in line with our forecasts,” said Rick Malone, principal of Vertical Systems Group. “However, revenue growth is not keeping pace with port growth due to falling prices and changing service mixes. One notable catalyst is the deployment of SD-WAN, which is resulting in customers shifting from switched Ethernet services to dedicated Internet access.”

In addition to the LEADERBOARD providers, all other companies selling Ethernet services in the U.S. are segmented into two tiers as measured by port share.

The Challenge Tier includes providers with between 1% and 4% share of the U.S. retail Ethernet market. For year-end 2018, the following seven companies attained a position in the Challenge Tier (in alphabetical order): Altice USA, Cogent, Cox, Frontier, GTT, Sprint and Zayo. 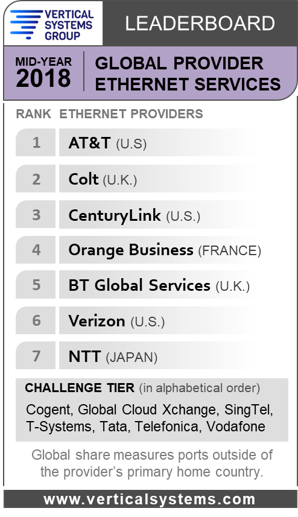