Driven by cloud IT service adoption, the market for global enterprise network services is undergoing a generational shift in both technologies and the provider landscape. Infrastructure and operations leaders must adapt their network sourcing approaches to reflect this transformation.

The market for global network services continues its rapid evolution. In response to enterprise demand for WANs that can support cloud IT delivery and achieve much higher levels of agility, network service providers (NSPs) have been deploying a range of new software-based networking services. They are also changing their business models to allow for more flexible sourcing. This Magic Quadrant focuses on these transformational technologies and/or approaches that deliver on the future needs of the enterprise, rather than simply concentrating on legacy services. However, delivering a consistent set of service features and user experiences across all these elements on a global basis remains a challenge that requires scale and operational maturity.
Gartner defines the network service global market as the delivery of fixed corporate networking services with worldwide coverage. Services that are evaluated in this Magic Quadrant include both established and emerging global network service categories, such as:

In the past 12 months, Gartner has observed continued evolution of enterprise requirements and buying criteria for global networks. Enterprises are focusing on increasing the agility of their networks and on services that can enable their adoption of cloud IT delivery and eventual adoption of the Internet of Things (IoT). This is leading to most new global networks being based on SD-WAN and making greater use of the internet as a primary WAN transport.
Additionally, enterprises are more willing to utilize smaller providers and innovative services consumed on an as-a-service basis. This places less emphasis on larger providers, network scale and the availability of large numbers of provider staff to deliver customized capabilities to address site- or application-specific requirements.
Both enterprises and network service providers are taking advantage of the marketplace created by colocation hubs, such as Equinix and Digital Realty, to allow them to source access that is distance-insensitive at the national or even regional level. This simplifies the overall design and reduces the need for the deployment of large numbers of network points of presence (POPs; see “Five Key Factors to Prepare Your WAN for Multicloud Connectivity”). However, coverage for at least the country level is still important, both to reduce costs and to improve performance when accessing cloud services and network-based virtual functions. The trend of moving away from customized solutions toward standard off-the-shelf managed services continues, with more and more services consumed on an as-a-service basis. Although uptake of NFV and vCPE has been slower than expected due to relatively high prices and technological limitations of some early implementations, the momentum behind these services is increasing, as enterprises see the value of the increased agility they can bring. (For example, in the 2018 iteration of this Magic Quadrant, less than 50% of providers offered these services. In this 2019 edition, that number is almost 90%.)
Network on-demand services are gaining in popularity, not to reduce costs by varying WAN bandwidth over the course of the day or week, but rather to dynamically adjust the capacity of different network services (e.g., Shrink MPLS and grow internet access as SD-WAN is rolled out). This allows enterprises to accommodate new applications and even create connections to new destinations, such as additional cloud providers, on demand, potentially allowing for dynamic load balancing of cloud providers and cloud performance optimization. However, these offerings are in their infancy in terms of functionality and coverage.
While delivering against a strong technological roadmap is important, it must be combined with good operational performance to deliver and sustain these services. Some service providers have been struggling to deliver the new capabilities they are offering with the levels of quality enterprises require.
To strengthen the focus of this research on these key trends and capabilities, Gartner is no longer evaluating SIP trunk services, managed LANs or wireless LANs (WLANs). SIP trunk services will be covered in a separate Market Guide.

The inclusion and exclusion criteria for this year’s Magic Quadrant, although similar to prior years, have been adjusted to reflect these trends. 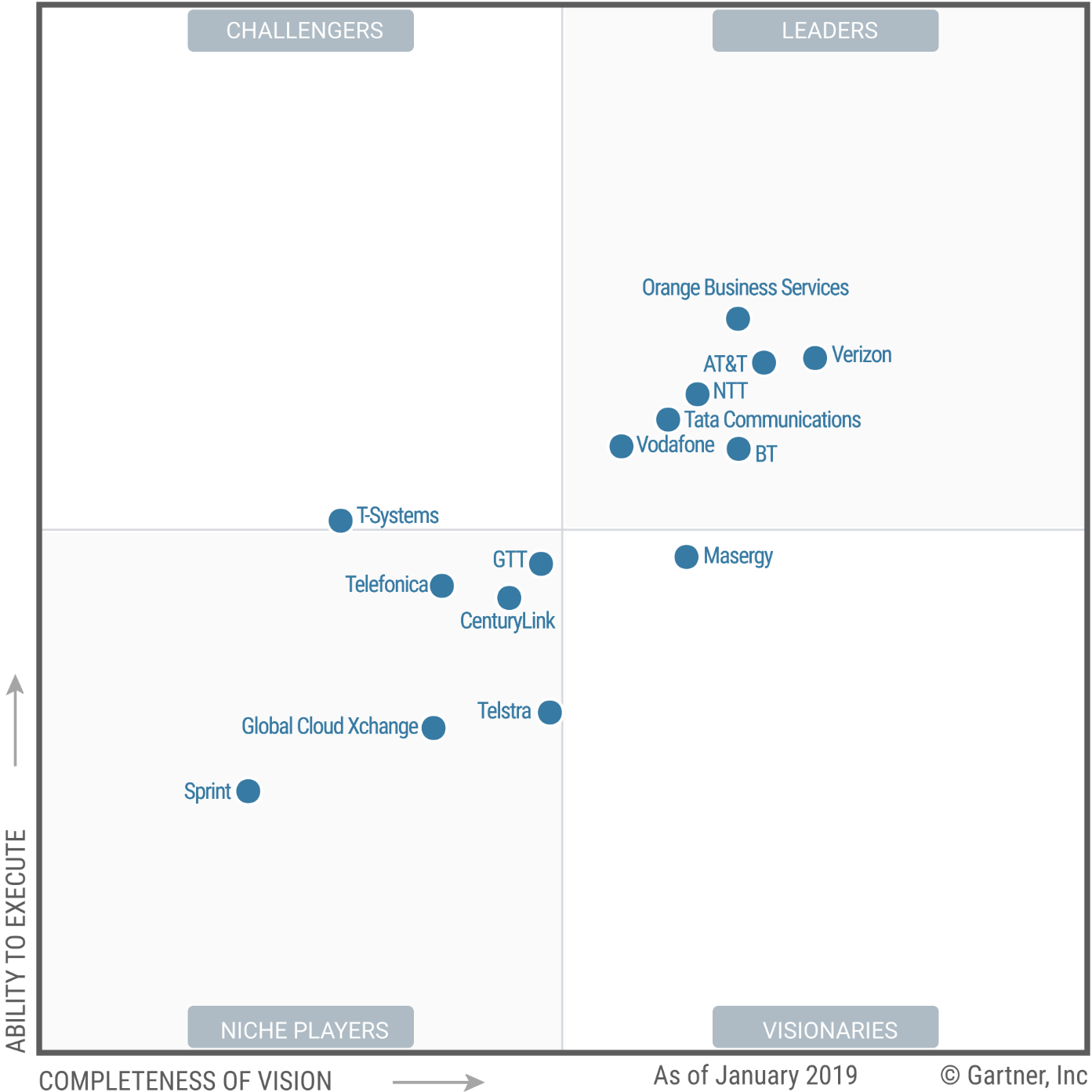 One thought on “Gartner: Magic Quadrant for Global Network Services has Orange Business #1”