Global service provider voice over Internet Protocol (VoIP) and IP multimedia subsystem (IMS) product revenue fell to $4 billion in 2018, a year-over-year decline of 8 percent. Overall worldwide revenue is forecast to decline at a compound annual growth rate (CAGR) of 2 percent from 2018, falling to $3.6 billion in 2022. This decline is caused mainly by slowing voice over long-term evolution (VoLTE) network deployments and competitive factors leading to lower prices. Big sales volumes continue in India and China, but pricing in those two countries is lower, which is stunting growth.

Huawei was the leading vendor in 2018 with 27 percent share of global revenue. Huawei was followed by Nokia with 23 percent and Ericsson with 20 percent. ZTE and Ribbon Communications rounded out the top five. For the full year, Nokia and Metaswitch were two noteworthy vendors posting revenue growth. 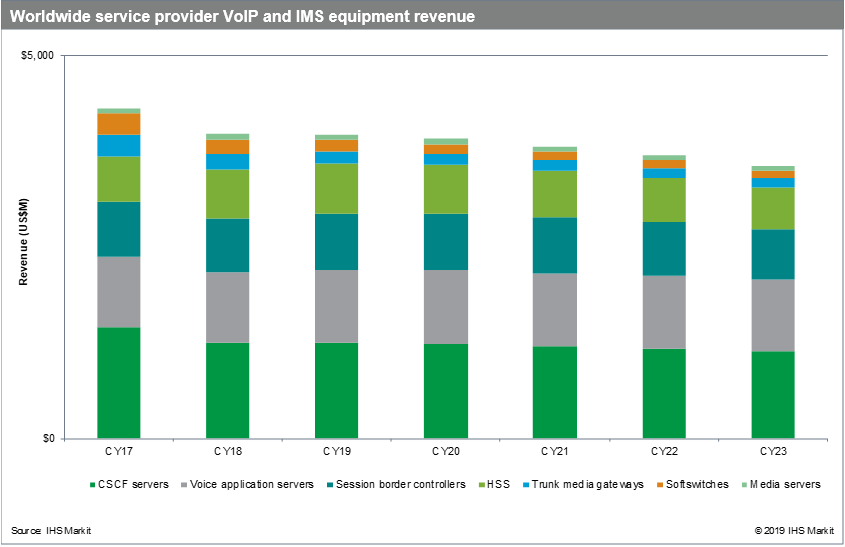 IMS began as a 3GPP technology for 3G mobile networks, but has been adopted as a broader standard. It is in the development and early testing phase, and its impact remains to be seen. IMS builds on the SIP protocol.

IP Multimedia Subsystem (IMS) is a generic architecture for offering multimedia and voice over IP services, defined by 3rd Generation Partnership Project (3GPP). IMS is access independent as it supports multiple access types including GSM, WCDMA, CDMA2000, WLAN, Wireline broadband and other packet data applications. IMS will make Internet technologies, such as web browsing, e-mail, instant messaging and video conferencing available to everyone from any location. It is also intended to allow operators to introduce new services, such as web browsing, WAP and MMS, at the top level of their packet-switched networks.

IMS Release 7 is also the basis for the CableLabs PacketCable 2.0 standard which is currently under development. This is an architecture specific to service delivery over broadband cable networks which covers VoIP, cellular integration and enhanced telephony.

Some of the possible applications where IMS can be used are: