SK Telecom today announced its strategy to build ‘5G Cluster’ nationwide to further foster 5G services and benefits.  Since the world’s first “5G” commercialization in April 2019, the number of 5G subscribers in South Korea has surpassed 1 million- far more than in any other country.

SK Telecom’s ‘5G Cluster’ is an advanced 5G environment with cutting-edge ICT including AR, VR, and AI. The Korean telco plans to build ‘5G Cluster’ in business districts, parks, factories, and etc. to provide differentiated 5G service and benefits in both of B2C and B2B sectors.

In the B2C sector, SK Telecom will operate ‘5G League of Legends (LoL) Park’ at Jonggak, Seoul, starting from July 25. At ‘5G LoL Park’, customers can view messages from supporting fans nationwide with Augmented Reality (AR) by facing their smartphones toward a certain location. Customers can also enjoy VR live broadcasting and VR playback during the games.

Starting this August, SK Telecom will provide a service that allows customers to meet a variety of animals, including giant cats and wyverns (a winged two-legged dragon with a barbed tail), using AR in Olympic Park and Yeouido Park, Seoul. For example, if customers hold their smartphones toward ‘The Lone Tree’ in Olympic Park, a giant cat will appear on smartphone screen in AR.

Moreover, the company plans to transform Jamsil Students’ Gymnasium into a 5G Stadium. SKTelecom will further expand 5G experience spaces with immersive media by the end of this year.

Furthermore, SK Telecom plans to build a total of 12 Mobile Edge Computing (MEC) for 5G networks, to be located at key regions nationwide (South Korea). In particular, the company will provide dedicated 5G edge cloud service for enterprises that are in need of security and ultra-low latency communications, including manufacturing, media, finance, and game industry.

“With ‘5G Cluster’ as our key focus, SK Telecom will provide customers with outstanding service and pleasure that are beyond the imagination,” said Yoo Young-sang, Executive Vice President and Head of MNO Business of SK Telecom. “We will strive to create added values to different industries and regions.” 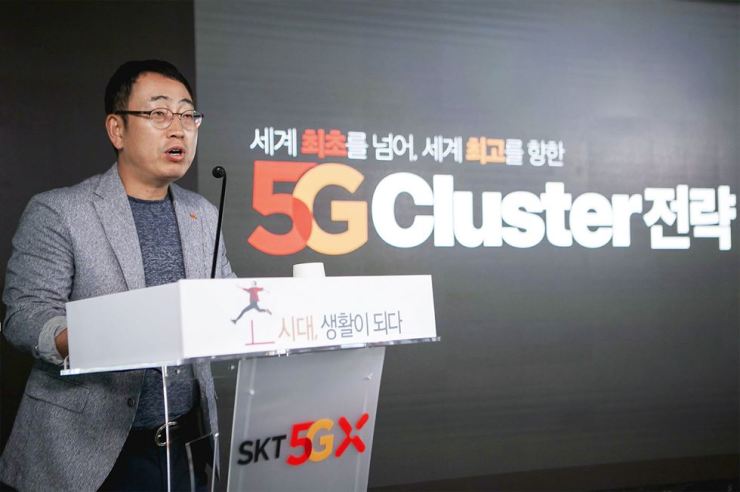 “We are currently constructing smart factory systems at SK Hynix plants. We expect our 5G services will enable many companies in the manufacturing sector to use the automated logistics system and control manufacturing process in real time,” Yoo said. “By accumulating practical experiences with SK Hynix, we will bring about technological innovation.”

SK Telecom is the largest mobile operator in Korea with nearly 50 percent of the market share. As the pioneer of all generations of mobile networks, the company has commercialized the fifth generation (5G) network on December 1, 2018 and announced the first 5G smartphone subscribers on April 3, 2019. With its world’s best 5G, SK Telecom is set to realize the Age of Hyper-Innovation by transforming the way customers work, live and play.

Building on its strength in mobile services, the company is also creating unprecedented value in diverse ICT-related markets including media, security and commerce.