‘Jump AR’ is an augmented reality service that teleports users to an eSports stadium, LoL Park, through their smartphone screens. When accessing the ‘Jump AR’ app, a ‘virtual portal’ to LoL Park in Seoul appears on the screen. If users take a few steps towards the virtual portal, they are transported to the virtual LoL Park.

By moving their smartphones around, users can get a 360-degree view of LoL Park’s interior, leave AR messages of support, watch greeting videos of players, and also read messages left by other eSports fans.

‘VR Replay’ is a new eSports video content that provides highlights from the perspective of characters in the game. By wearing VR headsets, users can watch 360-degree battle scenes from characters’ point of view. SK Telecom applied an advanced technology that combines separate scenes into a 360-degree video content.

The esports arena within the LoL Park, set up by Riot Games in Seoul, can seat 400 spectators, but tickets are frequently sold out early, the Korean telecom firm said, noting that its new AR and VR services will allow esports fans to enjoy games anywhere with smartphones if they fail to obtain tickets.

The Jump AR service offers users the experience of being teleported down to the esports arena, providing a 360-degree view.

The VR Replay offers highlight scenes of games from the perspective of game characters. Wearing a VR headset, users can enjoy an immersive viewing experience as if they are in the middle of the battlefield in the games. 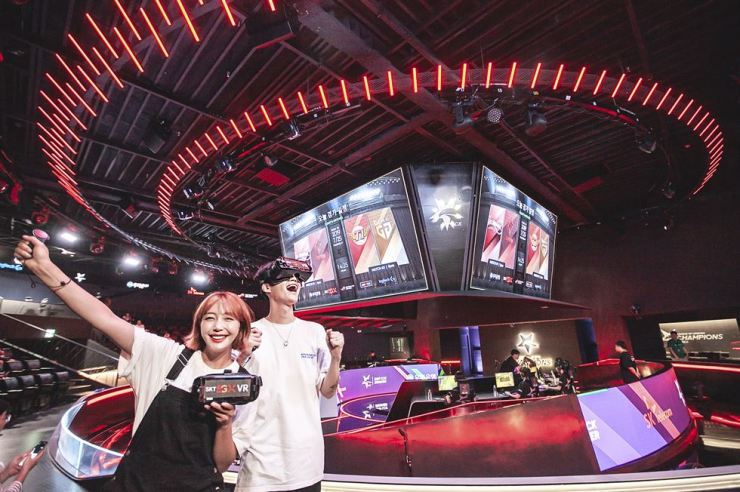 SK Telecom is the largest mobile operator in Korea with nearly 50 percent of the market share. As the pioneer of all generations of mobile networks, the company has commercialized the fifth generation (5G) network on December 1, 2018 and announced the first 5G smartphone subscribers on April 3, 2019. With its world’s best 5G, SK Telecom is set to realize the Age of Hyper-Innovation by transforming the way customers work, live and play.

Building on its strength in mobile services, the company is also creating unprecedented value in diverse ICT-related markets including media, security and commerce.