Shipments in the first quarter fell to 274.4 million units, down from 329.9 million during the same period in 2019, according to the Omdia Smartphone Intelligence Service. This plunge impacted all the major smartphone brands, with nine of the top-10 OEMs suffering shipment declines compared to the first quarter of 2019.

Editor’s Opinion:  The decline will be much greater in Q2-2020 due to all the lockdowns all over the world.  Who needs a smartphone when you’re confined to your residence?  I hardly use mine at all as I prefer a laptop or tablet when at home.

“Early in the first quarter, the smartphone market was sent reeling by the shutdown of production at facilities in China, which halted the manufacturing of phones and their key components,” said Jusy Hong, smartphone research and analysis director at Omdia. “While concerns about this situation have been alleviated, the smartphone brands also faced new challenges, including disrupted launch schedules for new phones. Even more troubling for smartphone makers is a major decline in global demand due to government lockdown mandates.”

Despite expected rebounds in some countries, the rest of the year is expected to be challenging for smartphone OEMs. Omdia forecasts global smartphone shipments will decline to 1.20 billion units this year, down 13.1 percent from 1.39 billion in 2019.

Apple, in third place, saw shipments decline to 38.5 million units, down from 43.8 million a year earlier. The 12.0 percent decline comes during the first quarter, historically the weakest period of the year for Apple.

Rounding out the Top 5 are Xiaomi and OPPO. Out of the Top 10, Xiaomi experienced the second least severe decline in the quarter, of 8.2 percent. Only Tecno, in 10th place, attained a lower decrease better with a 7.6 percent year-over-year decline. Xiaomi shipped 25.3 million units in the first quarter, compared to 27.5 million units in 2019. OPPO, on the other hand, suffered a 19.2 percent decline, with shipments falling to 20.4 million units, down from 25.2 million a year earlier. 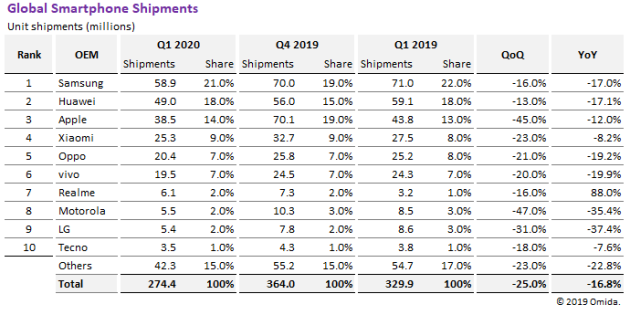 Realme bucks the downturn
The rest of the Top 10 is made up of vivo, Realme, Motorola, LG, and Tecno. The bright spot here is Realme, which achieved year-over-year growth based on its continued success in India. seventh-ranked Realme was the only top-10 OEM to attain growth during the quarter, with shipments totaling 6.1 million units, up 88 percent from 3.2 million during the first quarter of 2019.

For the others in this group, the first quarter brought significant challenges. Looking at vivo, company shipments declined 19.9 percent, falling from 24.3 million units last year to 19.5 million this year. Motorola, in eighth place, saw shipments decline 35.4 percent to 5.5 million units. While Motorola finally launched its updated RAZR, featuring a foldable display, the publicity surrounding that high-profile device was not enough to support the overall performance of Motorola’s product portfolio.

With or without the impact of the pandemic, LG continues to struggle with its mobile handset division. Shipments declined to 5.4 million units, down from 8.6 million units a year ago—a drop of 37.4 percent. Rounding out the top 10 is Tecno, which saw units decline by a relatively modest 7.6 percent, declining from 3.8 million units last year to 3.5 million units in the first quarter.

First-half struggles
“The smartphone market will face major struggles in the first half of 2020 as different countries experience the initial shock and recovery periods at different times. That’s why OEMs are more afraid of second-quarter sales results,” Hong said. “However, Omdia does expect the smartphone market to start to recover in some countries and regions in the second half of the year.”

Early in the first quarter, the most severe impact on the smartphone market was the shutdown of production and supply chain facilities in China. However, fears over a prolonged closure of essential production, supply chain and logistics operations in China have been alleviated, as signs point to economic activity ramping up quickly in the country.

Smartphone makers in the first quarter also had their product-launch plans disrupted by the cancellation of the Mobile World Congress event in Barcelona, Spain, where many companies had planned to roll out new products.

“Because of the cancellation of the Mobile World Congress, and uncertainty in the supply chain, original product schedules had to be re-evaluated,” said Gerrit Schneemann, senior analyst, smartphones, at Omdia. “However, OEMs seem to have found their footing on how to address new device launches going forward.”

Demand disaster
The impact of the outbreak on the smartphone business has now shifted almost completely to the demand side of the equation.

“Although handsets can be produced at nearly normal levels, the markets for these handsets are mostly in some state of shutdown,” Hong said. “Some countries have made more progress in dealing with the outbreak, while others are still in the midst of fighting the pandemic, and still others won’t feel the full effects of the pandemic until later in the year.”

In Europe, where some countries have been under strict lockdown rules for some time, initial efforts have been made to ease restrictions. Similarly, South Korea has taken steps to open up. In other countries, like in some parts of the United States, only the last few weeks of the quarter were impacted by broad stay-at-home orders, while consumer behavior had remained unrestricted until then.

LONDON (April 30, 2020) — Mobile services represent critical infrastructure that’s allowing people to stay connected during the coronavirus crisis. However, that doesn’t mean these services are immune to the pandemic’s economic shock, with 2020 market revenue now expected to come in about $51 billion short of the previous forecast, according to Omdia.

Worldwide mobile communications services market revenue will total $749.7 billion this year, down from the prior forecast of $800.3 billion. This compares to $781.5 billion in 2019. Annual revenue will fall by 4.1 percent this year, with the decline amounting to $31.8 billion.

“Mobile phone companies around the world are experiencing usage spikes as more countries encourage or enforce social distancing and work-from-home rules to slow the spread of the COVID-19,” said Mike Roberts, research director at Omdia. “However, the spikes aren’t enough to overcome the impact of the pandemic on consumer behavior. These rules are having a dramatic impact on various regions of the world, halting new subscriptions and upgrades in the United States, while slashing revenue for operators in Europe.” 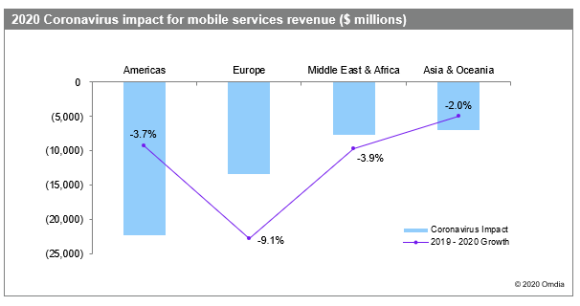 Consumer uptake of 5G will be slower than previously forecasted, due to the economic situation as well as the possibility of delays in 5G network deployment and in the availability of 5G devices. Omdia will release more details on 5G shortly.

In the Americas, mobile service revenue is set to decline by 3.7 percent to $237 billion in 2020. Most of that loss will come in the United States as both net additions and upgrades to higher data plans slow or stop altogether.

Europe will suffer the largest impact of the crisis, with mobile service revenue falling 9.1 percent to $131 billion, representing a downgrade of 9.3 percent compared to Omdia’s previous forecast. This decline will be driven by significant reductions in mobile prepaid revenue and a dramatic drop in inbound roaming revenue.

Vodafone UK, for example, said mobile Internet traffic has increased by 30 percent and mobile voice traffic by 42 percent due to the crisis. At the same time, mobile service providers are seeing new business grind to a halt as retail stores close and consumers stop buying new phones as job losses mount. One example of this widespread trend is AT&T, which is closing 40 percent of its retail stores in the United States.

The Middle East and Africa will see a 3.9 percent decline in mobile service revenues to $84 billion, representing a downgrade of  8.4 percent from Omdia’s previous forecast. Major factors for the decline include the impact of low oil prices on Gulf economies and the fragility of economies and health care systems in parts of Africa.

While the impact of the coronavirus on the mobile market is significant in every region, it pales in comparison to the impact the crisis is having on sectors such as travel, tourism, hospitality and retail, which have suffered partial or complete shutdowns. The International Monetary Fund now expects the global economy to contract by 3 percent in 2020, according to its latest World Economic Outlook, which was released earlier this month.

“The massive contraction will clearly impact every segment of the economy, including mobile, but how long it will last in each country and region is virtually impossible to predict,” Roberts said. “One bright spot is that in China, the first country hit by the pandemic, there are signs that the mobile market and broader economy is starting to come back to life.”

Given the high level of economic and commercial uncertainty created by the COVID-19 pandemic, Omdia will be producing a full revision of its global mobile forecasts next quarter.

We combine the expertise of over 400 analysts across the entire technology spectrum, analyzing 150 markets publishing 3,000 research solutions, reaching over 14,000 subscribers, and covering thousands of technology, media & telecommunications companies.