The Internet of Things (IoT) is rapidly expanding to connect everyday objects in homes, office buildings, retail stores and factories, impacting sectors as diverse as manufacturing, agriculture and public governance.

While conversations around “5-G and beyond” traditionally focus on faster wireless networks, it is inevitable that the majority of devices connected to future cellular networks will be IoT endpoint.  This is primarily due to their sheer scale of deployment. Indeed, massive Machine Type Communications (mMTC) that seeks to connect billions of low-power IoT devices to the cellular network is a pivotal thrust of the 5G vision.  It is one of three 5G use cases for IMT 2020, the soon to be completed ITU st of standards for 5G radio (ITU-R) and non radio aspects (ITU-T).

Low-Power Wide-Area Networks (LP-WANs) are a leading approach to achieve this objective [1]. LP-WANs allow extremely low power devices connected by 10-year AA batteries to transmit at low speeds (few kbps) to cellular base stations as far as 10 kilometers away. 3GPP’s Narrow Band IoT (NB-IoT) is a leading LP-WAN technology being rapidly deployed for cellular networks.  It has been accepted by ITU-R WP5D as part of the IMT 2020 RIT/SRIT submissions from 3GPP, China, Korea, and TSDSI (India).  Other other LP-WAN technologies in the unlicensed bands such as LoRa and SIGFOX have also attained strong market traction. 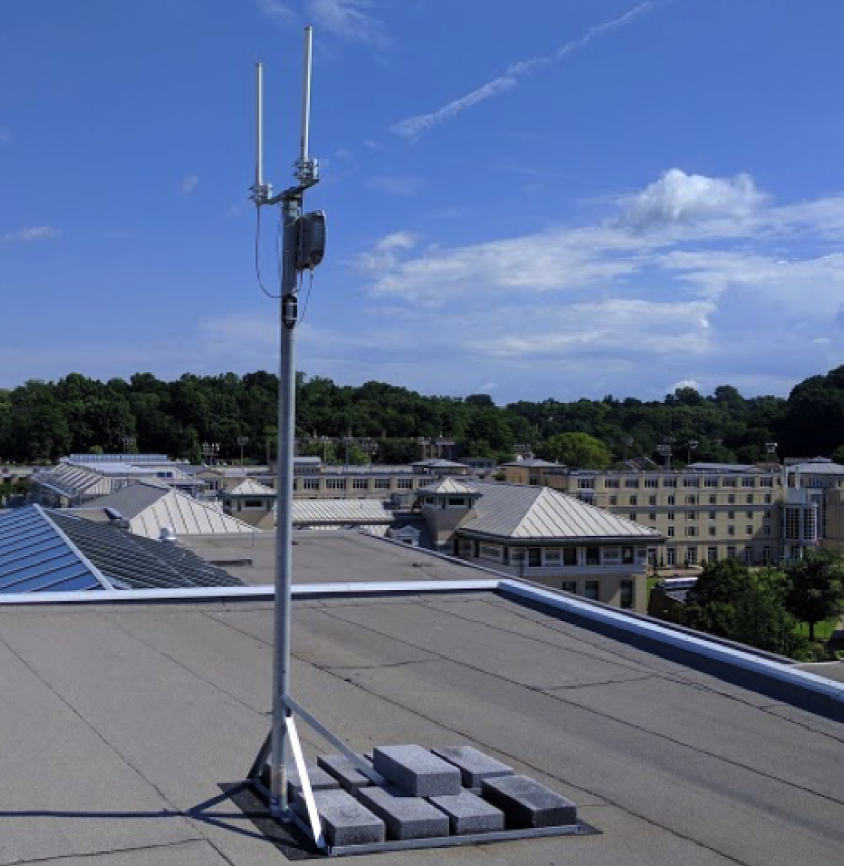 In reality, there remains a large gap between the promised performance of LP-WANs in theory and their performance on the field, particularly in city environments. At Carnegie Mellon University (CMU), we have built a wide-area LP-WAN testbed in our campus and surrounding neighborhoods, spanning much of the City of Pittsburgh [2].

Our findings show that the range of LP-WANs is significantly impacted by large buildings and obstructions, to often less than a kilometer, providing performance significantly below the 10 kilometer performance advertised in more suburban and rural spaces. More problematic is that LP-WAN performance is further degraded by severe collisions between radios deployed at large scale as they are too energy-starved to coordinate prior to transmission. Further, even minor changes to configuration such as choice of transmit frequency can severely degrade device battery-life if not carefully explored and chosen.  That in and of itself is a battery-intensive task.

Across all these diverse challenges a common thread emerges – devices in LP-WANs are too simple and energy-starved to make complex Physical layer decisions that impact their performance, scalability and battery life.  That includes capabilities that have been taken for granted in the traditional mobile phone context.

Our work at the Emerging Wireless Technologies Lab (WiTech) lab at CMU has sought to build next-generation LP-WANs that obtain substantial improvements in range, scale and battery life. Our strategy has been to push complex Physical layer functionalities from the end-user devices to the base station infrastructure and the cloud.

Our results on a 10 square kilometer testbed in the City of Pittsburgh [2] have demonstrated several benefits of our methodology over the years to tackle diverse and fundamental problems in LP-WANs, which have greatly improving scale (by 6x [4]), range (by 3x [1]) and battery life (by 3x [5]) when compared to the state-of-the-art.

Expanding the Range Limits of LP-WANs:

Our approach is best understood by focussing our attention on a specific problem – how do we expand the range of LP-WANs particularly in urban settings where their range is extremely limited by buildings that heavily attenuate wireless signals?

The fundamental problem is that the LP-WAN signals from clients deep inside buildings are too weak to decode at any base station, even if within close proximity. Our solution relies on the multiplicity of LP-WAN gateways, specifically with the rapid deployment of femtocells in the cellular context, on street lamps and traffic lights and beyond.

We seek to transfer received signals across base stations to the cloud.  Those signals may be individually weak, yet can collectively be coherently combined at the cloud to result in a much stronger signal that can be decoded.

This principle closely mirrors the CloudRAN model which seeks to offload computation at the base stations to the cloud. Yet, a key problem remains in the low-power IoT context – how do base stations know which signals to ship to the cloud if an LP-WAN signal is too weak and noisy to be detected at any base station?

Simply transmitting all received signals to the cloud will be expensive in terms of backhaul bandwidth and immensely wasteful. Our scheme is to build a mechanism to make more intelligent predictions about the presence of weak LP-WAN signals buried underneath the noise at the base stations. We do this by looking for unique and telltale patterns in the noise that correspond to the signal structure of LP-WAN packets. Different from prior work that only looks for these patterns in the preamble (i.e. the beginning) of LP-WAN transmissions, our solution scans the entire packet resulting in greater accuracy.

We further improve our methodology by letting base stations collaboratively share news about packet detection. For instance, if a weak signal from a transmitter is detected by the base station, it alerts its neighbors to transmit signals received at about the same time to the cloud.

Our experiments revealed significant improvements in the range of LP-WANs by a factor of 3x through a wide-area demonstration at Pittsburgh. [That work received the best paper award at ACM/IEEE IPSN 2018 [2] – a major international conference.]

Beyond physical range, LP-WANs also need to perform at massive scale.  ITU has set lofty goals for mMTM communications of as many as a million devices per square kilometer. At these massive scales, LP-WAN devices are likely to interfere with each other rampantly, causing massive data loss.

In part, this is because inexpensive and battery-hungry devices traditionally do not take the classic “listen before you transmit” approach to take turns and therefore lack a mechanism to realize that they are producing interference.

Our solution to address this challenge of rampant interference in LP-WANs at scale turns the low cost of LP-WAN hardware to our advantage. Specifically, we observe that the transmissions from cheap LP-WAN devices often have unique imperfections, such as shifts in frequency or time, depending on hardware manufacturing defects. These defects can then be used as filters to separate signals from multiple devices that interfere with each other.

Given the traditionally narrow bandwidth of LP-WANs, this approach allows us to massively scale up the number of devices that can concurrently transmit. Our paper in SIGCOMM 2017 reports an overall 6-fold improvement in the scale of LP-WAN networks compared to the state-of-the-art.

Perhaps the most important requirement of LP-WANs is the need to maximize battery-life. A key selling point of LP-WAN is the ten-year battery life that allows for most consumers of IoT devices to simply not worry about maintenance or recharging of batteries through the lifetime of the device.

Our research has shown that this battery-life cannot be taken for granted, even if the devices are installed statically at a fixed location for the duration of its life. For instance, our work in NSDI 2020 [5] has shown that carefully selecting the frequency of operation of a device can substantially improve the battery life of a device, by 230%, rather than choosing a default frequency.

We presented a method and mechanism to intelligently configure LP-WAN devices using intelligence at the cloud, without requiring any advanced computation at the devices themselves, barring the occasional transmission of a beacon packet. Our award-winning paper at IPSN 2020 [3] also showed how teams of individually wimpy LP-WAN devices can collectively convey useful information without draining the battery of each device significantly.

More importantly, such information can be conveyed very quickly within the duration of one LP-WAN packet to then be processed by machine learning algorithms running on cloud resident compute servers. We showed how such a system could have wide-ranging applications from diagnosis of faults in sensor networks to rapid and large-scale spatial tracking of wildfires.

The Future of IoT is in the services it enables:

While much of our research to date has focussed on delivering the energy consumption and communication performance that LP-WANs promise, we believe that LP-WANs can play a pivotal role in shaping the applications that IoT will enable in the future.

Imagine, a postage-stamp sized device that can be used to track the physical location of packages deployed anywhere in the world. Consider how swarms of IoT devices deployed in the city can collectively measure and model vibrations from earthquakes.

Funded by the prestigious CAREER award from the National Science Foundation, we at the CMU WiTech lab are currently working on intelligently processing LP-WAN signals in the cloud to take a step toward these applications and beyond. We are further devising mechanisms to improve the security and privacy of user data in a world where IoT devices are everywhere around you.

More broadly, we believe that next-generation cellular networks, beyond serving as communication pipes, have the potential to actively shape the applications of the future in the emerging IoT era.

Dr. Kumar received the George Sprowls Award for best Ph.D thesis in Computer Science at MIT and the President of India gold medal at IIT Madras. Photo of Swarun Kumar, PhD and Assistant Professor at CMU