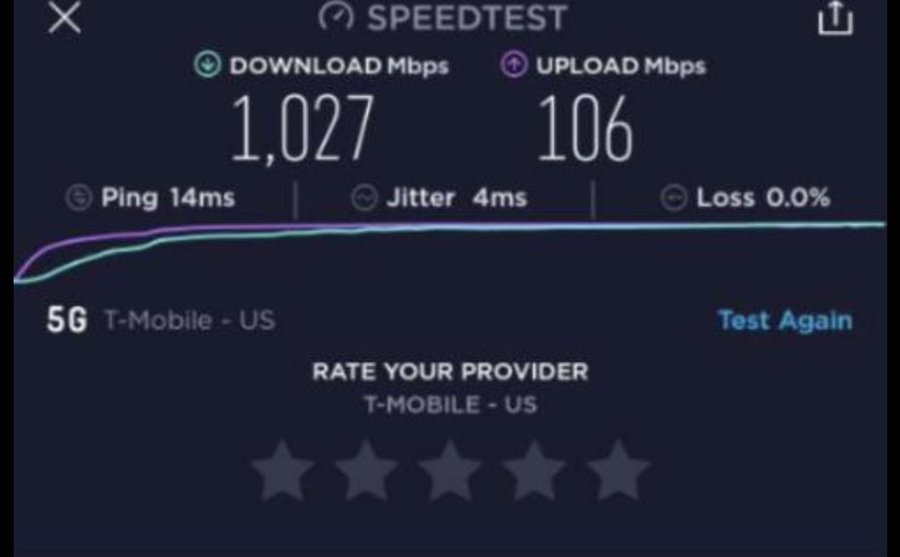 Previously, T-Mobile had boasted speeds of around 600Mbit/s on its 5G network in Philadelphia, which uses the operator’s lowband 600MHz spectrum and the midband 2.5GHz spectrum T-Mobile acquired from Sprint.
T-Mobile’s 1Gig connection was obtained in a single test.  It is not necessarily a speed customers should routinely expect as it used combined transmissions across several different frequency bands:

Therefore, the operator’s 1Gbit/s 5G connection didn’t even make use of T-Mobile’s low-band or high-band, mmWave spectrum holdings. Moreover, T-Mobile officials have said the operator is initially deploying only 60MHz of the roughly 150MHz it now owns in the 2.5GHz band. The inclusion of transmissions in those additional bands would undoubtedly increase users’ download speeds.

The time that users spent connected to 5G — 5G Availability — also varied greatly between operators, reaching a high of 19.8% of the time on T-Mobile US, indicating that while T-Mobile 5G speeds may not be the fastest, their users will experience the higher 5G speeds considerably more often than the users of other 5G operators.
Of the ten operators we analyzed, Verizon is the only one to exclusively use mmWave spectrum and this is the main reason for the extremely high speeds our 5G users have observed on its network. Similarly, the two operators here whose users had the slowest 5G speeds both primarily relied upon low-band spectrum re-purposed from 4G services — 600Mhz for T-Mobile US and 850Mhz for AT&T — which offers extremely good coverage but less capacity and slower average speeds. All the other operators relied on mid-band spectrum for their 5G services.

Although Australia’s Telstra, all three of South Korea’s operators, Sprint in the U.S. and the U.K.’s EE and Vodafone have all deployed 5G on mid-band spectrum, users’ speeds differed greatly from well over 200 Mbps on all three Korean operators, to 114.2 Mbps on Sprint. In part, this speed difference is because of the amount of 5G spectrum available to deploy — wider channels are better, ideally 100Mhz in a single 5G band — but it’s also due to other differences in the networks such as the capacity of the onward connection from each cell site or the performance of each operator’s core network.

As the new T-Mobile combines the assets of Sprint, we expect to see the average 5G speed of new T-Mobile users rising as they benefit from the mid-band 5G spectrum which Sprint has deployed.

While the average 5G speed varies dramatically across these ten leading 5G operators, in every case the 5G Download Speed Experience is dramatically faster than 4G. The operator whose users experienced the fastest 4G download speed, SK telecom, still saw 5G speeds 3.5 times faster.
………………………………………………………………………………………………………………………………………….
Finally, Nokia announced on Tuesday that it has achieved the world’s fastest 5G speeds in its Over-the-Air (OTA) network in Dallas, Texas. Utilizing 800 MHz of commercial millimeter wave 5G spectrum and Dual Connectivity (EN-DC) functionality, Nokia achieved 5G speeds of up to 4.7 Gbps in tests performed on base station equipment being deployed in major U.S. carriers’ commercial networks. This solution will not only provide subscribers with unrivalled mobile broadband speeds, but also enable carriers to sell various latency-sensitive enterprise services, such as network slicing for mission-critical applications.

The record speed was achieved by combining eight 100 MHz channels of millimeter wave spectrum on the 28 GHz and 39GHz bands, providing 800 MHz of bandwidth, and 40 MHz of LTE spectrum using the EN-DC functionality available on Nokia’s AirScale solution. EN-DC allows devices to connect simultaneously to 5G and LTE networks, transmitting and receiving data across both air-interface technologies. This means devices can achieve a higher throughput than when connecting to 5G or LTE alone. The speeds were achieved on both 5G cloud-based (vRAN) and classic baseband configurations.

Stéphane Téral, Chief Analyst at LightCounting Market Research, said: “This is a substantial achievement that reflects the careful workings of a brilliant and subtle team with the deepest appreciation for detail and circumstance. In other words, 8-component carrier aggregation in the millimeter wave domain shows the world that there is more than massive MIMO and open RAN to not only truly deliver the promise of commercial 5G, but also pave the way for future Terahertz system.”

Tommi Uitto, President of Mobile Networks at Nokia, commented: “This is an important and significant milestone in the development of 5G services in the U.S., particularly at a time when connectivity and capacity is so crucial. It demonstrates the confidence operators have in our global end-to-end portfolio and the progress we have made to deliver the best possible 5G experiences to customers. We already supply our mmWave radios to all of the major U.S. carriers and we look forward to continuing to work closely with them moving forward.”