Our esteemed colleague Craig Moffett of MoffettNathanson says that the wireless market is now growing fast enough for both telcos and cablecos to meet their expectations.  However, longer term growth that’s much above population growth is clearly unsustainable.

The market research firm has long argued that above-population phone growth in a more or less fully penetrated
market owes to the industry’s willingness to give away free phones in return for additional lines, even when those additional lines aren’t needed and won’t be used.

MoffettNathanson had earlier reported that it expects cablecos to continue to take wireless market share from telcos, bolstered by what is now much more competitive pricing from Comcast.

Craig wrote in a note to clients [we recommend you become one if not truly interested in telecom and/or cable]:

That leaves AT&T and Verizon to bear the brunt of the impact. AT&T has been growing its market share of late, but only because Verizon had been slow to match their aggressive retention offer. Now that Verizon has finally introduced its own, similar, retention offer, the two are likely to be in closer equilibrium… …which is to say, we believe they are likely to now both lose equally. Both companies have guided to low-single digit consolidated revenue growth in the near term, accelerating to the mid-single digits over the coming years.

With continued contraction in the Business Wireline segment all but a given, that means growth in wireless will have to be even faster than that. How? Their guidance seems awfully optimistic to us. We are also projecting significant losses for prepaid as low-priced post-paid plans accelerate pre-paid to post-paid conversions. 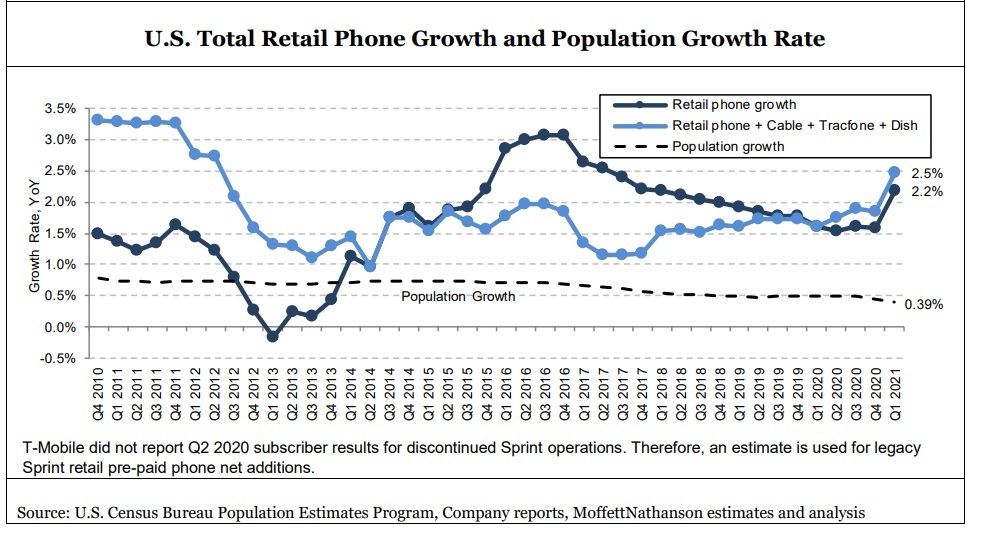 Moffett’s revised estimates are for mobile phone subscriber net additions to drop from about 6 million this year to approximately 4.5 million per year in the next few years. That works out to 5.8 million postpaid net adds vs. a loss of 1.3 million prepaid subscribers.

Moreover, the phone subscriber loss for mobile telcos will become more acute if the growth rate recedes from a recent increase of 2.5% year-over-year (a number five times higher than population growth), to more moderate levels – down to about 1.4% by 2025, according to Moffett’s forecast. 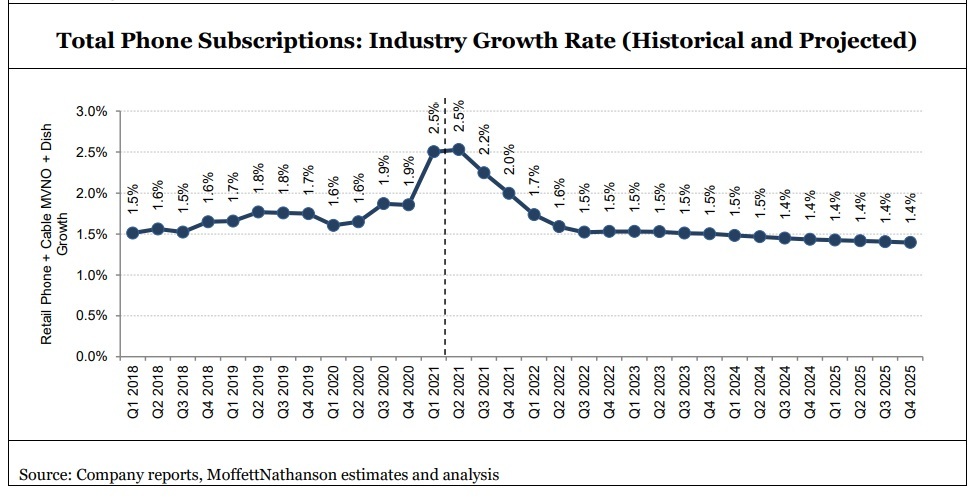 Moffett has significantly lowered his estimates for postpaid phone net adds for both AT&T and Verizon. T-Mobile’s sub growth will slow to a smaller degree, reflecting “greater competition from cable operators,” Moffett wrote.

Ahead of its national 5G network build, Dish Network remains largely a prepaid operator following its acquisiton of the Boost business from T-Mobile, along with a mix of pre- and post-paid subs coming from last year’s Ting deal. Moffett expects to see a faster decline at Dish’s Boost prepaid business as the company prepared to “compete more vigorously in post-paid.”

The wireless industry hasn’t grown mid-single digits in years, and, with competitive intensity rising, there is little reason to expect that to change. Unfortunately, MoffettNathanson is skeptical (to say the least) that 5G will create incremental revenue streams that fundamentally alter the industry’s growth trajectory. [1.]

Note 1.  With URLLC performance requirements not met by either 3GPP Release 16 or IMT 2020 (M.2150), no ITU standard or 3GPP implementation spec for 5G SA core network (which is required for all 5G features like network slicing), no 5G SA roaming, and no ITU-R agreement on 5G mmWave frequencies (revision to M.1036 companion recommendation for M.2150), we think there are very few legitimate use cases for 5G at this time.  Furthermore, the network build out costs, especially for hundreds of thousands of small cells with fiber backhaul) will overwhelm any revenue increases and result in a net LOSS for almost all wireless telcos that deploy 5G SA (T-Mobile may be an exception for many reasons).

And if AT&T and Verizon are both going to be share losers – this seems to us to be a relatively non-controversial assertion – in an industry that barely grows, then how on earth will they achieve faster than mid-single digit growth?

In sum, our calculation suggests industry phone growth – again, to be clear, this is before the minting of unneeded and unused additional lines – should be about 1.2% per year.

With Cablecos taking a bite out of that smaller pie, Craig expects growth of incumbent telco’s  – AT&T and Verizon, in particular – to suffer.

3 thoughts on “MoffettNathanson: AT&T, Verizon set to lose wireless market share to Cablecos; 5G to disappoint – no real use cases”