Comment: That’s great progress for a company that filed for bankruptcy in April 2020 with a plan to cut more than $10 billion of its $17 billion debt load by handing ownership to bondholders. It was the biggest telecom filing since WorldCom in 2002, reflecting years of decline in its business of providing internet, TV and phone service in 29 states.

“We’ve managed through supply chain constraints and been able to perform very well in our fiber build and continue to ramp that up for 2022,” he said. 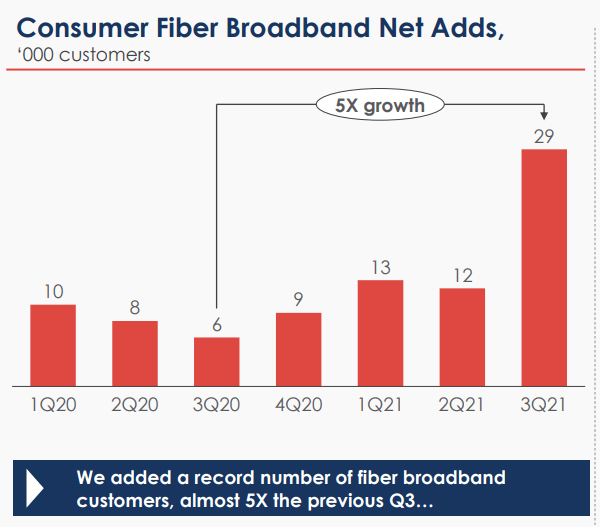 Frontier has completed ‘wave 1’ of this fiber expansion.  The company is now beginning ‘wave 2,’ which will take them through 2025, getting them to 6 million new locations. Build costs in wave 2 are a bit higher at $900 to $1,000 per fiber location.

Frontier envisions a ‘wave 3’ coming, but that’s outside the scope of their current committed-to fiber build. Beasley says Frontier will look to leverage government funding programs and other partnerships to help fund wave 3 fiber builds.

“There could be scenarios where we accelerate the build of some locations in wave 3 into wave 2,’ he said in discussing Frontier broadband growth. “That will likely be a destination of significant government funding as the roughly $45 billion of infrastructure bill funding that goes to broadband will be targeted at locations like wave 3.”

Asked about potential competition from fixed wireless access (FWA) and satellite broadband services, Beasley said neither presents a material threat just yet. While FWA may gain traction in some ultra-dense urban locations and satellite in extremely rural areas, Beasley asserted neither technology will be able to stand up against Frontier’s gigabit fiber offerings. The company already offers 1 Gbps and is planning the rollout of a 2 Gbps plan in the first half of this year as well as a 10 Gbps tier somewhere down the line.  “It’s a technology we’re watching closely but don’t think it can compete with our core symmetrical speeds in fiber,” Beasley said of FWA.

“Against our core gigabit plus offers, 1 gig symmetrical speeds now, we’ve said we’re going to launch 2 gig in the first half of 2022, eventually we’ll move to 10 gig, the core network is 10 gig capable now, we’ve trialed 25 gig successfully in certain parts of the network,” he said. “I don’t think fixed wireless has the capacity to compete with that core infrastructure. It will be competitive in certain niches of the market…but I don’t think it can compete with our core symmetrical speeds and fiber,” he added.