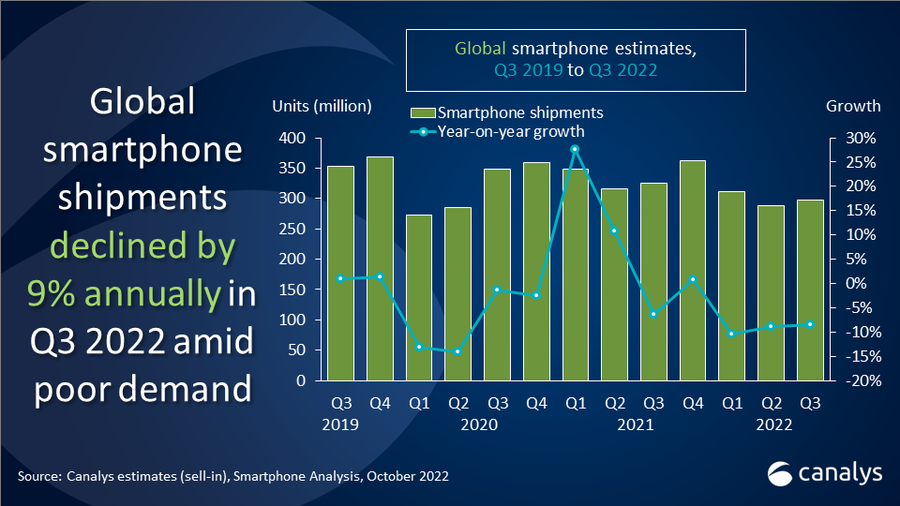 “Performance of the high-end segment was the only highlight this quarter,” said Canalys Research Analyst Runar Bjørhovde. “Apple reached its highest Q3 market share yet, driven by both the iPhone 13 and newly launched iPhone 14 series. The popularity of the iPhone 14 Pro and Pro Max, in particular, will contribute to a higher ASP and stable revenue for Apple. On the Android side, Samsung refreshed its foldable portfolio and increased its marketing initiatives significantly to generate interest and demand for its new flagships. Mid-to-low-end demand has been hit making it challenging for vendors to navigate in a competitive segment. Xiaomi managed to leverage its global scale with a refreshed product line to offset declines in its home market. OPPO and vivo are still significantly impacted by the drop in the China market but have both shown small signs of recovery.”

“Europe and Asia Pacific outperformed the rest of the world in Q3,” said Canalys Analyst Sanyam Chaurasia. “Europe avoided a significant drop helped by a spike in shipments to Russia. Here, Chinese vendors leveraged short-term opportunities to stock up the channel in a market that has been undersupplied during previous quarters. APAC had a huge variation between different markets, but sequentially improving demand in India, Indonesia and the Philippines helped the region stabilize its performance. Carrier dominated markets such as North America and Latin America presented increasingly cautious sentiments on managing inventory before heading into big holiday seasons, contrasting a much more optimistic view in Q3 last year.”

“Moving into Q4, ongoing global disruptions are hampering the performance of entire ecosystem portfolios for vendors,” said Canalys Analyst Toby Zhu. “The upstream supply chain is entering a long winter sooner than expected where OEMs’ order targets are slashed heavily. Also, slow inventory turnover and poor economic figures have affected the channel’s confidence, falling back to major brands with iconic devices to generate traffic for the most important revenue quarter. Vendors are entering Q4 with cautious strategies to handle the persisting difficulties. Managing the gloomiest Q4 outlook in over a decade will show which vendors are well-positioned for the long-term.”

Senior Analyst Harmeet Singh Walia said, “Most major vendors continued experiencing annual shipment declines in the third quarter of 2022. Russia’s escalating war in Ukraine, ongoing China-US political distrust and tensions, growing inflationary pressures across regions, a growing fear of recession, and weakening national currencies all caused a further dent in consumer sentiment, hitting already weakened demand. This is also adding to a slow but sustained lengthening of smartphone replacement cycles with smartphones becoming more durable and as technology advancement slows. This is accompanying, and to a smaller degree advancing, a fall in the shipments of mid- and lower-end smartphones, even as the premium segment weathers the economic storm better. Consequently, and thanks to an earlier launch of the latest iPhone series this year, Apple emerged as the only top-five smartphone vendor to manage annual shipment growth in the quarter.”

While Samsung grew QoQ in Q3 2022 thanks to record presales of its premium fold and flip smartphones, compared with the same quarter last year, however, its shipments fell by 8% YoY. This is primarily down to dampening consumer sentiment in several of its key markets. This also affected top Chinese brands, whose shipments remained low compared with last year as they were getting rid of excess inventory and at the same time managing a slowdown in the home market, China. However, they were able to capitalise on Apple and Samsung’s exit from the Russian market, in which their share increased substantially.

Associate Director Jan Stryjak noted, “With the full force of the latest iPhone launch being felt in Q4, we expect further quarterly improvement in the coming quarter, although central banks’ attempts to control inflation will further reduce consumer demand. The channel inventory is still higher, and the OEMs will focus on getting rid of excess inventory in Q4 as well. Hence, shipments are unlikely to reach last year’s levels, let alone pre-pandemic Q4 levels of over 400 million units. Looking further ahead into 2023, we expect sluggish demand with lengthening replacement rates, especially in the first half of the year.”