Among the megatrends driving the technology industry, cloud computing has been a major force.  But for the first time in its brief history, the cloud has grown stormy as third-quarter cloud giant earnings details made very clear:

Note: We don’t consider Facebook/Meta Platforms a cloud service provider, even though they build the IT infrastructure for their cloud resident data centers.  They are first and foremost a social network provider that’s now desperately trying to create a market for the Metaverse, which really does not exist and may never be!

In late October, Synergy Research reported that Amazon, Microsoft and Google combined had a 66% share of the worldwide cloud services market in the 3rd quarter, up from 61% a year ago. Alibaba and IBM placed fourth and fifth, respectively according to Synergy. In aggregate, all cloud service providers excluding the big three have tripled their revenues since late 2017, yet their collective market share has plunged from 50% to 34% as their growth rates remain far below the market leaders. In 2022, capital spending on internet data centers by the three big cloud computing companies will jump a healthy 25% to $74 billion, estimates Dell’Oro Group.  In 2023, spending on warehouse-size data centers packed with computer servers and data storage gear is expected to slow. Dell’Oro puts growth at just 7%, which would take the market up to $79 billion.

Oppenheimer’s Horan wrote, “Cloud providers remain very bullish on long-term trends, but investors have been surprised at how economically sensitive the sector is. “Sales cycles in cloud services have elongated and customers are looking to cut cloud spending by becoming more efficient.  Despite the deceleration, cloud is now a $160 billion-plus industry. But investors will be concerned given this is our first real cloud recession, which makes forecasts difficult.”

“This macro slowdown clearly will impact all aspects of tech spending over the next 12 to 18 months. Cloud spending is not immune to the dark macro backdrop as seen during earnings season over the past few weeks,” Wedbush analyst Daniel Ives told Investor’s Business Daily via an email.  “That said, we estimate 45% of workloads have moved to the cloud globally and (the share is) poised to hit 70% by 2025 in a massive $1 trillion shift. Enterprises will aggressively push to the cloud and we do not believe this near-term period takes that broader thesis off course.  The near-term environment is more of a speed bump rather than a brick wall on the cloud transformation underway. Microsoft, Amazon, Google, IBM (IBM) and Oracle (ORCL) will be clear beneficiaries of this cloud shift over the coming years and will power through this Category 5 (hurricane) economic storm.”

Bank of America expects a boost from next-generation cloud services that cater to “edge computing.”  Amazon, Microsoft and Google are “treating the edge as an extension of their public cloud,” said a BofA report. The giant cloud computing companies have all partnered with telecom firms AT&T (T), Verizon (VZ) and T-Mobile US (TMUS).  Their aim to embed their cloud services within 5G wireless networks. “Telcos are leveraging the hyperscale cloud to launch their own edge compute businesses,” BofA said.

“We think many organizations accelerated the journey to the cloud as Covid and hybrid work requirements exposed weaknesses in existing on-premise IT capabilities,” Bachman said in a note. “While spend remains healthy in the cloud category, growth has decelerated for the past few quarters. We believe economic forces are at work as well as a slower pace of cloud migrations post-Covid.”

Market research heavyweight Gartner updated its global cloud computing growth forecast Oct. 31. The new forecast was completed before third-quarter earnings were released by Amazon, Microsoft and Google. Gartner forecasted worldwide end-user spending on public cloud services will grow 20.7% in 2023 to $591.8 billion. That’s up from 18.8% growth in 2022.

In a press release, Gartner analyst Sid Nag cautioned: “Organizations can only spend what they have. Cloud spending could decrease if overall IT budgets shrink, given that cloud continues to be the largest chunk of IT spend and proportionate budget growth. 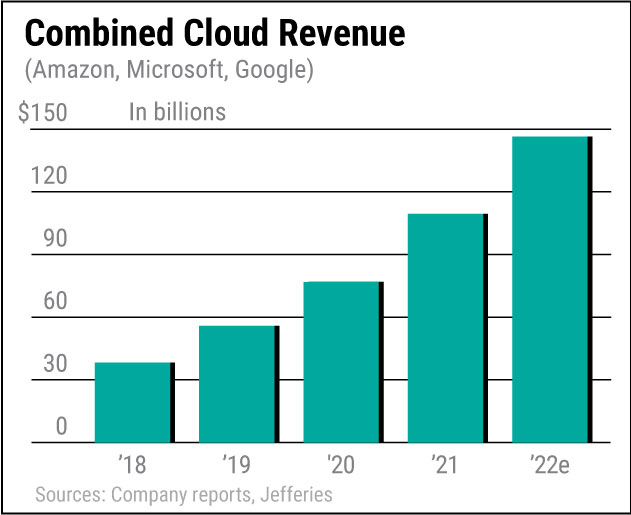 AWS, Microsoft Azure and Google’s cloud computing units are all growing at an above-industry-average rate. Still, AWS and Azure are slowing, perhaps a bit due to size as well as the economy.

“We see a temporary slowdown in bringing new workloads to the cloud, though importantly not a change in organizations’ long-term cloud ambitions. The near-term forces of optimization can obscure what we believe remain very supportive underlying trends. We remain confident that we are in the early innings of a generational shift to cloud.”