Charlie Ergen, Dish Co-Founder and Chairman of the Board, added that there’s a lot of excitement about O-RAN radios and the path that Dish is taking there.  He said that Mavenir is doing some of the software for the baseband distribution unit and that VMware enables Dish to “stitch together the cloud” with its 5G O-RAN based network.  Containers and micro services are being used in this implementation, but exactly how was not revealed or discussed.

“But when you put all that together, you got to make it work and you got to make it work on different cloud providers and private clouds, and VMware allows us to horizontally go across the stack and stitch that stuff together. And the way we look at partnerships, VMware has done a lot of work for us already even before we signed the contract with them.

They’re learning a lot about Telco and O-RAN and so they’re getting a real R&D sandbox to play in and they’re making our business better and we’re making their business better. So it’s a really, really good win-win for both companies and they’ve been a tremendous vendor even before we signed a contract with them.

So the big picture thing is there is nothing — there is nothing that stops us from building really the best network in the United States. There is no law of physics — there’s no law of physics, there is no technology that really hasn’t changed. It’s really execution. It’s really execution risk for us and our vendors to make it happen. But we’re not reinventing science, we’re not reinventing anything. We’re just taking really good cloud providers and software providers and making what has been a very clunky, hardware-centered highly operational cost environment, very similar to data centers 20 to 30 years ago.

We’re going to make it (5G O-RAN) into a modern network. So everything exists to do that. And we’re just going to go do it. We don’t spend a lot of time talking about it externally because everybody is going to be skeptical up until we light it up and then people will have their opinion about it. So that’s what we’re going to do.”

Earlier this week, Dish acquired Ting Mobile and announced a partnership with Tucows on technology services.  The company acquired T-Mobile assets including customer relationships and the brand in order to support Ting Mobile customers.

Dish closed the Boost Mobile acquisition (from T-Mo, but actually it was owned by Sprint) on July 1st and will report Boost results for the first time in the third quarter.  The company will report Boost results in their Wireless segment and will disclose key metrics such as ARPU and subscriber data at that time.  As part of the T-Mo/Sprint merger, Dish also acquired $3.6 billion of 800 MHz spectrum, which was Sprint’s entire 800 MHz spectrum holdings.

Craig Moffett of MoffettNathanson had this comment about Dish’s wireless business:

“Yes, they’ve chosen VMware and few other vendors. And small, private tower operators report some Dish activity – Dish sensibly seems to be focusing on smaller towercos first, as the majors will have more negotiating leverage and will therefore drive a harder bargain. And, sure, they’ve now bought Ting, a small operator to augment their Boost business (these pre-paid businesses were acquired after the end of the just-reported second quarter).

Nor have they changed their longer term guidance of $10B to build a virtualized network, a number that we no longer have to caveat by saying we don’t believe.

Save for some slowly escalating wireless spending as they continue to gradually hire the people they’ll need to run the business – although even that is going far more slowly than one would expect – we’re left with a satellite business, and only a satellite business (OK, also an OTT business) in Q2 results.”

Craig, along with many analysts (including this author) believe Dish could take steps to unlock value by selling some or all of its significant spectrum assets.  Dish has a long history of buying spectrum and doing nothing with it. As FierceWireless wrote last year, “Dish has spent roughly $20 billion over the past decade to amass a significant spectrum portfolio, and has roughly 95 MHz of low-band and mid-band spectrum per market.”  That was before Dish bought Sprint’s entire 800 MHz (low band) spectrum assets, which are not included in this graph: 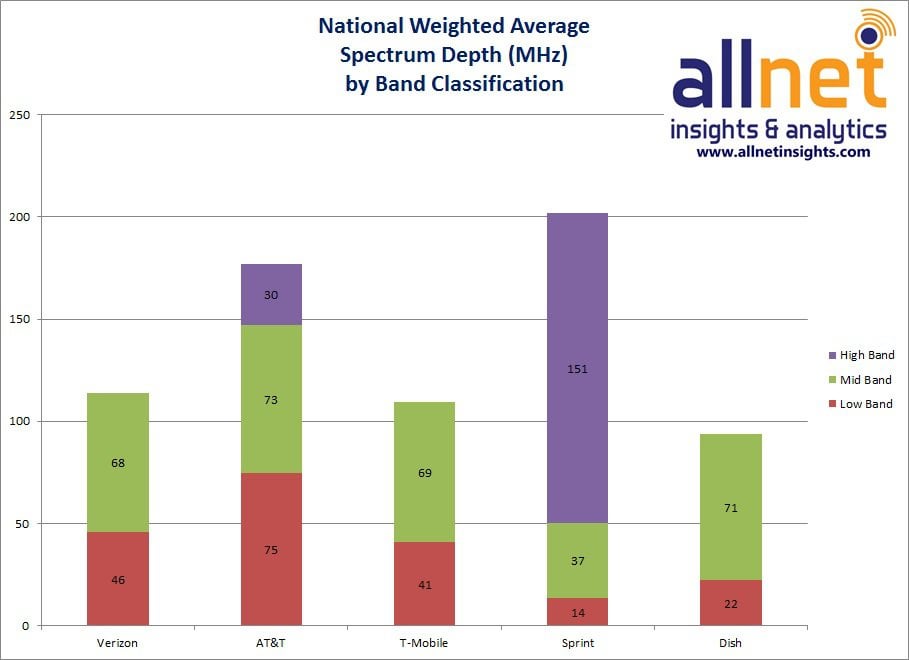 Dish has promised the FCC that it “will deploy a facilities-based 5G broadband network capable of serving 70% of the US population by June 2023 and has requested that its spectrum licenses be modified to reflect those commitments.” Dish would have to pay fines of up to $2.2 billion if it fails to meet its 5G deployment deadlines.

Dish Network’s massive bet on deploying wireless spectrum it owns overshadows its declining cash-cow satellite television business. Dish reported a net loss of 40,000 net satellite television customers, half the figure a year ago as far fewer accounts deactivated service. The firm’s customer base likely skews towards customers that place less value on live sports and more on news coverage, which has delivered strong ratings during the pandemic and protests. Dish also lost (net) 56,000 Sling customers, better than the 281,000 lost the prior quarter, which had come following a large price increase at the start of the year. Price increases fueled a 7% year-over-year increase in average revenue per customer, roughly offsetting customer losses as total revenue declined 0.8%.

Moreover, Dish isn’t likely to become a full-fledged nationwide wireless network competitor, because Dish’s plan is only to cover 70 percent of the US population by June 2023. That could leave 100 million Americans without the option of a fourth wireless carrier (behind Verizon, AT&T, and the new T-Mo).  Finally, the whole O-RAN concept is unproven with no liaison arrangements between the ITU or 3GPP and either of the two O-RAN spec writing entities – the O-RAN Alliance (which Dish is implementing) and the TIP Open RAN project.

Dish’s plan of covering 70 percent of the 327 million people in the U.S. isn’t impressive compared to the major carriers’ current 4G LTE coverage, which is important because carriers admit that 5G won’t be much faster than 4G in rural areas where millimeter-wave deployments aren’t viable. Outside densely populated areas, Verizon says that 5G speeds will merely be like “good 4G.”

We are also of the opinion, that Dish’s physical 5G deployment costs will be much more than Dish has budgeted and can not be financed without Dish having to borrow significant amounts of money from the credit markets or partner companies..