According to Taiwan based market research firm TrendForce, the big three China and European telecom equipment manufacturers captured more than 85% market share in the global mobile base station industry in 2019, with Sweden-based Ericsson, China-based Huawei, and Finland-based Nokia as the three largest suppliers. However, owing to the U.S.-China trade war and the export controls issued by the U.S. government, Huawei subsequently was unable to procure key components from U.S.-based RF-front end manufacturers, in turn affecting the sales performance of its base stations in the overseas markets. As a result, Huawei is expected to focus its base station construction this year primarily in domestic China. 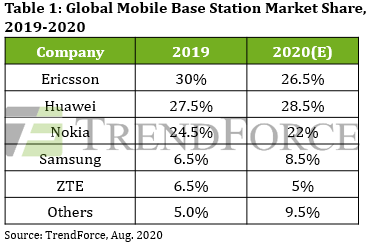 Total 5G base stations in China are projected to exceed 600,000 in 2020, while Japanese and Korean equipment manufacturers aggressively expand in the overseas markets.

By the end of 1st Half of 2020, the three major Chinese mobile network operators, including China Mobile, China Unicom, and China Telecom, had built more than 250,000 5G base stations in China. This number is projected to reach 600,000 by the end of this year, with network coverage in prefecture-level cities in China. In addition, emerging infrastructures such as 5G networks and all-optical networks will generate commercial opportunities for Huawei. According to the GSM Association’s forecasts, by 2025, more than a quarter of cellular devices in China will operate on 5G networks, occupying one-third of all global 5G connections.

On the other hand, thanks to successful 5G commercialization efforts in Korea, Samsung has seen a surge in its base station equipment. The company has provided base stations for the three major mobile network operators in Korea, including SKT, KT, and LG Uplus, in addition to collaborating with U.S. operators, such as AT&T, Sprint, and Verizon.

The UK government is now targeting Japan-based NEC and Fujitsu as Huawei replacement suppliers of 5G network equipment.  As European and the U.S. governments  have implemented sanctions against Huawei, Japanese equipment suppliers now have the perfect opportunity to raise their market shares in Europe and possibly in the U.S. (with upstart 5G network providers that adopt “OpenRAN.”  Throw in O-RAN Alliance members Mavenir, Parallel Wireless, Robin, Altiostar and Radisys into the mix and there may be serious competition for the big three base station vendors, especially OUTSIDE OF CHINA (where Huawei and ZTE will surely dominate).

by 海外风云 (courtesy of Yigang Cai)

How many 5G base stations will the future society need? If the transmission speed and coverage rate required by 5G are reached, the total number of base stations may exceed everyone’s imagination.

The electricity bill is equivalent to several hundred times the annual profit of China Unicom. Even if it only covers 1% of the country’s area, electricity bills can bankrupt the three major operators.

A typical 5G base station consumes up to twice or more the power of a 4G base station, writes MTN Consulting Chief Analyst Matt Walker in a new report entitled “Operators facing power cost crunch.”  And energy costs can grow even more at higher frequencies, due to a need for more antennas and a denser layer of small cells. Edge compute facilities needed to support local processing and new internet of things (IoT) services will also add to overall network power usage.  Exact estimates differ by source, but MTN says the industry consensus is that 5G will double to triple energy consumption for mobile operators, once networks scale.

The total number of 5G base stations must be dozens of times more than that of 4G to achieve high-speed coverage. 02 Why does 5G need so many base stations? Why do we need so much transmit power?

A basic principle of communication: the higher the transmission speed, the greater the signal-to-noise ratio can ensure accurate transmission. In other words, the more you need high-speed propagation, the more power and shorter distances you need.

In order to achieve faster speeds, we must use higher frequencies, above 10 GHz, or even 300 GHz (mmWave). The higher the frequency, the lower the wall penetration ability (implying line of sight required for correct signal reception).

2.4G Hz WiFi is already impenetrable through two walls, and higher frequency penetration is even worse. In order to ensure the signal strength, the power must be increased. In order not to be blocked by walls, many base stations must be densely placed in the cell to avoid being blocked by too many walls.

If you want to enjoy the high speed of the 5G era, you have to increase the number of base stations more than ten times or even hundreds of times. There is no choice. 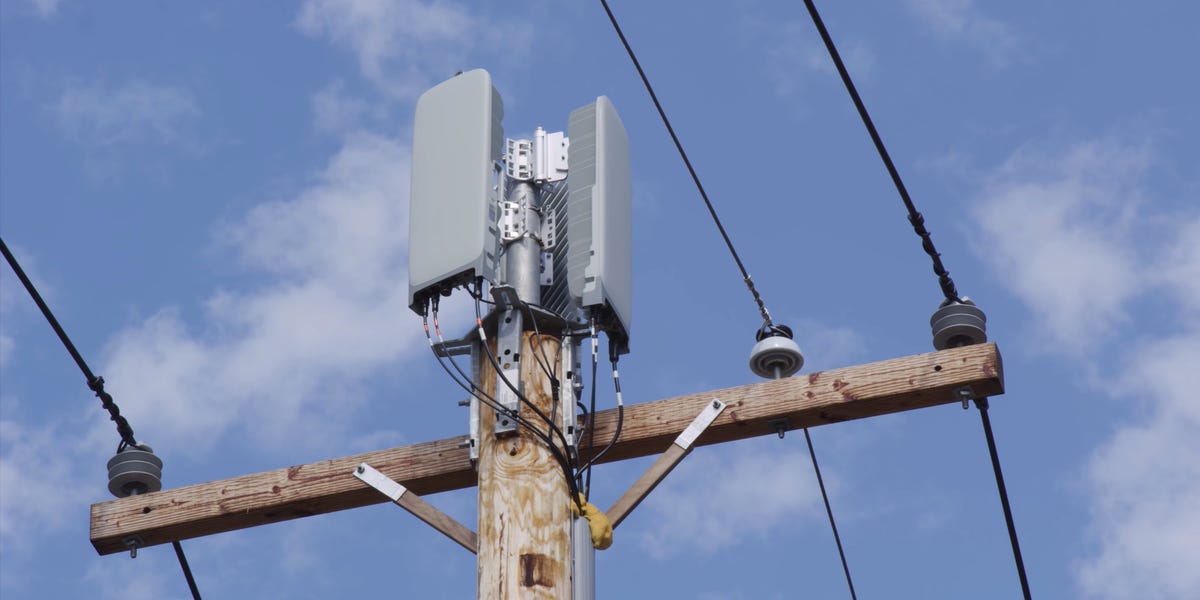 Early 5G Use Cases and Applications:

According to TrendForce’s latest investigations, 5G use cases have been in telemedicine and industrial IoT during the spread of COVID-19 in 2020.  Primary applications of 5G during this period include contactless disinfection robots, remote work, and distance learning.

Currently, China has been most aggressive in developing 5G networks, with more than 400 5G-related innovative applications in transportation, logistics, manufacturing, and health care in 1st Half of 2020. At the same time, the emergence of 5G services has created a corresponding surge in base station demand.

TrendForce research vice president Kelly Hsieh indicates that, from a technical perspective, the growth in mobile data consumption, low-latency applications (such as self-driving cars, remote surgeries, and smart manufacturing), and large-scale M2M (smart cities) requires an increase in 5G base stations for support. Constructing these base stations will likely bring various benefits, such as investment stability, value chain development, and interdisciplinary partnerships between the telecommunication industry and other industries.