IEEE 802.3c is titled: IEEE Standard for Ethernet – Amendment 5: Physical Layer Specifications and Management Parameters for 10 Mb/s Operation and Associated Power Delivery over a Single Balanced Pair of Conductors.” It defines the use of Single-Pair Ethernet (SPE) in many circumstances rather than a wide range of fieldbus cables, including RS‑485 twisted-pair, RG‑6 coaxial, and instrumentation cables.

“Applications such as those used in automotive and automation industries have begun the transition of legacy networks to Ethernet. This has generated an intrasystem control need for a 10 Mb/s solution which will operate over a single balanced pair of conductors. IEEE 802.3 does not currently support 10 Mb/s over a single balanced pair of conductors, and a reduction in the number of pairs of conductors and interface components required for 10 Mb/s Ethernet will provide a basis for an optimized solution in these applications.”

OT networks historically have been siloed from Ethernet-based IT networks and, “these networks, while operating effectively today, use dated, disparate network protocols. They are slow, typically 31.2kb/s, and require translation gateways to convert necessary data to Ethernet. SPE is purpose-built to address the challenges and topologies of OT networks,’ said Peter Jones, chair of the Ethernet Alliance and a distinguished engineer with Cisco.

“As the building- and industrial-automation industries come to rely more on SPE, there is a clear need to bring together the people creating and using the technologies so they can better understand one another,” said Jones.

“We are well positioned as a bridge between the OT experts in building and industrial automation and the IT (Information Technology) expertise that we have traditionally served across the Ethernet ecosystem.  This new Ethernet Alliance industry focus will work to align the many disparate stakeholders and, in turn, help the building- and industrial-automation industries get to where they want to go with Ethernet.”

One of the key roles that the Ethernet Alliance plays is supporting the deployment of Ethernet technologies into markets not traditionally served by Ethernet. OT networks, which control manufacturing processes or provide occupant comfort and safety in a building, historically have been siloed from Ethernet-based IT networks.

In the past, application of Ethernet in OT networks required adapting the network to work with normal 10 BASE-T Ethernet. It was effective but created  barriers, which limited adoption. SPE tears down those barriers, said Bob Voss, chair of the SPE subcommittee and a senior principal engineer with Panduit.

“SPE allows users to build the facilities served by OT networks in the ways they know work best; SPE is designed to support proven topologies and even uses a similar physical layer. Many SPE experts believe, given good cable health, that it could be possible to reuse physical-layer elements of current OT networks,” said Voss.

“We are excited about the Ethernet Alliance’s launch of an industry focus around building and industrial automation,” said Ron Zimmer, president and chief executive officer, Continental Automated Buildings Association (CABA).

“SPE is a promising technology for our industry, and CABA’s membership of leaders in advancing integrated home systems and building automation worldwide are committed to innovation that empowers connectivity among people, spaces and technology for a better tomorrow.”

Added Brett Lane, chief technical officer, Panduit: “The benefits SPE can bring to building and industrial automation are exciting. SPE is a vital next-generation technology which stands to help industry achieve better business outcomes through the continuation of convergence across the enterprise, and the Ethernet Alliance’s launch of this industry focus around OT networks is well timed.”

The Ethernet Alliance includes a variety of communications vendors, including Broadcom, Cisco, Dell, Juniper, Intel as well as university and industry members.  Here’s there 2020 Ethernet Roadmap and Applications: 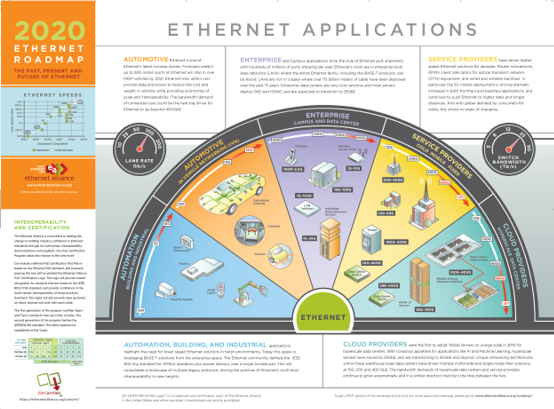 TSN is a collection of standards developed by the IEEE 802.1 TSN Working Group, which defines a new set of mechanisms for providing time synchronization and timeliness (deterministic data delivery) for time-sensitive data in a LAN shared with other types of best-effort applications, said Dave Cavalcanti, Avnu Alliance Wireless TSN Workgroup chair and a principal engineer at Intel.

IEEE 802.1 TSN standards define new functions for 802-based LANs such as traffic shaping, frame pre-emption, traffic scheduling, ingress policing, and seamless redundancy. When all parts of a network are running with the same sense of reference time, traffic can be coordinated based on a time-aware schedule, one method that allows for better control of latency for time-critical traffic. These new features provide a whole new layer of control for managing traffic over Ethernet, Cavalcanti said.

The charter of the IEEE 802.1 TSN Task Group is to provide deterministic services through IEEE 802 networks, i.e., guaranteed packet transport with bounded latency, low packet delay variation, and low packet loss. The TSN TG has been evolved from the former IEEE 802.1 Audio Video Bridging (AVB) TG. The TSN TG includes the former IEEE 802.1 Interworking TG. The original work on AVB was done as part of the “Residential Ethernet Study Group” of IEEE 802.3.

Base standards for TSN:

The TSN standards can be applied in many verticals. Some of them are listed in the application of TSN page.

According to Cavalcanti, the IEEE 802.1 TSN standards have seen a lot of growth in the past three to five years, particularly in the industrial market. TSN is a networking layer that leverages under-laying data communication technologies (such as Ethernet, 802.11/Wi-Fi and eventually 5G). As such, TSN can be seen as a unifying layer operating across and potentially integrating heterogeneous connectivity technologies. The role of TSN is to ensure the end-to-end data delivery with determinism, Cavalcanti said. “Each of the individual connectivity technologies may implement its own features to help achieve TSN goals, but TSN has a broader scope than any particular connectivity technology.”

Wireless communications using TSN not only enable mobility, they are flexible and reduce wiring costs. “TSN capabilities over wireless, for instance, can enable manufacturers to easily reconfigure industrial automation and control systems as well as enable optimized routing and utilization of mobile robots and automatic guided vehicles,” Cavalcanti added. Industrial automation system and mobile robots are important use cases because wireless is fundamental for mobility, flexibility and reconfigurability of tasks and routes.

“Electrical power grid systems are another interesting use-case for wireless TSN, as these systems have varied coverage areas which may vary from local (e.g. substation) to wide areas (distribution and transmission). Industrial control systems could also benefit from wireless connectivity, but they will require the highest level of determinism and reliability and rely exclusively on time-aware (IEEE 802.1Qbv) scheduling over wireless links,” Cavalcanti said.

The push for combining wireless and Ethernet TSN comes from the Avnu Alliance which says its members include more than 95% of the Ethernet silicon suppliers as well as automotive industry and audio-visual vendors.  Its affiliates include Cisco, Intel, Bose, Bosch, and Extreme. The Avnu Alliance defines requirements for interoperability and is the certification authority – grants certification for interoperable products – for TSN.

The Wireless TSN working group within Avnu Alliance states that “it is important to start early discussions and alignment on topics such as consistent TSN interfaces for wired and wireless technologies, interoperability testing, and certification efforts.”