The global smartphone market contracted 4 percent year on year (YoY), but grew 32% in 3Q-2020 to 365.6 million units. The market was negatively impacted by the Covid pandemic, according to the latest report from Counterpoint Research. The recovery was driven by pent-up demand in key markets such as the US, India and Latin America, said the report, adding that easing lockdown conditions worldwide also helped to streamline the supply chain again.

The quarter saw Xiaomi overtake Apple to capture the third spot for the first time with a 13 percent market share thanks to its highest-ever shipments of 46.2 million units in Q3. Xiaomi’s shipments were up 28 percent year on year and 35 percent compared to Q2 thanks to an impressive performance in China and rapid growth at Huawei’s expense in new markets like Latin America, Europe and the MEA.

Apple and Oppo rounded out the top 5 with market shares of 11 percent and 8 percent following third-quarter shipments of 41.7 and 31.0 million respectively. The biggest mover was Realme, with a sequential surge of 132 percent in shipments volume to rise to 7th spot thanks to a 4 percent market share, behind Vivo with 8 percent. The result means Realme became the world’s fastest brand to ship 50 million smartphone units since launching,  according to the report.

Research Analyst Abhilash Kumar said, “Xiaomi reached its highest-ever shipments at 46.2 million units in Q3 2020. In China, Xiaomi’s struggle for growth ended and shipments were up 28% YoY and 35% QoQ. This impressive show by Xiaomi in China was driven by a series of campaigns and promotions during the brand’s decennial celebrations in August. Also, in new markets like LATAM, Europe and the MEA, Xiaomi’s share expanded rapidly at the expense of Huawei amid US-China trade sanctions. The brand is also performing well in Southeast Asian markets like Indonesia, Philippines and Vietnam.”

Commenting on realme’s performance, Kumar said, “Accumulative shipments of realme smartphones reached over 50 million units in Q3; with this, it became the world’s fastest brand to hit 50 million shipments since inception, surpassing top players such as Samsung, Apple, Huawei and Xiaomi. In Q3, realme grew to become one of the top 5, or even top 3, brands in its key markets, including India, Indonesia, Bangladesh, Philippines and some other Southeast Asian countries. Having released a strong 5G smartphone portfolio during Q3, realme also achieved a remarkable growth in the China market (90% QoQ in terms of sales volume). With its efforts to bring the affordable yet premium-like products to consumers, as well as its ability to offer smooth digital shopping and after-sales services in different countries, realme has emerged as the most resilient brand during and after the pandemic crisis. Additionally, we see realme’s expansion beyond smartphones into the IoT space. Products like smartwatches, TWS and smart TVs will further help the brand strengthen its position in the global market.”

Separately, Canalys reported that worldwide smartphone shipments reached 348.0 million units in Q302020, at a 1% decline year on year. But they were up 22% on the previous quarter. Samsung regained the lead, up 2% to 80.2 million units. Huawei slipped into second place with a 23% fall to 51.7 million units. Xiaomi took third place for the first time, reaching 47.1 million units with 45% growth. Apple, which had no flagship iPhone launch in September, shipped 43.2 million, down 1%, while Vivo completed the top five, shipping 31.8 million units. Oppo came sixth, with 31.1 million units, while its sister brand Realme moved into seventh, its highest ever position, with 15.1 million units. Lenovo reported 10.2 million units, as it finally caught up with orders delayed due to disruption at its Wuhan factory, and Transsion shipped 8.4 million units as recovery started in its key African markets. 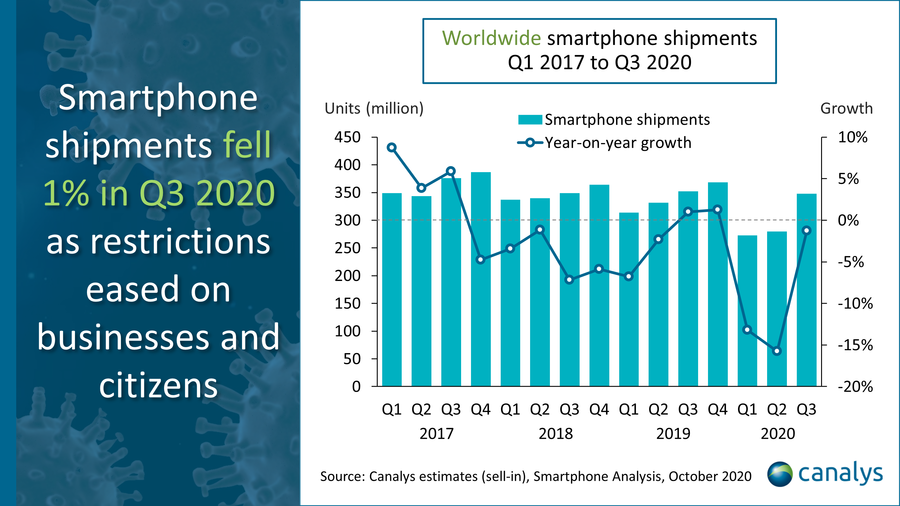 “Xiaomi executed with aggression to seize shipments from Huawei,” said Mo Jia, Analyst. “There was symmetry in Q3, as Xiaomi added 14.5 million units and Huawei lost 15.1 million. In Europe, a key battleground, Huawei’s shipments fell 25%, while Xiaomi’s grew 88%. Xiaomi took a risk setting high production targets, but this move paid off when it was able to fill channels in Q3 with high-volume devices, such as the Redmi 9 series. The vendor invested to bring in local expertise to gain the trust of distributors and carriers,” added Jia. “But it still faces competition from Oppo and Vivo, which have grown to cover a wide range of price bands in Southeast Asia, and are now driving into Europe too, where they are positioning as more premium options for carriers, and risk trapping Xiaomi at the low end. Realme is also becoming a serious contender, growing beyond ecommerce, and threatens to undercut Xiaomi as it transforms its go-to-market strategy.” 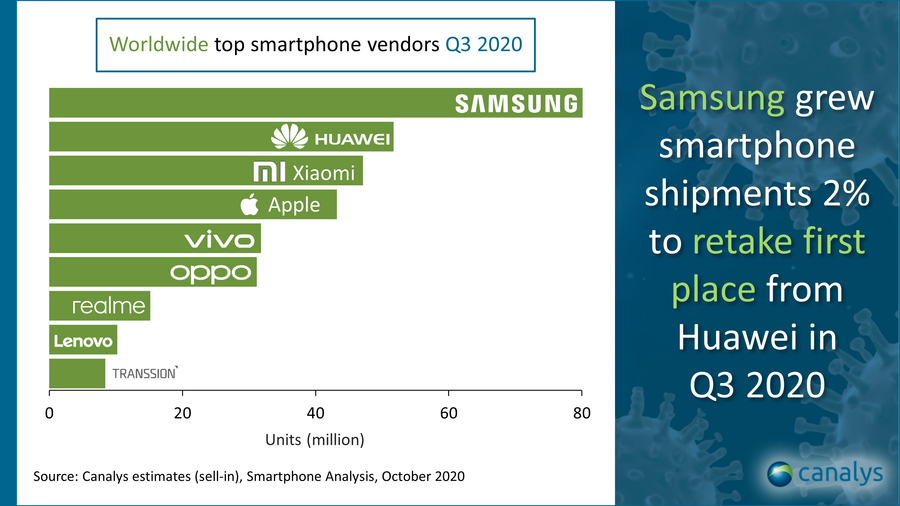 “Samsung suffered in Q2 due to its dependence on offline retail, but Q3 saw a major recovery,” said Canalys Analyst Shengtao Jin. “Its momentum was fueled by three key factors. Firstly, in many regions it saw pent-up demand from Q2 spill over into Q3. Secondly, it regained second place in India, as its Korean brand was shielded from anti-Chinese sentiment (see Canalys press release: India’s smartphone market rebounds in Q3 2020 to record high of 50 million). Thirdly, Samsung ramped up its launches of low-to-mid-range devices, and introduced other incentives, such as discounts and free online deliveries, to stimulate demand. Samsung is now positioning for more online sales as it launches exclusive online devices, such as the Galaxy F series for Flipkart. Despite its momentum, Samsung’s oversized portfolio is still the biggest pain point for the channel, which is reluctant to hand it more power.”

“This quarter was a welcome relief, with few restrictions on businesses and citizens between July and September,” said Ben Stanton, Senior Analyst. “But the ramifications of the first-half lockdowns still persist. Offline channels, for example, are being increasingly pared back, amid store closures and staff redundancies, and vendors now have to compete harder to attain floorspace. Limited supply of 4G chipsets will cause supply chain bottlenecks and increase production costs. Additionally, rising COVID-19 rates in regions such as Europe will soon force governments to bring back stricter nationwide measures. The second wave will stretch government stimulus budgets, and cause widespread bankruptcies and job losses in affected areas. Unfortunately, the relief of Q3 looks set to be short-lived.”