T-Mobile US 3rd quarter 2020 results, reported today, were highlighted by crossing the 100 million wireless “customer” milestone (more clarity below) after reporting record-high postpaid net subscriber additions that were nearly as much as the rest of the U.S. telco industry combined.  Controlled by Deutsche Telekom, T-Mobile reported third-quarter earnings of $1 per share, down a penny from $1.01 a share a year earlier. Including the merger with Sprint, pro-forma revenue rose 74% to $19.3 billion, the company said. The Sprint merger closed April 1st.

Since closing its merger with Sprint seven months ago, T-Mobile has been driving hard on integration including unifying employees and customers under one brand, rapidly improving the Sprint customer experience, and quickly rolling out 2.5 GHz spectrum to build the world’s best 5G network. Merger synergies are being realized faster than expected and the company expects to deliver more than $1.2 billion of synergies in 2020.

“Last quarter T-Mobile overtook AT&T to become #2 in U.S. wireless and today we announced our highest ever postpaid net adds. Now, with over 100 million wireless customers and America’s largest 5G network, there is no doubt that we’re the growth leader in wireless,” said Mike Sievert, T–Mobile CEO. “Customers are choosing T-Mobile in record numbers because we are the only ones that can deliver this combination of value and experience with a true 5G network that is available to customers in every single state! We’re consistently and profitably outpacing the competition – and we’re just getting started!”

The company also added 1.29 million devices other than phones to its network in the third quarter as school districts built out wireless hot spots to students during the coronavirus pandemic. The increased new wireless connections pushed T-Mobile’s total customer base to 100.4 million. T-Mo counts any wireless device with its own mobile identifier as a single customer.

Management also said that 15% of former Sprint traffic has been shifted over to the T-Mobile network. T-Mobile said its 5G network currently covers 270 million Americans. But that’s mostly on lower-frequency spectrum bands that meet the technical requirements of 5G but don’t deliver the full speed and capacity benefits the new technology promises. Sievert said Thursday that T-Mobile expects to have nationwide 5G coverage on the mid-band 2.5 GHz spectrum by the end of next year.

T-Mobile says they’re on a mission to build America’s best 5G network, offering all of the Un-carrier customers unrivalled coverage and capacity in every place that they live, work and play. The company has already been the first to launch a nationwide 5G network, first to launch standalone 5G (without a 5G core network implementation standard), and first to have 5G coverage in all 50 states and Puerto Rico. 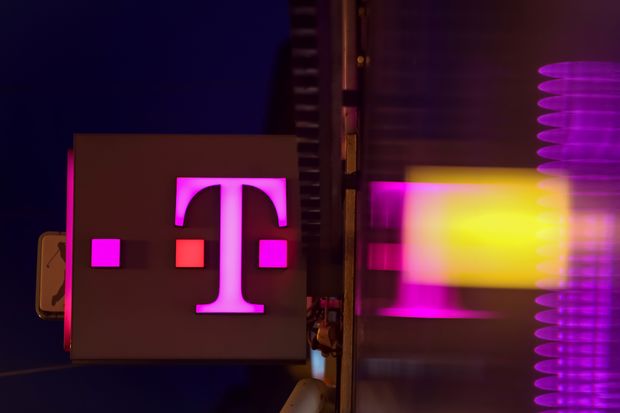 T-Mo marketing boss Matt Staneff said remote classes triggered a surge in demand for broadband connections, though the company only counted what it considered long-term accounts among the customer additions. School districts in California and New York were among the first to provide the cellular hot spots to students without enough internet bandwidth at home.  “We have the capacity in the network to handle all this traffic,” Mr. Staneff said. “The education system was caught off guard and will never want to be that way again.”

Regarding the wireless telco’s 5G leadership in the U.S., analyst Craig Moffett wrote:

T-Mobile, can benefit from 5G simply by taking market share (from AT&T and Sprint). T-Mobile’s 5G network will be the first to offer significant mid-band coverage, and therefore to deliver meaningfully higher-than-4G speeds, and that advantage is likely to last for years into the future. That advantage will matter most in precisely the segment in which T-Mobile under-indexes most: business wireless.

That T-Mobile is poised to be first in 5G is an extraordinary turn of events. When AT&T made its ill-fated bid to buy TMobile in 2011, T-Mobile was a distant fourth place network. Their 3G GSM network was fast, but coverage was poor, and they compensated with ultra-low prices. T-Mobile made huge strides towards closing that gap in the 4G era, but their position in business wireless still lags. Their prices have remained the industry’s lowest, and their urban speeds are often now the industry’s fastest, but their coverage map is just now catching up. In 5G, T-Mobile won’t just catch Verizon on network quality; we expect they will pass them by. Worst-to-first stories are rare. You don’t have to believe that 5G is “the next big thing” to believe that T-Mobile itself is, well, “the next big thing.”

When T-Mobile’s 2.5 GHz spectrum is more or less fully deployed, they will have 2.5 GHz-based 5G available to 100M pops (potential 5G subscribers- NOT traditional Point of Presence) by the end of 2020. By the end of 2021, T-Mobile’s 5G service will be genuinely differentiated.