On Ericsson’s 1st quarter 2021 earnings call this past week, CEO Börje Ekholm said that while Ericsson is focused on growing its core business of networks and digital and managed services, it’s also putting energy into building an enterprise business. The Swedish based company is “seeing a very strong development, strong demand for 5G and enterprise applications.”

The CEO believes that the 5G market cycle will be both longer and bigger due to entering a complete new application area with enterprise applications. What’s encouraging is the progress Ericsson is making on their product portfolio. In Q1-2021, the company announced the ultra-lightweight, high-performance Massive MIMO radio portfolio.

“We have continued to consolidate our position as market leader in 5G with 136 commercial contracts and 85 live networks in 42 countries. What’s also encouraging is that organically, FX-adjusted, we saw sales grew 10% during the first quarter. And if we actually add — or adjust for the IPR revenues, organic growth was 14% in our business. So that is really driven by a strong growth in networks that, again, if you would adjust for IPR, actually grew 19% in the quarter, which is fairly significant growth.

If we look at the market areas, we saw good growth in four out of five market areas. Northeast Asia, we grew by 80%, which is really driven by the non-Chinese markets, primarily. If we look at — the next one is Southeast Asia, Oceania, and India, where we saw good growth, driven by 5G in Australia, as well as 4G rollout in India, of a little touch more than 20%. Moving on to Europe, where we had good growth, 15% in Europe.But that was partly offset by more flattish development in Latin America. And, of course, Latin America suffers from the pandemic and the macroeconomic effects following the tough situation with the COVID-19. If we then look – MANA had a strong development based on continued rollout of 5G. And there, we see, actually, good progress also on our cloud-native portfolio in digital services.So we had a growth of 10% — more than 10% organically. And we’ve been able to also strengthen our market position, which is, long term, going to be very attractive for us. We also saw the completion of the C-band auction, so we expect that to result in deployments during the second half of the year. And if we look then at our last market area, Middle East and Africa, we saw sales falling by 16%.That is really an effect of the pandemic in Africa impacting the macroeconomic and the spend environment, but we’re also seeing a slowdown in Middle East following the large investments last year. So one of the cornerstones of our strategy has been to grow gross margin, and it’s a fundamental indicator of success or progress on the focus strategy. So it is encouraging that we continue to see our gross margin strengthen in the business, and we are able to see that strengthening despite lower IPR revenue. As a matter of fact, we fully compensate for the lower IPR revenue in the gross margin development.” 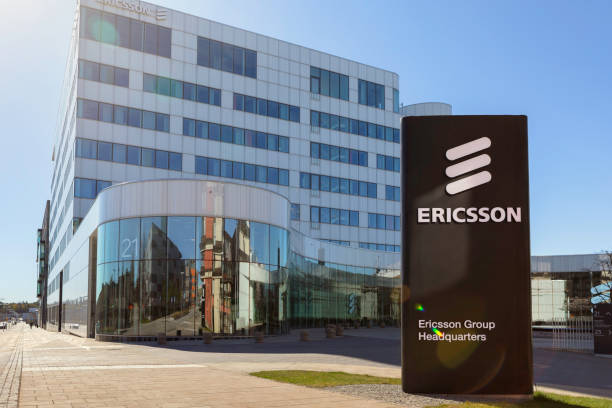 Ekholm also said that Ericsson is strengthening its position with Cloud RAN and has made their  supply chain resilient.  They continue to develop the Managed Services business growing gross margins by 20.6% in the quarter.  Ericsson’s cloud-native portfolio (5G stand alone based core network) strengthened and will be an increasing part of revenues in the near future.

In the enterprise market, Ericsson is starting to see good progress on its 5G IoT offering, but we’re also seeing that Cradlepoint becomes integrated into our business and seeing the growth opportunities now materializing in the numbers from Cradlepoint.

Ekholm said that the expects to see the U.S. C Band auction result in deployments during the second half of this year. Verizon, in particular, has indicated that it wants to have 7,000 to 8,000 C Band sites ready to go when the spectrum is cleared in late 2021.

Ekholm also briefly addressed Ericsson’s supply chain. AT&T CEO John Stankey raised the potential for C Band equipment supply chain issues this week during AT&T’s quarterly call with investors. Asked about the carrier’s plans for C Band deployment, Stankey said that global supply chains are “stretched” and as a result, he is “a little skittish,” adding that the company is “seeing dynamics that are occurring in the global supply chain where unexpected things are popping up, and it is possible that we could see certain element shortages that start to crop up as everybody’s racing to put stuff up on towers.”

The CEO categorized 2021 as an investment year for Ericsson, particularly in its Digital Services segment, and that the company is incurring costs ahead of revenues — some of which might come as soon as the fourth quarter, but “we’re really going to see revenues coming in 2022,” he said.