Verizon Executive VP and CTO Kyle Malady stated:  Right now we have about 1/3 of our cell sites and small cells on our own fiber asset (backhaul). And I think that’s — we like the owner’s economics of that. We also like the control of the network because we can maintain quality and reliability.

Let’s talk about Verizon’s One Fiber project, where you’re building in more than 60 cities. Has that continued at its pace that it was at last year? Has it slowed down at all? And at what point is most of the network core already built and you’ve really flipped to more kind of success-based fiber CapEx once you get beyond the core build?

We’re getting there on the core build. I’d say maybe 80% there roughly. And now it’s more connecting in a lot of markets. It’s more connecting the cell sites into it and making what we call laterals. So building the fiber laterals to cell sites or what have you and connecting back to the core. So we got two or three more years left on our fiber build here. And then primarily, it will be just success-based builds.

Verizon launched its One Fiber initiative in 2016, unifying its fiber planning and purchasing for both wireless and wireline into a single program. It initially announced a six-year, $300 million project in Boston, eventually outlining ambitions to add fiber to more than 60 markets outside of its ILEC footprint.

We’ve made a conscious effort to really pair our wireless engineering with a fiber engineering process and what that’s allowed us to do is pursue over 60 markets around the country. We’re going to actually be building fiber into the footprint and, you know, truthfully, serving our own needs if you will from a frontal and backhaul perspective. That’s a very integrated engineering process that creates tremendous synergy on our end and allows for very rapid deployment. 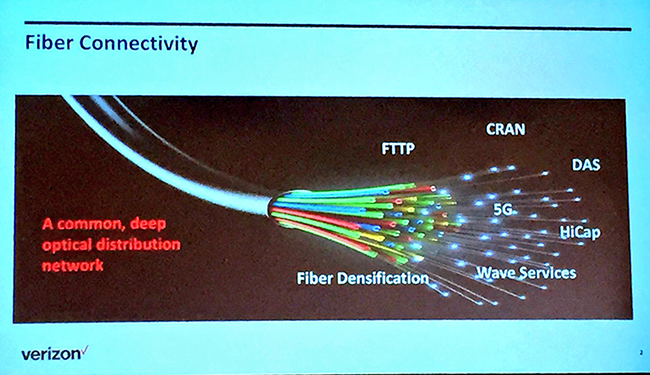 Now that we have millimeter wave and C-Band spectrum, I feel confident that we can do this. And I feel confident we can do this in a good way, a way that is consistent with the quality people have come to rely on Verizon for. So we’re going to engineer this right. We have enough spectrum to do it. And I’m excited about the possibilities for us from a — meeting customers where they want to be. And without this millimeter wave and C-Band, we couldn’t have been able to support this kind of use case.

Besides the consumer market for 5G Home, SMB seems to be kind of a no-brainer. If we make it easy to use, if we make it easy to buy and set up and utilize, people will probably figure out ways to use that we haven’t even thought of yet. So I do think it’s something that will be used across the board. You could use it (5G Home) at Wells Fargo. You could use them in ATMs. You can use the service for a whole host of things, if you make — if it’s easier to use, more reliable, good price point. So if the value is there, I think people will use it no matter kind of — no matter what segment of the economy they are in. So — but obviously, we’re a heavy Consumer company, and that’s where we’re going to start.

Malady added he expects Verizon’s fiber experience to give it a competitive edge in the FWA arms race with rivals like T-Mobile. “Having been in the FiOS game for a long time we understand what works, what doesn’t work, how to set things up, the customer support, all the different angles. So I do believe that having experience with FiOS is absolutely going to translate over to what we do with 5G Home.”

Verizon’s ‘One Fiber’ Scam for 5G Wireless: Did Verizon Fool the Public and Investors? | by bruce kushnick | Medium