Fully two years before the IMT 2020 “5G” standards are completed, Verizon announced at a “sell side analyst meeting” that it will launch a “5G” fixed wireless broadband service for residential customer Internet access in three to five U.S. markets in the second half of next year (2018). The company plans to use what they claim is “an early version of 5G” for the fixed wireless services.  It’s supposedly the same technology that AT&T is testing in several cities.

Author’s Note:
As I’ve been saying for quite some time, these so called “5G” commercial service offerings are way to premature, because the ITU-R WP5D won’t even complete evaluation of the IMT 2020 Radio Access Network (RAN) technologies by end of 2020!

This piece in Barron’s seems to sum the mood up. Light Reading found out the “5G” equipmentt being used is supplied by Ericsson and Samsung.

Verizon’s first commercial launch is planned to be in Sacramento, CA in the second half of 2018. Details of that launch, and the announcement of additional markets, will be provided at a later date, the company said.  Verizon plans to commercially deploy this broadband fixed wireless access service to a total of three to five markets in 2018.

Verizon already trialed 5G residential applications in 11 markets in 2017.  The commercial launch is based on customer experience and on Verizon’s confidence in new technology powered by mmWave spectrum, the #1 US mobile operator said.

The company sees a potential market of 30 million households in the US for “5G” residential broadband services. The initial launch in 2018 is not expected to require significant capex. Speaking at an investor conference, Verizon said its capex in 2018 would be “consistent with the past several years.”  The top U.S. mobile operator previously said that its 2017 capex will be between $16.8 billion and $17.5 billion.

“This is a landmark announcement for customers and investors who have been waiting for the 5G future to become a reality,” said Hans Vestberg, Verizon CTO. “We appreciate our strong ecosystem partners for their passion and technological support in helping us drive forward with 5G industry standards, for both fixed and mobile applications. The targeted initial launches we are announcing today will provide a strong framework for accelerating 5G’s future deployment on the global standards.”

This “5G” fixed wireless broadband access (FWBA) will use the 28 GHz spectrum band.  Verizon forecasts the total addressable U.S. market for that technology is approximately 30 million homes. FWBA seems like a great idea as no fiber or wires have to be installed, but it has many challenges.  Those include: poor propagation characteristics of millimeter wave spectrum.

A few slides from Verizon’s presentation: 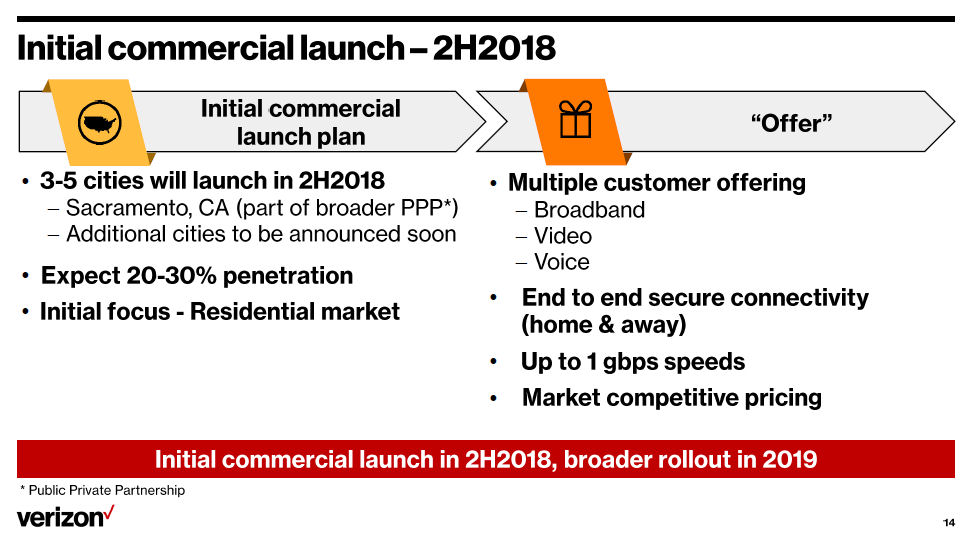 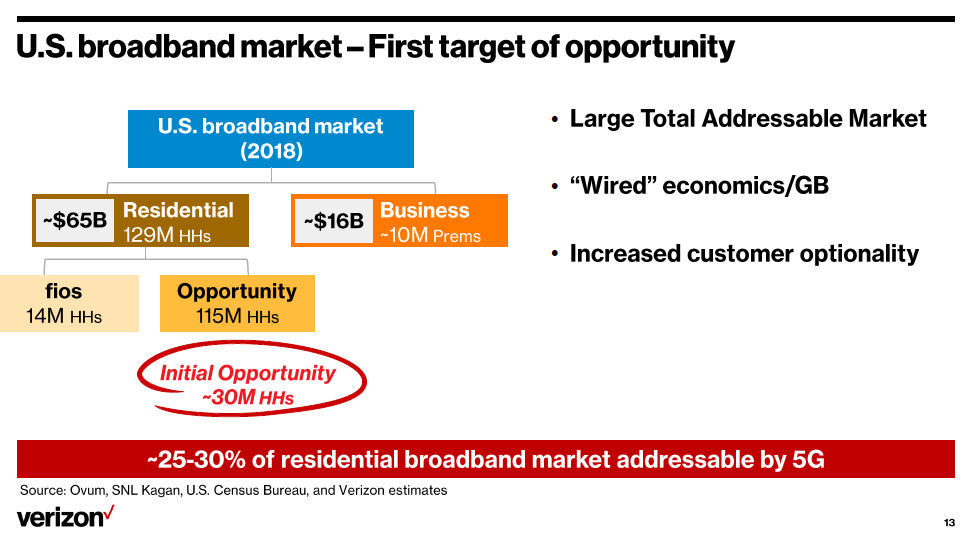 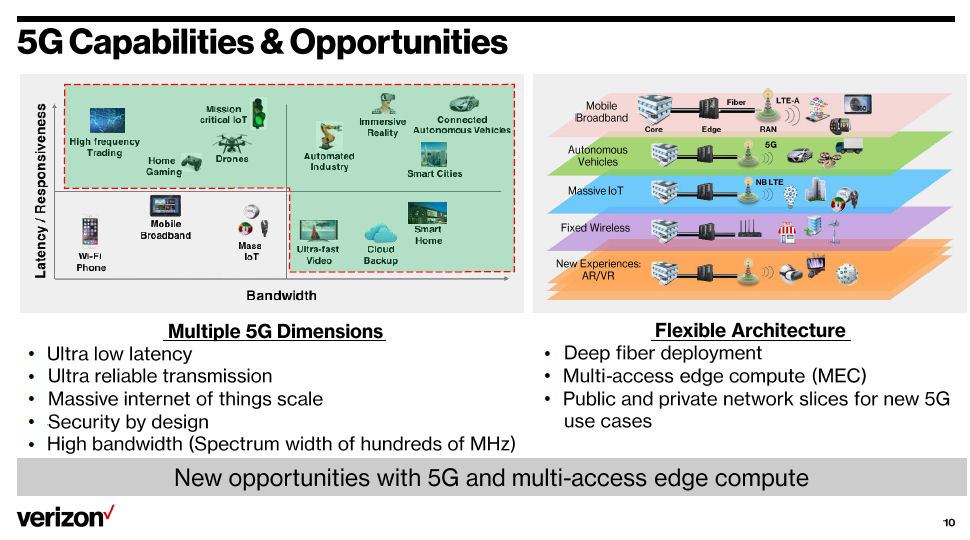 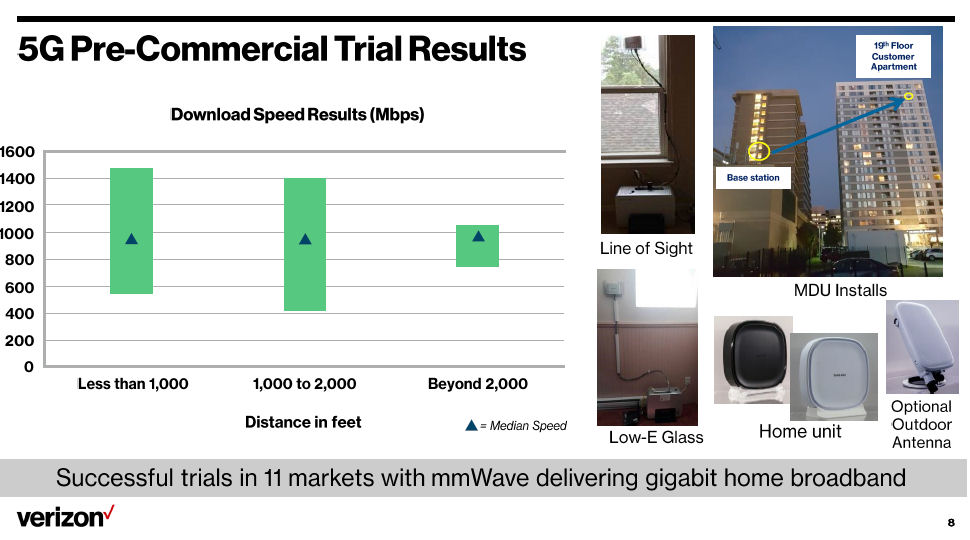 At the investor conference, Verizon said  that 25% to 30% of the “residential broadband market” in the US is “addressable by 5G.” Verizon says that could be up to 30 million households. According to the US Census Bureau, in 2016 there were 125.82 million across the US.

In the trials so far, Verizon said that it has served a 19 floor apartment building with the 28GHz millimeter wave (mmWave) 5G connection. The operator has been testing “home units” and “optional outdoor antennas” in the tests. Verizon has also been testing outdoor window-mount antennas that use an optical connection to an indoor WiFi router to distribute the signal.

Verizon is continuing to test its own fixed 5G specification in multiple markets. It will test the 3rd Generation Partnership Project (3GPP) release 15 New Radio (NR) specification in the US in 2018.

–>Note yet again that 3GPP’s NR has not even been presented to ITU-R WP5D nor have any other Radio Interface Technologies (RITs).  However, 3GPP has indicated it’s intent to submit NR for consideration late in 2018 when WP 5D will start to evaluate RITs.

Matt Ellis, EVP & CFO, will speak at the UBS 45th Annual Global Media and Communications Conference on December 5th at approximately 8:00 AM ET.