First announced in 2019, the Equiano system is the third international submarine cable to be owned by Google and their fourteenth submarine cable investment in total.  The Equiano cable system is expected to be ready for service by the end of this year.

It is named after Olaudah Equiano, an 18th century writer and abolitionist originally from what is now Nigeria. Enslaved as a child, Equiano purchased his freedom in 1766 and went on to play a major role in the British anti-slave trade movement of the 1780s.

The cable is set to span the West Coast of Africa, travelling from Lisbon, Portugal, down to Cape Town, South Africa, offering a myriad of branching opportunities to neighbouring African countries on the way. Branches already planned include those to Nigeria, St. Helena, Democratic Republic of the Congo, and Namibia, with many more likely to be announced later this year.  Please see illustration below.

When previously announced, the system’s first African landing was expected to be at Lagos, Nigeria, but discussions between Google and the Togolese government – particularly surrounding the latter’s Togo Digital 2025 strategy, which aims to make the nation a regional digital hub – saw Togo’s capital Lome jump the queue.

Togo’s minister for digital economy and digital transformation, said her government successfully made the case to Google that it should be Togo instead.

“Togo, which was not on the list of beneficiary countries of the first cohort, was integrated after several months of negotiations and it becomes the first African country to host the cable,” said the Togolese Minister of Digital Economy and Digital Transformation, Cina Lawson.

“As Togo continues to earn its place on the regional and international stage as a digital hub and a favorable ecosystem for innovation and investment, our collaboration with Google and CSquared in successfully landing Equiano further demonstrates Togo’s commitment to enhancing public and social services for all citizens so that they can benefit economically.”

Lome is already a host to two submarine cable systems: the West Africa Cable System (WACS), which spans a similar route to Equiano but continues north to London, UK, and the shorter Maroc Telecom West Africa cable, which travels from Casablanca, Morocco, down to Libreville, Gabon.

The Equiano cable system will be maintained and operated by CSquared Woezon, a joint venture of open access wholesale broadband infrastructure company CSquared and the Société d’infrastructures numériques (SIN), a sovereign entity responsible for holding strategic assets in the telecommunications and ICT sector in Togo. The joint venture, in which CSquared holds a 56% stake, will also manage the related e-Government and Communauté Electrique du Bénin (CEB) terrestrial fibre networks in Togo. 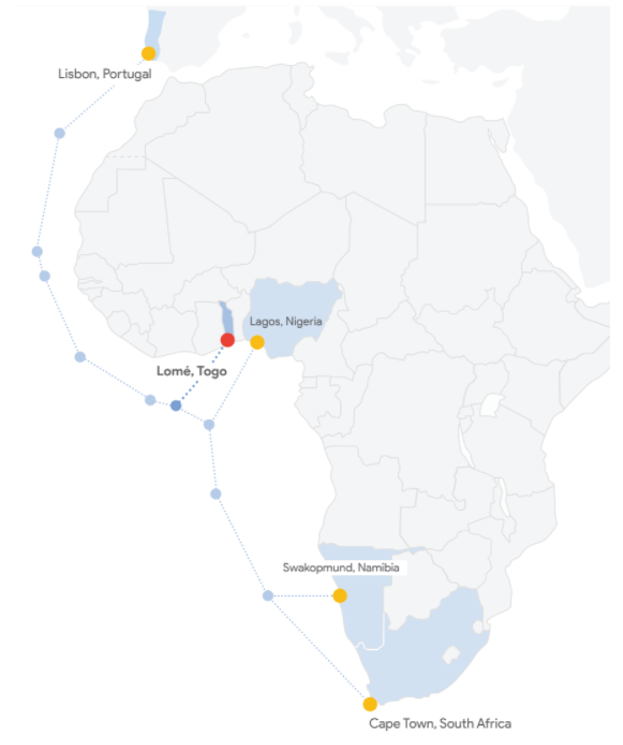