Verizon has reportedly shown growing interest in providing service in the 3.5 GHz band via Citizens Band Radio Service (CBRS) frequencies, even though federal regulators (FCC and NTIA- see below) have yet to allow carriers to launch commercial operations using the mid-band spectrum. The development also points to Verizon’s increased enthusiasm for unlicensed spectrum, which saves money at the risk of frequency crowding.

Verizon first signaled its interest in the 3.5GHz CBRS band during the Mobile World Congress trade show in 2017. Ed Chan — now one of Verizon’s top network executives — said CBRS could power a number of business models including both private and commercial mobile networks. And then last year Verizon issued a press release about its ongoing CBRS testing with Federated Wireless, Google, Nokia and Qualcomm.

But the fact that Verizon is already deploying CBRS antennas into its network, and is already selling several CBRS-capable phones including the Pixel 3 and the Samsung Galaxy S10, shows that Verizon is keen to put the band to commercial use much more quickly than expected.  According to some new Verizon cell tower applications, the largest U.S. wireless network operator is now specifically noting support for the 3.5GHz band: 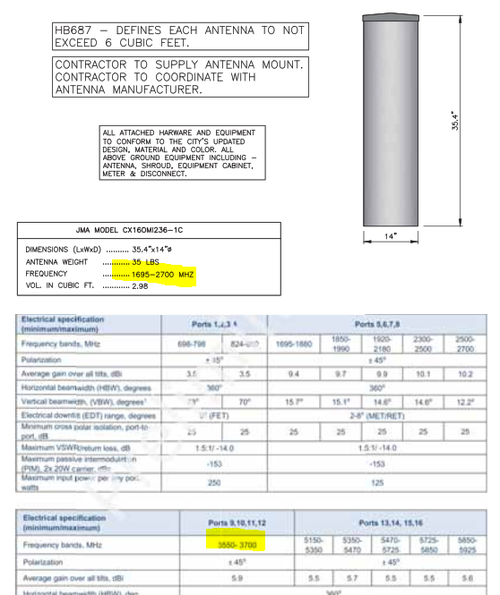 Verizon and a wide range of other companies are waiting for the FCC and NTIA to give final approval for initial commercial deployments in the CBRS 3.5GHz band. Those approvals are expected in the next few weeks. After monitoring the initial deployments, the FCC is expected to sign off on broad, unlicensed commercial use of the 3.5GHz band in the third quarter.  In 2020, the FCC is expected to conduct auctions of 3.5GHz licenses.

Verizon, like most wireless carriers, wants to add more spectrum to its network to keep pace with increasing user traffic. But instead of spending billions of dollars buying spectrum from someone like Dish Network, or buying it at a government auction, Verizon increasingly is using unlicensed spectrum. Such spectrum is free to use but can become crowded.

Verizon may employ the same strategy in the 3.5GHz CBRS band. And the reason Verizon is moving so fast to do so is probably to add capacity to its network quickly. As noted by the Wall Street analysts at Wells Fargo, Verizon sits well behind AT&T in terms of overall mid-band spectrum ownership: 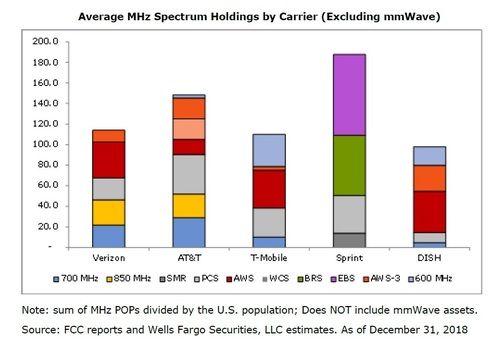 Verizon doesn’t own as much mid-band spectrum as some of its competitors.

China Telecom was allowed to use the 3.4 GHz to 3.5 GHz frequency range to carry out 5G trials in mainland China. Under the agreement with the Chinese government, China Telecom will return its 2.635 GHz to 2.655 GHz spectrum over the same timeframe.

China Unicom said it has been approved to use the 3.5 GHz to 3.6 GHz frequency band for a nationwide 5G trial rollout until June 2020. The telco said that it will gradually cease to use the frequency in the 2.555 GHz to 2.575 GHz range that it had been using for 5G trials and progressively return it to the MIIT.