Ren Zhengfei, Huawei’s founder and CEO, says that his company will produce more than 2 million base stations over the next 18 months, regardless of whether the US decides to remove it from the Entity List.  Zhengfei said that while the US’ decision to add Huawei to the entity list was profoundly unjust, it would have little impact on the company’s productivity – particularly with regards to its 5G network equipment.

How many more will they ship after IMT 2020 RIT/SRIT has been standardized by ITU-R in late 2020?

“First of all, please note that adding us to the Entity List was not fair. Huawei has not done anything wrong but was still placed on this list. This list didn’t have that much impact on us. Most of our more advanced equipment does not contain U.S. components, despite the fact that we used their components in the past. These newest versions of our equipment even function 30% more efficiently than before,” he said.

“In August and September, we will undergo a run-in period before we can mass produce these new versions. So, we can only produce around 5,000 base stations each month during that period. Following that, we will be able to produce 600,000 5G base stations this year and at least 1.5 million next year. That means we don’t need to rely on U.S. companies for our survival in this area,” Ren explained.

Ren Zhengfei, Huawei’s founder and CEO says the conflict with the U.S. has exceeded what he had previously thought.

While the impact on Huawei’s network infrastructure business is expected to be minimal, being added to the Entity List does create problems for Huawei’s handset business, particularly as the company looks to reel in its rival Samsung and claim top spot in the market. If Huawei were to be permanently added to the Entity List, it would lose access to Google’s Android operating system, which the company uses as standard on all its smartphone handsets.

“I could never have expected this controversy to be so intense though,” Ren said in a recent interview with Sky. “We knew that if there were two teams climbing up the same mountain from opposing sides, we would eventually meet on the peak and we may clash. We just didn’t expect this clash to be so intense and lead to this kind of conflict between the state apparatus of a country and a company.”

Ren has reportedly sent out another memo detailing the fallout of the conflict, which does finally seem to be hitting home. Job cuts are on the horizon, with replicative staff facing the axe and a simplified management structure promised. Contracts and payments will face higher scrutiny also, to keep an eye on free cash flow, while R&D seems to have been impacted also.

Android vs HarmonyOS on Huawei smartphones:

Huawei’s preference has always been to continue to use the Android operating system on its handsets, however, the US’ latest political campaign has forced the company to bring forward the release of its own OS, HarmonyOS.

“Google is a great company. We have a sound relationship with Google. We have signed many agreements with Google over the years. We still want to use Google’s system in our devices and develop within its ecosystem. Because of this, we hope that the U.S. government will approve the sale of Google’s system to us. There are billions of Android system users and billions of Windows system users around the world. Banning one or two companies from using these systems won’t help ensure the security of the U.S. as a country, so they should keep their doors open.”

“If the U.S. doesn’t want to sell the Android system to us, we will have no choice but to develop our own ecosystem. This isn’t something that can be achieved overnight. We estimate that it will take us two or three years to build this ecosystem. In light of all this, we don’t believe we will be able to become the number one player in the device sector any time soon,” Ren added.

Huawei is already the undisputed leader in optical network and cellular network equipment.  They are destined to be #1 in 5G network gear sales, independent of the U.S. sanctions and bans.  Huawei is also #2 in global smartphone sales (Samsung is #1).  And they’ve introduced a host of new innovative products like the Honor Vision smart screen.

While Americans shamefully excuse the isolation of Huawei as a wise action rooted in “national security” and an aversion to thievery, they don’t realize that Huawei has 80,000 R&D employees (mostly in China) and it spent $15 billion on R&D in 2018 alone.  Of course, the Chinese government may have directly or indirectly funded much of that R&D but it is what’s contributed hugely to Huawei’s success. 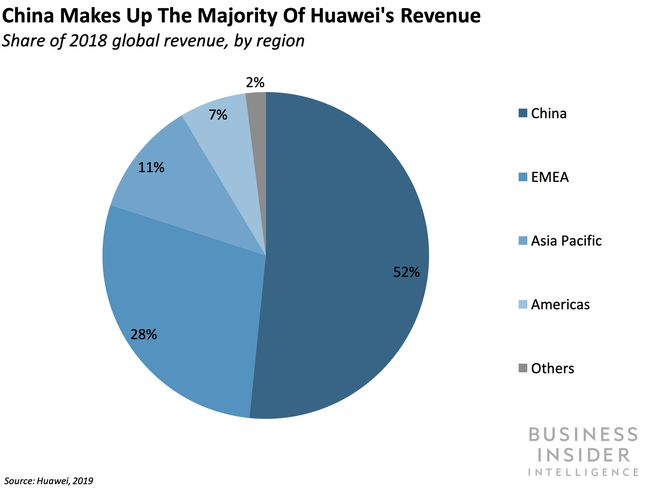