Jet lagged yet energetic and cheerful, Comcast Senior VP of Next Generation Access Networks Elad Nafshi returned from a motor bike trip in the European alps (via a red eye flight from Frankfurt, Germany to SFO) to deliver an important keynote speech at the  Open Networking Foundation (ONF) Connect 2019 conference in Santa Clara, CA this Friday.  A graduate of Tel Aviv University, Mr. Nafshi has been with Comcast for over 14 years.

Elad announced that Comcast, the leading ISP in the U.S. by subscribers, has deployed the open source ONF Trellis software and reference hardware design “in multiple markets with real customers.” He noted that “This is not a technical trial or PoC. We have not deployed a new appliance. We deployed an entire ecosystem.”

Trellis is an SDN-based, multi-purpose leaf-spine (AKA spine-leaf) switching fabric designed for access-and-edge networks, NFV, and edge cloud applications. It uses the Open Network Operating System (ONOS) open source SDN controller running in an x86 based compute server and the OpenFlow protocol as a “southbound API” (Control plane to/from Data plane) to interface with multiple interconnected white box/bare metal L2/L3 switches.  That configuration is shown in the illustration below. 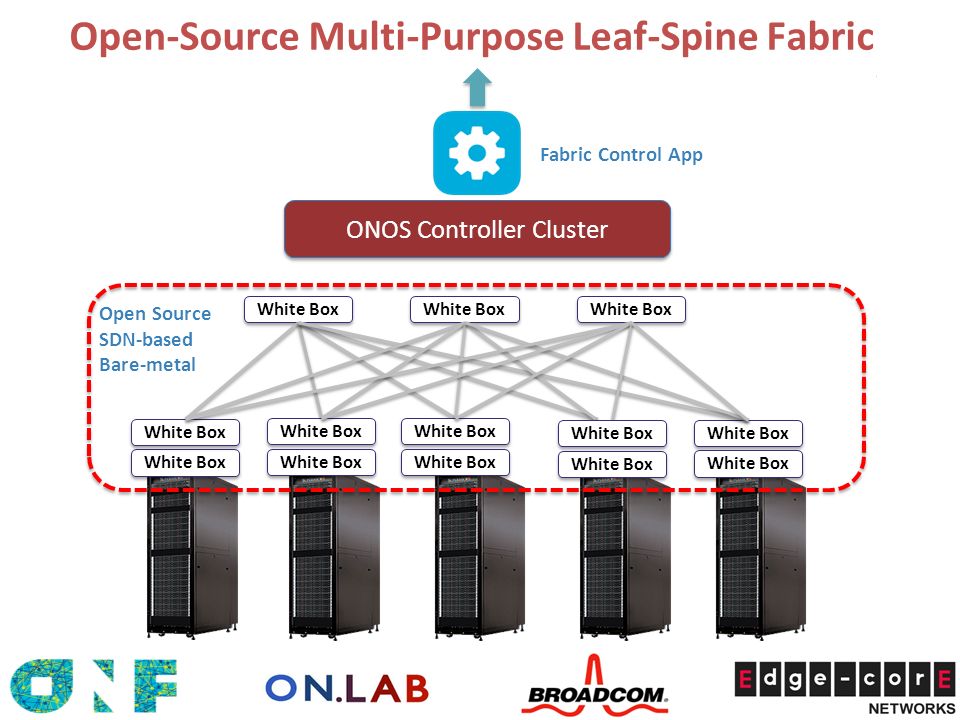 “In collaboration with the ONF and a team of supply chain vendors, Comcast is deploying the open source Trellis platform as the networking fabric in our next generation access network,”  Nafshi said in a press release. “This has been a multiple year journey from design, to extensive field trials and finally to production rollout, and we’re impressed with the results and the advantages that using open source and Trellis are delivering for us as we upgrade our access network,” he added.

While Elad said that Trellis rollouts are accelerating and may “soon come to an area near you,” he declined to answer questions about the locations, size or scale of Comcast’s Trellis deployments.   I talked to Elad after his speech and found him to be very engaging and congenial.

Comcast claims an open source- and a white box-based Ethernet backhaul is integral to its next generation network access strategy.  By using Trellis, Nafshi said Comcast improved network scalability as well as space and power facility efficiencies in its cable head-ends.

Note 1.  Distributed Access Architecture (DAA) enables the evolution of cable networks by decentralizing and virtualizing headend and network functions. DAA extends the digital portion of the head-end or hub domain out to the fiber optic node and places the digital to RF interface at the optical-coax boundary in the node. Replacing the analog optics from the head-end converts the fiber link to a digital fiber Ethernet link, increasing the available bandwidth improving fiber efficiencies (wavelengths and distance), and directional alignment with NFV/SDN/FTTx systems of the future.

“This has been a multiple year journey from design, to extensive field trails and finally to production rollout, and we’re impressed with the results and the advantages that using open source and Trellis are delivering for us as we upgrade our access network,” Elad said.

While Comcast’s conventional network currently relies on embedded routing and switching protocols running on individual vendor specific switches, Trellis software runs in a cloud-native SDN fashion on a cluster of standard compute server nodes each of which implements a centralized control plane via the ONOS SDN controller.  This new SDN based architecture makes network design, deployment, debug and upgrades much simpler, while minimizing network complexity and cost.

“This is real, true production at scale,” said ONF VP of Marketing Timon Sloane. “The design has been vetted and tested and hardened over multiple years.  It’s in multiple markets, with tens of thousands of subscribers.”

“The open source ecosystem created by ONF has collectively established a new ‘Distributed DevOps’ model through the process of trialing, hardening and deploying Trellis with Comcast.  This has established a new formula for open source whereby an operator, ONF and a consortium of commercial entities come together to collectively build and stand behind a deployment,” said Saurav Das, Vice President of Engineering for the ONF.

Earlier at this week’s ONF Connect 2019 event, Arthur D. Little, AT&T, Deutsche Telekom, and Telefónica released a study that found virtualized, cloud-based architectures can save network operators 40% in capex and 25% in opex.

10 thoughts on “Comcast: ONF Trellis software is in production together with L2/L3 white box switches”