Microsoft Corp. is partnering with SpaceX to use the latter’s Starlink satellite internet service, as the software giant opens a new front in its cloud-computing battle with Amazon.com Inc. targeting space customers.  Starlink is SpaceX’s ambitious plan to build an interconnected internet network with thousands of satellites.  It’s designed to deliver high-speed internet service to anywhere on earth (just like satellite phones for voice communications).

A new “Azure Modular Datacenter” is essentially a mobile unit about the size of a semi-trailer. Starlink’s global coverage helps make these Azure Modular Datacenters possible, as Microsoft says the product is designed “for customers who need cloud computing capabilities in hybrid or challenging environments, including remote areas.”

“The collaboration that we’re announcing today will allow us to work together to deliver new offerings for both the public and the private sector to deliver connectivity through Starlink for use on Azure,” SpaceX president and COO Gwynne Shotwell said in a video. “Where it makes sense, we will work with [Microsoft]: co-selling to our mutual customers, co-selling to new enterprise and future customers.”

To date, SpaceX has launched over 800 Starlink satellites – a fraction of the total needed for global coverage but enough to begin providing services in some regions, including in the northwest U.S. The company has an ongoing private beta test of the service, and is also working with organizations in rural regions of Washington state to deliver satellite internet service.

Some analysts have projected that the total revenue from space-related cloud services could total about $15 billion by the end of the decade, at least several times higher than current levels.

Competition in the cloud between Amazon AWS, the market leader, and No. 2 Microsoft Azure has been heating up in recent years.  Amazon offers a service to connect its AWS cloud to satellites and is working on a competitor to Starlink called Kuiper – in addition to Bezos’ personal investment in his space rocket builder Blue Origin.  The pandemic has intensified competition between AZURE and AWS  as companies accelerate their shift to the cloud and make vendor choices that could last for years. At the same time, military and intelligence agencies are ramping up spending on a range of space projects.

Space is only the latest area where the two cloud giants are going head-to-head. In June, Amazon launched a dedicated business unit focused on securing space-related contracts. Amazon already has Maxar Technologies Inc. and Capella Space as customers, helping them manage data coming from satellites.

Microsoft’s goal is to create integrated, secure networks, linking various cloud, space and ground capabilities. The system, for instance, would accumulate and analyze huge volumes of data, supporting missions such as space-debris surveillance and missile warnings and helping to control the orbits of commercial satellites.

“The space community is growing rapidly, and innovation is lowering the barriers of access for public and private sector organizations.  What used to solely be the bastion of governments, the innovation developed by private space companies has democratized access to space, and the use of space to create new scenarios and opportunities to meet the needs of both the public and private sector space has been powering the world for a long time,” wrote Microsoft Corp VP of Azure Global Tim Keane in a blog post.  “We intend to make Azure the platform and ecosystem of choice for the mission needs of the space community,” Keane added.

In addition to working with SpaceX, formally known as Space Exploration Technologies Corp., Microsoft said it is in partnership with Luxembourg’s SES SA, which separately operates a network of larger satellites significantly farther from earth under the brand O3b. Microsoft executives declined to disclose the size of their anticipated investment, but the initiative targets some of the fastest-growing national-security endeavors in space, sometimes harnessing artificial intelligence.

SpaceX, which is in the process of deploying its Starlink project consisting of thousands of high-speed internet satellites intended to provide connectivity around the globe, makes a natural partner for Microsoft. A major reason is that Amazon founder Jeff Bezos is pursuing his own low-orbit satellite constellation. Jeff Bezos also owns Blue Origin, a rocket company competing with SpaceX.

Elon Musk has sparred with Bezos before. The SpaceX chief executive who also runs electric-vehicle maker Tesla Inc. this year called for a break up of Amazon after the retailer rejected a book about the coronavirus pandemic. Amazon later said it had taken the action in error.

Microsoft and Walmart Inc. struck a cloud-computing deal two years ago. And this year the software giant and FedEx Corp. struck a partnership. Months earlier, Amazon had temporarily blocked some of its vendors from using some FedEx services.

Amazon’s and Microsoft’s steps in space come as the U.S. Defense Department is moving rapidly to embrace such sprawling constellations of smaller spacecraft for communications, surveillance and other applications. Pentagon brass have said smaller, lighter and more maneuverable satellites are essential to protect U.S. assets from potential hostile actions in space.

Microsoft is “focused deeply on governments and defense,” said Tom Keane, a corporate vice president. The space effort, he said, provides an opportunity “to bring commercial technology and innovation to the military.” 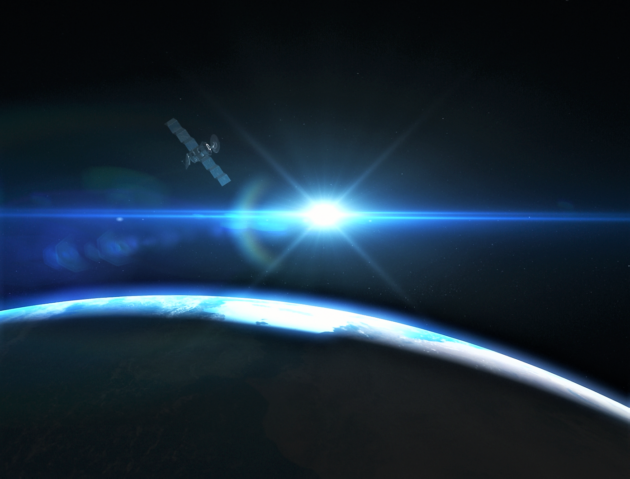 SpaceX recently won a demonstration contract for a new generation of missile-warning satellites, which industry officials say could serve as the backbone for eventual Microsoft forays into that arena.

The U.S. national-security establishment also is shifting to greater cloud use. Microsoft last year beat out Amazon for a potential $10 billion cloud-computing contract for the Pentagon. Amazon has challenged the decision, which has since been affirmed by the Pentagon.