Four of Europe’s biggest network operators have signed a Memorandum of Understanding (MoU) to express their individual commitment to the implementation and deployment of Open Radio Access Network (Open RAN) as the technology of choice for future mobile networks across Europe. In a statement, Telefonica, Deutsche Telekom, Orange and Vodafone pledged to back Open RAN systems that take advantage of new open virtualized architectures, software and hardware with a view to enhancing the flexibility, efficiency and security of European networks in the 5G era.

The four operators committed to working together with existing and new ecosystem partners, industry bodies like the O-RAN Alliance and the Telecom Infra Project (TIP), as well as European policy makers, to ensure Open RAN quickly reaches competitive parity with traditional RAN solutions. “This initiative is an important milestone towards a diverse, reinvigorated supplier ecosystem and the availability of carrier-grade Open RAN technology for a timely commercial deployment in Europe,” they said in a joint statement.

The MNOs added that the introduction of Open RAN, virtualisation and automation would pave the way for a fundamental change in the way operators manage networks and deliver services, allowing them to add or shift capacity more quickly for end users, automatically resolve network incidents or provide enterprise level services on-demand for industry 4.0.

The four operators also expressed the hope that the European Commission and national governments will agree to play an important role in fostering and developing the Open RAN ecosystem by funding early deployments, research and development, open test lab facilities as well as incentivising supply chain diversity by lowering barriers to entry for small suppliers and startups.

The MoU comes a few days after Telefonica announced plans to use open RAN technology at around 1,000 of its mobile sites in Germany. Vodafone made a similar commitment at around 2,600 of its masts and rooftops in the UK at the end of last year.

Without orders from numerous large operators, open RAN producers have struggled to increase volumes and generate the necessary economies of scale.

“This is like putting the band back together,” says Gabriel Brown, a principal analyst with Heavy Reading, a sister company to Light Reading. “The European operators are saying if we co-operate then we can have a meaningful influence and impact on the way open RAN develops.”

Operators are drawn to open RAN because it would allow them to mix and match vendors, using radio software from one vendor in tandem with general-purpose equipment developed by another. Traditional radio access networks typically force operators to buy all their components from the same supplier.

While today’s statement is light on details of firm commitments, Vodafone has already promised to use open RAN technology at around 2,600 of its mobile sites in the UK, while Telefónica this week said it would do the same at roughly 1,000 sites in Germany.

Deutsche Telekom, Germany’s telecom incumbent, has had less to say about rollout targets, although in December it revealed plans to build an “O-RAN town” in Neubrandenburg this year. “This will be a small-scale commercial deployment, which will encompass up to 150 cells, and will bring open RAN into a real 4G/5G network environment,” said a Deutsche Telekom spokesperson by email.

That leaves France’s Orange, which has now made a jaw-dropping commitment: Starting in 2025, it will buy only open RAN equipment when upgrading its European networks.

“From 2025, our intention is that all new equipment deployed by Orange in Europe should be based on open RAN,” says Arnaud Vamparys, Orange’s senior vice president of radio networks. “This is a good time to send a clear message.”

His expectation is that over this timeframe open RAN will reach “parity” with traditional RAN for deployment in a macro network. That would mean resolving some of the performance shortcomings that have mainly restricted open RAN to rural and less demanding conditions.

“2025 sounds about right,” says Brown. “The integrated systems are really setting a very high bar and open RAN is behind on features and performance right now.”

Brown told Light Reading he was encouraged by some of the recent open RAN activity in the semiconductor industry, citing baseband advances by Marvell and radio innovation by Xilinx.  But he says it is too early to say open RAN will definitely be a mainstream success by the mid-2020s. “Can this be the best way to build a radio access network? If it isn’t, it is probably not going to succeed.”

“We continue to work to unlock the value of these European programs because clearly there are industry-leading initiatives of some of the manufacturing being brought back to Europe, especially on open RAN,” said Markus Haas, Telefónica Deutschland’s CEO, when asked during an analyst call this week if the telecom sector could be a beneficiary of Europe’s COVID-19 recovery fund.

“There is high interest so that the overall industry, the vendor landscape, might change or might be empowered by additional funds in order to progress and accelerate open RAN.”

While Ericsson and Nokia say they are now investing in open RAN technology, Vodafone looks determined to use alternative players for its 2,600-site rollout. Supplier diversification has topped the agenda for other service providers, as well.

“We want Europe to play a role in that evolution and it has to unite a bit to achieve this goal,” says Orange’s Vamparys. “There are lots of US and Japanese companies pushing strongly for the acceleration of open RAN. If we don’t communicate and help other companies, it could create an unbalanced situation.” 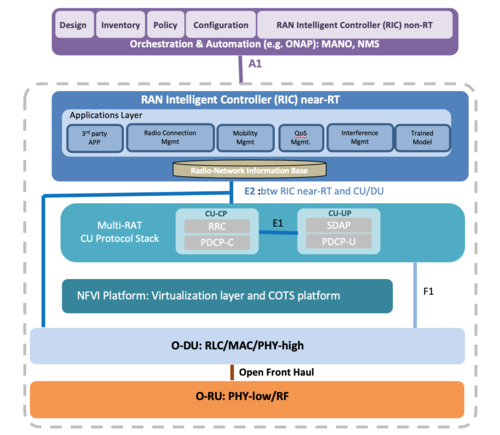 Telefónica Deutschland named Altiostar, KMW, NEC and Supermicro as potential open RAN partners in a presentation it gave this week, while Deutsche Telekom has been in talks with Dell, Fujitsu, Mavenir, Nokia and NEC.

Vodafone has already carried out open RAN trials with Mavenir and Parallel Wireless.

The region’s biggest gap is probably in silicon, says Heavy Reading’s Brown. Most of the high-profile chipmakers developing open RAN technology, including Marvell and Xilinx, are based in the US.

Arm, a UK-based firm whose processor designs are used in many of the world’s smartphones, is a member of the O-RAN Alliance, the group responsible for open RAN specifications. But it is also currently the target of a $40 billion takeover move by Nvidia, a US semiconductor maker.

In the meantime, any plan to use part of the European recovery fund to support open RAN could meet with political resistance given the healthy state of the telecom sector compared with other industries, including airlines, hospitality, retail and tourism.

John Strand, the CEO of advisory firm Strand Consult, lashed out at the suggestion that open RAN could benefit from Europe’s COVID-19 stimulus package.

“Do these companies need subsidies? Is Telefónica in such a bad position that it needs public funding?” he told Light Reading. “We are living in a time when numbers of companies are in deep financial crisis because of COVID-19 and telecom operators, which definitely haven’t been hit, are asking for subsidies.”

Market forecasters now think open RAN will account for about one tenth of the overall market for radio access network products by the mid-2020s: