Viasat Inc. today announced the first satellite in its ViaSat-3 global constellation has reached a major milestone with completion of payload integration and performance testing, and shipment to the Boeing Satellite Systems facility in El Segundo, Calif.   That satellite constellation will serve the Americas and the surrounding oceans regions. Launch is targeted for early calendar year 2022.

“This is an incredibly exciting time for Viasat as the first of the three high-powered ViaSat-3 satellites in our global constellation enters the final stages of production,” said Dave Ryan, president, Viasat Space & Commercial Networks. “Once complete, we will be ready to put the world’s highest-capacity single satellite into geostationary orbit to serve the world by delivering broadband to the hardest-to-reach areas anywhere — on the ground, in the air and at sea.”

Each ViaSat-3 satellite is expected to generate over 20kW of payload power, making it among the highest-power commercial satellites ever built. Just three of these satellites will cover nearly the entire globe, and are expected to deliver over 3,000 Gigabits per second (Gbps) of capacity — or 3 Terabits per second (Tbps) total — for 15 years or more.

The ViaSat-3 constellation is anticipated to have roughly eight times more capacity than Viasat’s current fleet combined. Vast amounts of bandwidth are needed to address increased demand for high speed internet access — particularly in the video streaming realm. ViaSat-3 represents a major advancement in Viasat’s mission to extend broadband internet service to the many places around the world that don’t have it.

Ryan added, “While the payload was assembled at Viasat’s Tempe, AZ facility, the effort was company-wide. From Tempe, to the antenna expertise in Duluth (GA), to Germantown (MD) for their software and systems engineering know-how and other offices around the world from Chennai, India to Lausanne, Switzerland as well as at our Carlsbad headquarters, all of these teams worked together to come up with a totally unique way to not only build this spacecraft, but to test it in record time.”

Viasat plans to launch and operate two more ViaSat-3 satellites that will serve Europe, the Middle East and Africa (EMEA) and the Asia Pacific (APAC) regions. The ViaSat-3 EMEA payload is expected to be delivered to Boeing in the latter part of the company’s fiscal 2022.  That will help Viasat push ahead with plans for a new set of satellites that have been slowed by the pandemic.

“I can’t predict that there won’t be any other COVID impacts,” Rick Baldridge, Viasat’s president and CEO, said on the company’s recent fiscal Q4 2021 earnings call regarding the ViaSat-3 program, noting that the second payload (for the EMEA) region is running about six months behind the first payload for the Americas. “It has definitely hit us pretty hard this last year on that payload.” 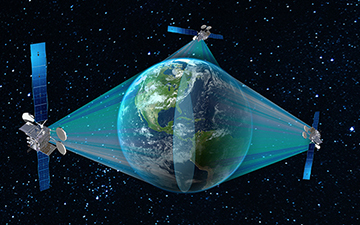 Together, the trio of ViaSat-3 satellites is expected to deliver more than 3 Tbit/s of capacity over an anticipated lifespan of at least 15 years. The ViaSat-3 constellation is expected to support about eight times more capacity than Viasat’s current satellite broadband fleet combined, the company said.

That will also be coming together amid a race to deliver satellite broadband services on a global scale. SpaceX’s Starlink service, still in beta, is progressing with a plan to launch and operate thousands of low-Earth orbit (LEO) satellites.

Last month, Viasat asked the FCC to stay an April 27 order granting SpaceX’s application to modify its LEO system until a court reviews Viasat’s request for an environmental review of Starlink’s expanding constellation of broadband satellites.

“The Commission has violated the National Environmental Policy Act (NEPA) by failing even to assess the environmental impact of both deploying thousands of satellites into low-Earth orbit (LEO) and then having those satellites ultimately disintegrate into the atmosphere,” Viasat argued in its filing. “Because the Order will allow SpaceX to cause immediate and irreparable harm to Viasat and the public at large, the Commission should stay the Order until judicial review is complete.”

Viasat is a global communications company that believes everyone and everything in the world can be connected. For 35 years, Viasat has helped shape how consumers, businesses, governments and militaries around the world communicate. Today, the Company is developing the ultimate global communications network to power high-quality, secure, affordable, fast connections to impact people’s lives anywhere they are—on the ground, in the air or at sea. To learn more about Viasat, visit: www.viasat.com, go to Viasat’s Corporate Blog, or follow the Company on social media at: Facebook, Instagram, LinkedIn, Twitter or YouTube.