The U.S. is still experiencing robust growth in fixed broadband connections, driven predominately by the cable market, according to a new report published this week.  Meanwhile, download speeds are increasing faster than expected due to cable companies and new telco FTTH deployments.

U.S. broadband gains illustrated durable demand for wireline connections in the second quarter, allaying fears of a 2021 hangover, according to Kagan, a media research group within S&P Global Market Intelligence. While the 945,000 new broadband subs in second quarter 2021 fall short of the year-ago boom, that increase far exceeds the second-quarter 2019 figure that cable operators have been pointing to as a more likely template for current-year success.

The combined residential cable, telco and satellite broadband subscribers topped 109.2 million at the end of the second quarter, up 4.3% annually with nearly 4.5 million net adds year over year, according to Kagan’s full industry estimates.

The U.S. broadband market soared in the first half of 2020 as Covid-19 drove working from home to new levels and customers felt the need for more reliable – and faster – Internet connections. Kagan last year noted that the number of residential wireline subscribers with a broadband service of 100 Mbps or more increased by 5.5% in the first six months of 2020, compared with end-2019. 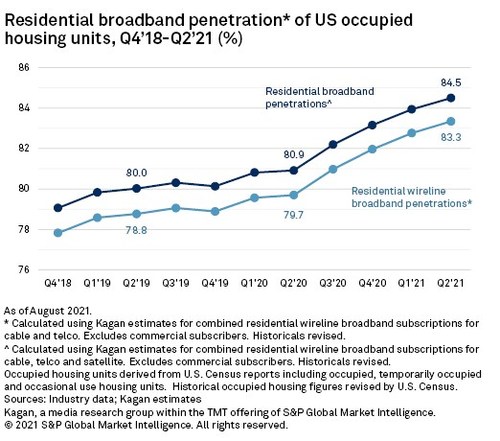 Kagan declined to share figures for growth in net broadband additions for Q2 last year, simply stating that the 2021 numbers “fall short of the year-ago boom.” However, Q2 this year was far ahead of the same period in 2019, which it – and the industry itself – would serve as a more accurate benchmark for future growth. In the second quarter of 2019, wireline broadband net adds came in at 339,000.

The overall residential broadband market in the US reached 109.2 million subscribers at the end of June, an increase of 4.3% year-on-year; net adds over the 12 months hit nearly 4.5 million. Again, Kagan did not provide comparative figures. As per the above chart, residential broadband penetration is now above 83%, rising to 84.5% if satellite broadband is included.

The cable companies are still leading the U.S. broadband market. 1.9 million net additions in the first half of the year across the residential and commercial sectors give cablecos/MSOs a 96% share, leaving the telco and satellite providers sharing the remaining 4%, or just under 80,000 customers.

With the satellite broadband companies together losing 24,000 customers over that period, that means the telcos probably signed up at least 100,000 new customers in the first half of 2021.

The Need for Speed:

As of June 30, Kagan estimates that 78.4% of residential wireline subscribers took download speeds of 100Mbps and above. With speed and bandwidth at the forefront of consumers’ minds, the 1Gbps tier logged the largest increase.

Subscribers taking 1 Gig or higher rose to an estimated 7.8% of the residential broadband universe in the second quarter of 2020, up from 4.3% at year-end 2019.

The under 25 Mbps tier fell to 2.7% of wireline broadband households or 2.8 million subscribers for whom slower speeds likely impeded in-home online activities, including entertainment, during the pandemic. The telco sector, still somewhat held back by legacy copper systems, accounted for the vast majority of the lower end speed category, with an estimated 87.2% of all wireline broadband subscribers in the below 25 Mbps category. 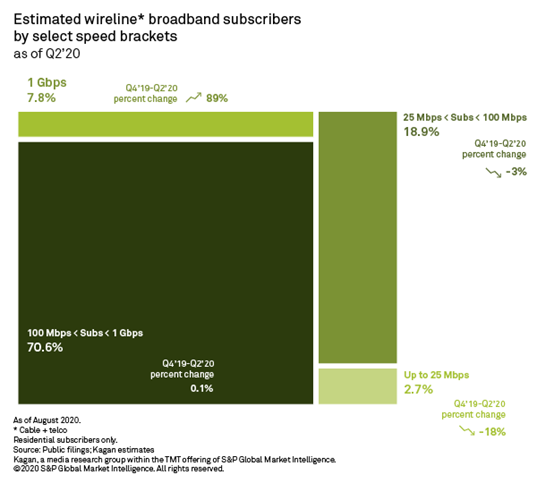 One thought on “Kagan: U.S. Broadband Market Continues to Grow”