Mobile Experts released a report that explores the state of Fixed Mobile Convergence (FMC) [1.] in the U.S. telecommunications market through 2024.

Note 1. Fixed mobile convergence refers to the ability of telecommunications companies to provide their subscribers with services that interact with and use both the fixed networks incumbent wire line and/or cable operators and the mobile/cellular networks of mobile operators.

The 60-page report provides a five-year forecast of the fixed and mobile broadband market, including service revenue, subscriber connections, fixed and mobile cost-per-GB, and pricing trends. The report focuses on the premium pricing for mobile services, or the ‘mobility premium.’

“Large tier-1 operators have long been exploring ways to interwork fixed and mobile networks for seamless voice, data, and video services. As mobile transitions to 5G, those tier-1 operators are driving the FMC architecture framework deeper into the network with 5G Core as the “anchor” and as fixed and mobile access networks get disaggregated and virtualized,” commented Principal Analyst Kyung Mun.

According to the report, the average U.S. household consumes more than 11 times more data over the fixed network as compared to mobile access. The COVID pandemic contributed to a peak in this trend last year as more Americans relied on their fixed networks at home. Despite this, U.S. consumers place roughly 20x more value on mobile broadband over fixed access according to the study from Mobile Experts, which compared service revenue generated from actual GB delivered.

“The FMC outlook in the U.S. is relatively modest, but based on the current dynamic in the market, technical FMC will grow gradually over the next few years as FMC leverages mobile network architecture as the framework,” stated Principal Analyst Kyung Mun.

“Key motivations for service providers to engage with FMC include cost savings, churn reduction, new convergent services, service bundling, and seamless handover between mobile and fixed services. This new report includes detailed breakdowns of each of these aspects of the growing market.”

As the Mobile Experts chart below shows, the leading carriers and cable operators dominate the percentage share of fixed and mobile broadband connections in the U.S. in their respective sectors. 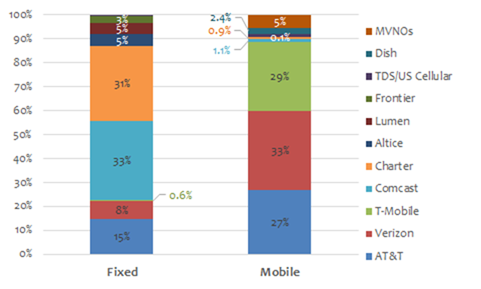 Mun said that even though most consumers spend the majority of time indoors in a stationary environment, the data captures how people are willing to spend more on the idea of being able to consume data while on the go.  “It’s kind of like an insurance plan,” he told Fierce Wireless. When users are at home connectivity is almost considered a given, but when out and about consumers want to ensure they’re not left without it. For example, if they were to get in an accident, Mun added.

“At this point, the dominant Fixed and Mobile operators have established ‘beach heads’ in each other’s ‘turfs’,” Mun said. “The fixed-mobile convergence (FMC) intensity will likely grow as each side gain[s] a more significant share over time.”

Mobile Experts expects the trend of deeper integration of 5G network elements to grow gradually over the next few years, particularly leveraging 5G core networks as the so-called anchor.

In the LTE days, Mun noted the IMS network – which can be thought of as the application layer network – was used to piece mobile and fixed networks together. Now in the days of 5G, major global operators are leading a push to anchor the two access networks via the 5G SA core network.

“We believe it’s a very long game between the fixed operators and the mobile operators, but at some point in the future we expect there will be a convergence,” Mun said.  That’s from an M&A perspective or for those operators that have both fixed and mobile networks to converge the elements.

For example, Verizon is using their 5G network both for mobile and to extend fixed wireless access (FWA) service. It disclosed adding 55,00 FWA customers in Q3 for a total of 150,000. Earlier this week, Verizon expanded its 5G FWA service to homes and businesses in Dayton, Ohio and Jacksonville, Florida.

Mun believes the concept of fixed mobile convergence “is probably more applicable for AT&T at this point.” That’s because AT&T has a larger fixed network footprint and has been vocal about plans to expand their fiber footprint.  AT&T expects to increase the number of homes passed with fiber to 16.5 million by the end of the year and currently has 5.7 million fiber customers.

Mun said legacy wireline telcos, such as AT&T, Lumen (formerly CenturyLink) and Frontier, aren’t as competitive as cable for fixed line access because they have networks utilizing legacy copper and DSL. But again, each have been making public statements about concerted fiber investments over the next few years.  In particular, AT&T has touted its big fiber build-out for some time now.

“Even for their MVNO business, it’s more advantageous for [cable MVNOs] to have their own 5G core over the long-term,” he said.  “Because if you have your own 5G core you have a little more direct control over how you provision and direct traffic for their mobile subscribers, even though their base is very small today.”

It’s a long-term trend – Mun suggests a 5 to 10-year timeline. The reason isn’t technology, which he categorized as a small part of the conversation, since open RAN, software-defined networking and virtualization trends help facilitate convergence by providing the opportunity to reconfigure when network elements are disaggregated and reconstituted, Mun said. Instead, Mun sees the timeframe as mostly driven by competitive dynamics and the regulatory environment, noting the current administration likely wouldn’t favor major market consolidation moves.

Over time, as mobile carriers make more inroads in the fixed wireless market and cable operators introduce more disruptive pricing on the wireless side “that dynamic could certainly change,” Mun added.

Mobile Experts provides insightful market analysis for the mobile infrastructure and mobile handset markets. Our analysts are true Experts, who remain focused on topics where each analyst has 25 years of experience or more.

Mun noted operators spend billions of dollars in capex to keep their networks up to snuff to handle data demands, as Mobile Experts detailed the competitive dynamics between fixed broadband and mobile operators as well as the trend of fixed mobile convergence (FMC).

“They’re slowly growing that base,” Mun said. “So they’re in essence, one can postulate that they’re setting up their ‘beachhead’ if you will on the wireless side.”