The Federal Aviation Administration (FAA) is giving the aviation industry more time to update legacy radio altimeters that could potentially be impacted by terrestrial 5G operations in C-Band spectrum.

In a notice of proposed rulemaking (to be published January 11, 2023), the FAA said that it remains concerned about the impacts of the C-Band operations on flights, including triggering false warnings from flight systems—particularly as more 5G is deployed across the entire band, and with more than 20 additional operators expected to start operating in the band later this year.  This new Notice of Proposed Rulemaking (NPRM) lays out a timeline for retrofits by February 2024.

SUMMARY: The FAA proposes to supersede Airworthiness Directive 2021-23-12, which applies to all transport and commuter category airplanes equipped with a radio (also known as radar) altimeter. AD 2021-23-12 requires revising the limitations section of the existing airplane/aircraft flight manual to incorporate limitations prohibiting certain operations requiring radio altimeter data when in the presence of 5G C-Band interference as identified by Notices to Air Missions.

Since the FAA issued AD 2021-23-12, the FAA determined that additional limitations are needed due to the continued deployment of new 5G C-Band base stations whose signals are expected to cover most of the contiguous United States at transmission frequencies between 3.7-3.98 GHz. This proposed AD would require revising the limitations section of the existing airplane/aircraft flight manual to incorporate limitations prohibiting certain operations requiring radio altimeter data, due to the presence of 5G C-Band interference.

This proposed AD would also require modifying certain airplanes to allow safe operations in the United States 5G CBand radio frequency environment. The FAA is issuing this AD to address the unsafe condition on these products.

Originally, the agency had targeted a phased approach that required operators of regional aircraft with the most susceptible altimeters to retrofit them with filters by the end of 2022. AT&T and Verizon, meanwhile, had agreed to delay 5G C-band deployments near airports until July 2023, at which time air carriers were expected to have completed all the retrofits to mitigate possible 5G C-band spectrum interference.

Concerns about the impacts of 5G in C-Band to radio altimeters delayed the initial deployment of C-Band spectrum by AT&T and Verizon roughly a year ago. The worry is that the old altimeters, even though they operate in a completely different spectrum range, were not designed to filter out strong terrestrial cellular signals, leading to out-of-band interference. That interference could lead to the radars not being able to accurately gauge an aircraft’s height-above-ground, which could lead to aircraft crashes—particularly in fog or other situations where pilots would not be able to visually confirm whether height information was correct. As a result, Verizon and AT&T voluntarily agreed to operational tweaks near certain airports, including 5G transmission at reduced power levels, or tilt adjustments to cell sites to direct energy away from protected areas.

The FAA said that it has been able to review data from “dozens of alternative method of compliance (AMOC) requests, demonstrating that these radio altimeters can be relied upon to perform their intended function when operating beyond a certain protection radius around 5G C-Band transmitters.” The agency said that its first related actions on C-Band protection were based on conservative estimates of impacts, and that it initially sought to protect against interference during take-offs and landings within a two-nautical-mile circle around the ends of runways.

“After some time and an improved understanding of the C-Band signals and their effects on specific radio altimeters, the FAA was able to reduce the protected area around the ends of runways,” the agency said int he NPRM—first, by defining a rectangular protected airspace, then shifting that to a trapezoidal protection zone that allowed for expanded neighboring 5G signals. “The FAA is now able to assess the 5G C-Band transmissions’ impact to aviation operations in a specific area, taking into account the particularities of the signal and the airport environment. This assessment process is the Signal in Space (SiS) analysis. It includes a 3-dimensional model for the runway safety zone and considers base station heights and terrain around the airport,” the FAA said.

The FAA said that since it began soliciting reports of potential C-Band interference impacts, it received more than 420 reports of radio altimeter anomalies happening within the areas of known 5G C-band deployments. Most of those—about 315—were ultimately determined to have other causes and resolved through normal operational safety procedures, the agency said. But, it added, “for roughly 100 of the anomaly reports occurring within NOTAM areas, the FAA has excluded other potential causes for the anomaly, but could not rule out 5G C-Band interference as the potential source of the radio altimeter anomalies.” 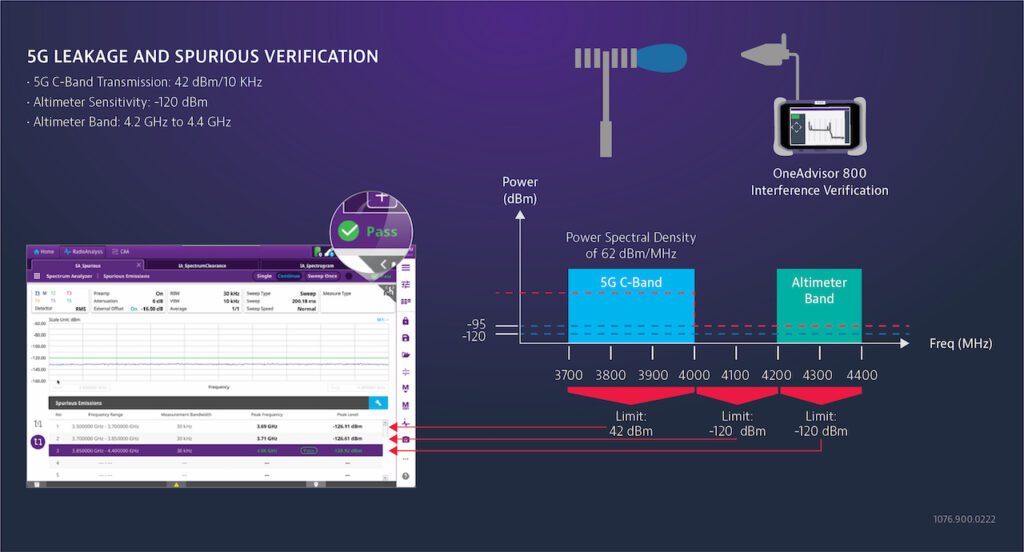 “The radio altimeter modifications that would not require a substantial system redesign, allowing aircraft operators to readily replace radio altimeters or install filters that allowed the aircraft to operate safely in a mitigated 5G environment,” the agency said, adding that some altimeters will also be able to demonstration that level of performance without any modification. The FAA estimated that the modifications would affect about 7,993 aircraft registered in the U.S.